On the Edge: Living the Anthropocene EWU Art Exhibit 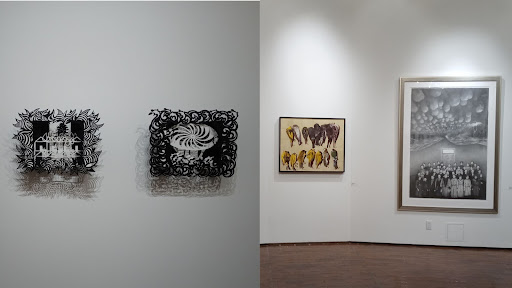 Reid's art is displayed on the left and Niblack's is on the right.

In an exhibition at the EWU Art Gallery called On the Edge: Living the Anthropocene, artists Ann Chadwick Reid and Natalie Niblack capture the harsh realities of climate change in a way that inspires viewers to fight for a better future.

Reid and Niblack are both full-time artists who reside in Skagit Valley, an area that, like much of the Pacific Northwest, seemed relatively sheltered from the effects of climate change until recently.

While bringing the show to Eastern, there was flooding occurring in Skagit Valley, and prior to that, the two took the art to be displayed in Oregon and had to drive in the smoke caused by wildfires in the area.

“In both instances with the show, we’ve been in a situation where we’ve had a first-hand experience of climate change where we live,” said Reid.

According to EWU Art Gallery Director Joshua Hobson, the artists’ focus on climate change in their art was part of what made him want to display it at Eastern.

“This issue is very timely and important, especially now,” he said.

The two artists started focusing on climate change in their art recently due to the world seeming more fragile, and the effects of climate change becoming more immediate every day.

“We feel pretty passionately that we have to do what we can right now, because otherwise it’s not going to work or be sustainable for the human race,” said Niblack.

Niblack’s art, specifically some of her oil on linen and graphite on paper pieces, recently has focused on birds and the effects that natural disasters brought on by climate change have had on their lives and routines, as well as the impacts that oil and coal refineries and large corporations have on the environment.

“I got very angry at corporations when I took a trip across the country,” she said, “and I decided that I would make them the main characters in some of my paintings and drawings.”

And Reid created papercut dioramas that tell stories about climate change and its impacts on our world.

“I felt like it was something that would attract the viewer to the piece because of its complexity in terms of the shapes and the way that the shadows are created,” she said when talking about her piece Flood, “…but then as you look into it, it’s not necessarily a pleasant thing that you’re looking at.”

The two hope that the art will inspire students and faculty to learn more about climate change and take action, whether that is in the form of attending a protest, signing petitions, or contacting local representatives about climate and environmental issues.

“I think it’s more vital and more important for younger people to be paying attention, because it is your future,” said Niblack. “We hope that more people will pay attention.”

And according to a student at the exhibit, the art conveyed some of the emotions and concerns that he feels when thinking about climate change, but it does so in a way that is thought-provoking and inspiring.

And Hobson hopes that the Art Gallery continues to elicit those kinds of responses from students, faculty, and community members who view the current and future exhibitions on display.

And to keep up with the artists, check out Reid’s and Natalie’s websites, or follow them on Instagram (@annchadwickreid and @natalieniblack).