EWU is victorious in athletics 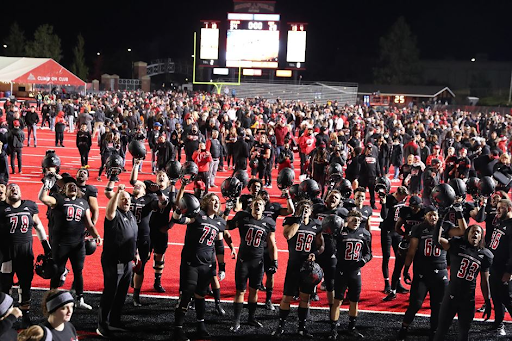 EWU players celebrate after EWU defeated the University of Montana 34-28 on Oct. 2

It was the first playoff game EWU has hosted since the championship run during the 2018 season.

Senior-redshirt quarterback Eric Barriere threw for 283 total yards on 20-34 passing with a touchdown and an interception. Barriere now moves into third all-time for total offense for FCS, as well as sixth all-time in passing yards.

EWU came out slow in the first half and trailed NIU 9-3 for a greater part of the half. Yet, two key interceptions made by Keshaun King and Marlon Jones Jr. helped propel EWU back into the game. To note: since 2010, EWU is 66-1 on the red turf when winning the turnover battle.

The EWU football team will now travel to Missoula, MT on Dec. 3 to take on their arch-rival the University of Montana. EWU won this year’s regular season match-up against the Grizz 34-28 on Oct. 2.

The EWU men’s basketball team defeated Washington State University for the first time since 1997. EWU was led by a pair of freshman standouts, forward Ethan Price and guard Mason Landdeck, who combined for 36 of EWU’s 76 total points.

EWU men’s team now takes on Southern Utah University on Dec. 2 for the first Big Sky match-up of the season for either team. It will be the first home game for EWU in nearly two and a half weeks.

The EWU women’s basketball team had a game against Multnomah University that was originally scheduled for Nov. 24, but was then postponed to Nov. 28. Yet, the game was cancelled at the last second once again. The reasons for the cancellations were COVID-19 related that the Multnomah team needed to deal with before playing.