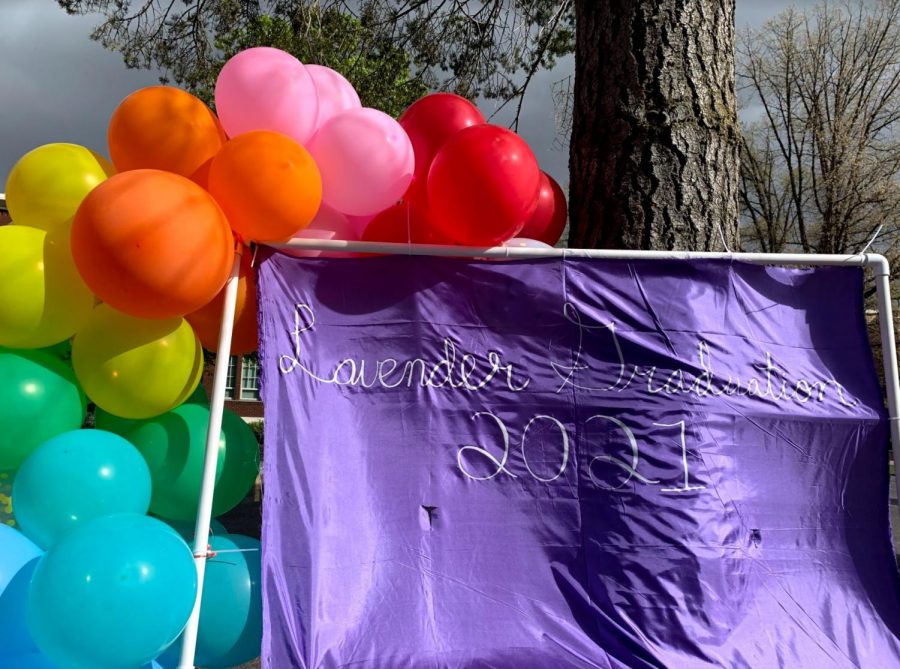 The tradition of honoring graduating LGBTQ+ students and their accomplishments has been celebrated by universities worldwide at Lavender Graduation ceremonies. EWU’s Pride Center held EWU’s ceremony on May 7 in the parking lot outside of Hargreaves hall.

The first ever Lavender Graduation ceremony was held in 1995 at the University of Michigan. The creator, Dr. Ronni Sanlo was kept from attending her children’s graduations due to her sexuality. The Human Rights campaign explains the event as “a cultural celebration that recognizes LGBTQ students of all races and ethnicities and acknowledges their achievements and contributions to the university as students who survived the college experience.”

Lavender is used because of its significance in the LGBTQ+ civil rights movement. In Nazi Germany, gay men were kept in concentration camps and were required to wear a pink triangle. Lesbian women would be required to wear black triangles to idenity them as political prisoners. During the LGBTQ+ civil rights movement, both triangles were incorporated in prideful messages and symbols of pride. The two together were thereafter considered lavender.

Upon arrival, graduates were greeted by Vanessa Delgado, interim director of Student Equity. Delgado gave each graduate their certificate and lavender graduation stole, featuring a pride design as well.

The certificate read “The Pride Center and members of the LGBTQ+ and ally campus community at Eastern Washington University wish to congratulate [graduate’s name] on a successful degree completion.”

Each certificate was signed by Delgado and Nick Franco, interim associate vice president of Student Equity, Belonging and Voice.

After a graduate received their certificate and stole, Delgado would announce the graduate’s name and congratulate them on their accomplishments on a speaker for all attendees to hear.

After each announcement from Delgado, there would be a loud cheer from everyone there. There was a group of individuals with signs and posters who spent the entire event cheering on graduates.

There was an area for taking photos with a lavender backdrop and rainbow balloons. Graduates could take their own photos and/or have photos taken by the SAIL photographer that was there.

“We had to be outside,” Delgado said, referring to where the event was held. “But we’re trying.”

The ceremony has been held in several locations over its past several years at EWU, including Showalter and the PUB. But conducting the event outside is new.

While perhaps different than the event has been in the past, attendees seemed pleased with the set up. Students needed to sign up in advance to receive the stole and certificate. Most of them attended the event, and each of them was shown support.