Recap of EWU sports this week 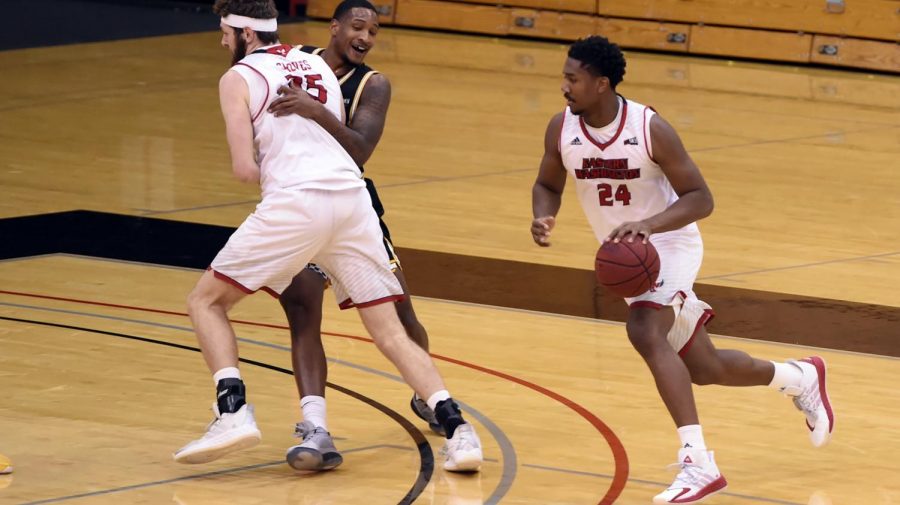 Sophomore Justin Roosma set the school record for the fastest 3,000-meter steeplechase with a time of 8:54.69. The previous record was 8:56.31 which was set back in 2005 by Branden Fuller.
Junior Colton Kautz placed third in the hammer after setting a personal-best of 193-2.
Sophomore Zach Klobutcher secured first in pole vault with a mark of 16-0 ½.
Junior Joe Gauthier finished second in the 200-meter with a time of 22.03.
Senior Quintin Porterfield placed third in the long jump with a new PR of 23-1 ¼.
Junior Gavin Lee finished third in the javelin with a PR throw of 199-4.
Sophmore Alex Bishop had a third-place finish in the high jump after clearing a mark of 6-4 ¼.

Junior Vernice Keyes placed second in the hammer with a mark of 198-2 which also put her at third place for the longest throw ever in school history.
EWU women’s pole vault swept the top three spots as freshman Savannah Schultz and senior Morgan Fossen both cleared 13-4 ½, while junior Katrina Terry placed third with a vault of 12-6 ¾.
Freshman Samiah Kuntz came in seventh place in the 200-meter as she also set a new PR time of 25.21.
Sophomore Alyssa Hoffman finished in sixth place with a time of 1:03.66 in the 400-meter hurdles which set a new PR for her.
Sophomore Madelyn Knight finished third in the 100-meter hurdles with a time of 14.85.
Freshman Samiah Kuntz and Sophomore Katie Petsch secured second and third in the 100-meter with times of 12.16 and 12.25.

Other notable news for the track team is that the Eagles feature five vaulters with marks over 12-feet this season. They have average 13-2 to rank EWU eighth this week in the Event Squad Rankings posted weekly by the US Track and Field and Cross Country Coaches Association (USTFCCA). Eastern has ranked as high as seventh this season. The five vaulters include senior Morgan Fossen, Sophomore Savannah Schultz, and senior Katrina Terry as the big three with junior Hally Ruff and sophomore Rosalie Folger-Vent helping to get to that ranking.

After EWU lost in the first round of the March Madness tournament to Kansas, Former head coach Shantay Legans accepted a new head coaching position at the University of Portland. Legans ended up taking assistant coaches Bobby Suarez and T.J. Lipold in his departure but it did not stop there, three EWU players also left with him including, Jack Perry, Mike Meadows and Tyler Robertson. EWU also saw a handful of other players leave to different schools such as the Grove brothers who both transferred to Oklahoma, Jacob Davison transferred to Cal Poly, and Kim Aiken Jr. left for Washington State. This left newly hired head coach David Riley who worked under Legans at Eastern to pick up the pieces. Riley has done a great job so far as he has brought in four new players for next year’s roster.

Rylan Bergersen is coming from Central Arkansas, he received third team All-Southland Conference twice and played at BYU before that.
Angelo Allegri is joining the team from UNC Greensboro after helping them to a league title in his time there.
Imhotep George came from Allegany College in Maryland after he averaged 18.8 points.
Casey Jones from Wasatch Academy in Utah who helped lead them to the GEICO Nationals.

EWU is still expecting two freshmen next year who committed in November being Mason Landdeck and Ethan Price.

Eric Barriere would be the fourth player in school history to win the Walter Payton Award as he is now one of the three finalists. The award is given out to the top offensive player of the year in the NCAA Football Championship Subdivision. The other finalists are quarterback Cole Kelley of Southeastern Louisiana and running back Julius Chestnut of Sacred Heart. The winner will be announced on an FCS National Awards show on Saturday, May 15. The most notable players to have won it in the past consist of Steve McNair, Tony Romo, Brian Westbrook, Jimmy Garoppolo, and EWU’s very own Cooper Kupp. Barriere also finished fifth for the award in his junior year.

EWU’s Tennis team went 5-1 in their last six matches, but it wasn’t enough as the season concluded this weekend after they were defeated by Weber State in Big Sky Semifinals, with a final score of 4-2. “Today was no different than how we have been playing all season with no give and no quitting, which was everything that I asked of them. It is tough to get defeated, but credit to Weber State because they played tough as well. We had good chances and the effort was there and I am proud of the team for that,” said head coach Dustin Hinson. “I am excited about our freshman Jennifer Kida at the No.1 singles spot and her future here with us. She has gotten better throughout the season and finished the season strong. Also, a really good job with our senior captains at the No.1 doubles spot by going out and clinching the doubles point for us.”

EWU head golf coach Brenda Howe has announced a new addition to the program in transfer Meghan Singh. Singh was a member of the Junior Golf Association of Arizona where she was a JGAA Player of the Year for the 15-18 age group in 2018. In 2018, she won three tournaments and notched eight top-five finishes in nine events. She earned second-place finishes at the Antigua Milt Coggins AZ and the Mesa City Jr., to go with a third-place finish at the Thunderbird Junior Classic. Her first-place finishes came at the prestigious IMG Academy Junior World Qualifier, the Phoenix City Junior Championship, and the PING Arizona Junior Masters.