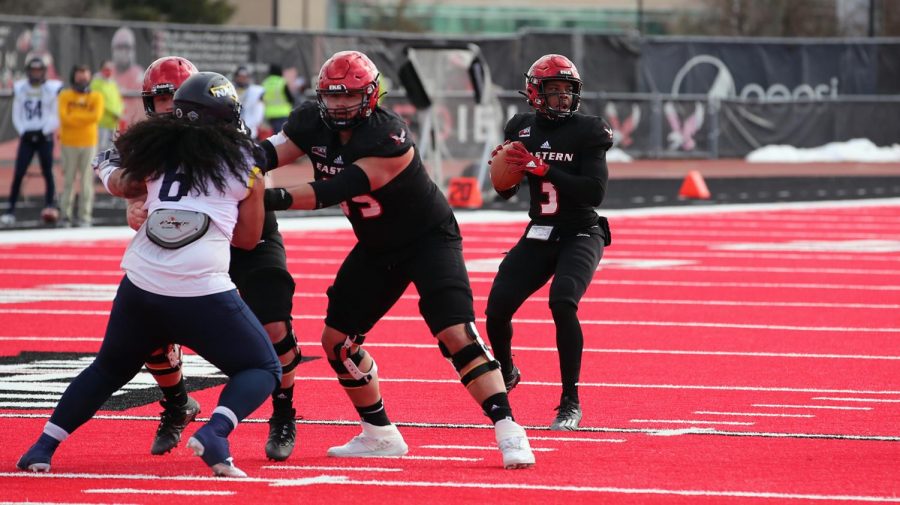 EWU QB Eric Barriere threw for over 400 yards for the 4th time in his EWU career.

The unorthodox 2021 football season has come to an end for the EWU football team.

EWU finished (5-2) overall. The Eagles dropped the opening game of the season against Idaho, 28-21, which will be remembered for the infamous missed field goal call which went viral on Twitter for several days.

EWU would then go on to win five straight games against Northern Arizona, Idaho State, Cal Poly, UC Davis, and a rematch against the Vandals of Idaho.

This winning streak propelled EWU into the FCS playoff picture. The FCS playoffs for the 2021 season were reduced to just 16 teams, with only the six conference champions clinching a spot.

EWU did not win the Big Sky regular season title, and thus was one of the ten teams selected at-large by the FCS committee of former coaches, pundits, writers, etc.

EWU was matched up against the powerhouse of North Dakota State University, who has won eight of the last nine National Championships.

EWU would pull out to an early 20-7 lead, with 13 minutes left in the second quarter. For the rest of the way, EWU would be shutout and outscored, 35-0 by NDSU.

NDSU was without their star quarterback Trey Lance, who chose to opt out of the spring season to prepare for the NFL draft.

All year NDSU had inconsistent play at quarterback, and chose to start Freshman Noah Gindorff against EWU on Saturday.

Gindorff would only throw for 50 yards, compared to the 472 yards the Bison would pick up on the ground.

Senior-redshirt quarterback Eric Barriere would throw 246 yards, compared to 61 yards the Eagles would pick up on the ground. (Barriere also reached 10,000 total career yards in the first half against the Bison)

EWU is now 1-4 against NDSU, with EWU’s lone win being a part of the 2010 National Championship run.

EWU’s first game of the 2021 fall season, is scheduled to be played at Las Vegas, Nevada against the University of Nevada Las Vegas on September 2, 2021.