Year of the Transfer? 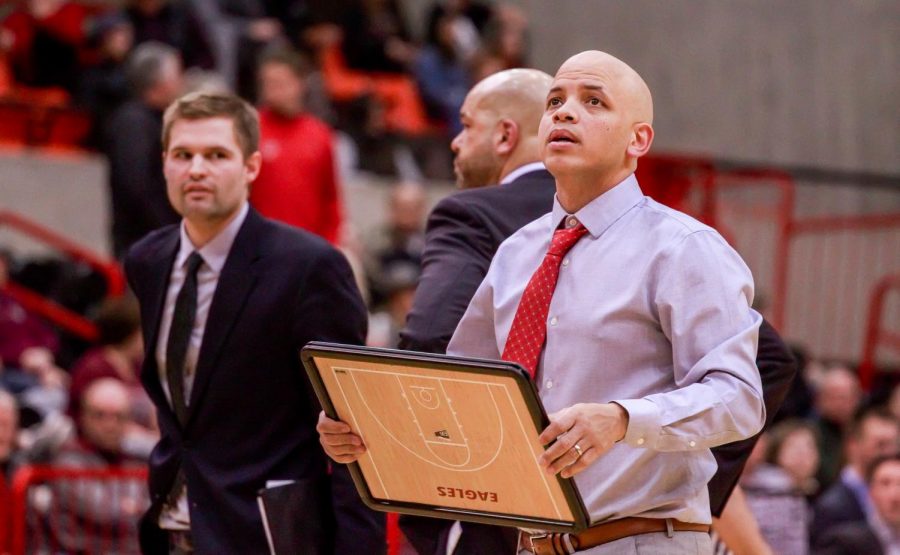 EWU head coach Shantay Legans walks to the bench in the Eagles' first meeting with Montana on Jan. 10. EWU lost to the Grizzlies 68-62 in the Big Sky Conference Tournament championship game for the second straight year in 2019.

Former EWU head coach, Shantay Legans, who led the program to its third appearance in the NCAA Division I tournament, left EWU on March 23, taking the job at the University of Portland.

It appears however, that Legans is not the only former Eagle to leave Cheney for the City of Roses.

Seven of EWU’s eight players who played significant minutes last season all entered the transfer portal in the past two weeks.

Redshirt sophomore guards Michael Meadows and Tyler Robertson have both officially transferred from EWU to the University of Portland.

Jacob Davidson, who is one of the top 10 leading scorers in EWU history, has transferred to Cal Poly.

The men’s basketball team is not the only program at EWU that is seeing players leave.

EWU standout linebacker Chris Ojoh, who was leading the team in tackles this season, has entered the transfer portal during the middle of the season.

Other schools are facing a max exodus of transfers as well.

Northern Arizona stand-out Cameron Shelton, who led the conference in scoring, has entered the transfer portal, as well three other NAU players.

Montana State guard Mike Hood, who led the MSU upset over Southern Utah in the Big Sky semifinal game, has entered the transfer portal among three other MSU players.

Two of EWU’s three best scorers have entered the transfer portal. Grace Kirsher and Kennedy Dickie, who both averaged double figures, entered the portal a week ago.

As the final game of the 2020-2021 collegiate basketball season comes to a close on April 5, the season of transfers is likely to exponentially grow.