139 Years of Education With Eastern 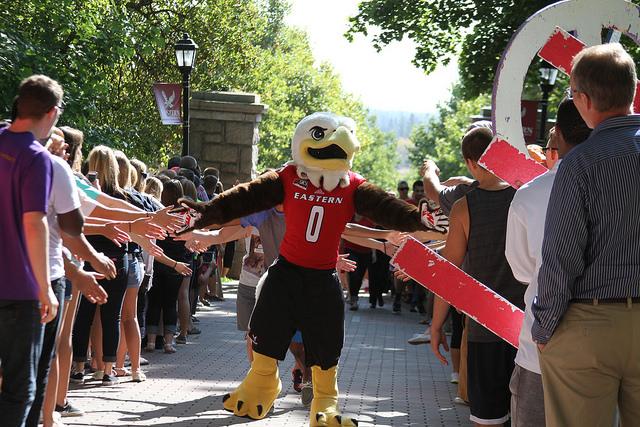 Swoop, EWU mascot, leads new students toward Showalter Hall at the Passing Through The Pillars event on Sept. 22

In the early morning of April 3, 1882 in Cheney, WA., excitement was in the air as Eastern Washington University would open its doors for the first time as the Benjamin P.Cheney Academy. Little did the pupils and teachers of this modest school know, this academy would one day become one of the largest educational institutions in Washington. As Eastern approaches its 139th anniversary, we’ve decided to take a lookback on the history and success of EWU.

The institution originally started as a combination of an elementary school and junior high for the small town of Cheney in 1882. The town originally showed great promise due to the nearby planned depot for the Northern Pacific Railroad, however this would eventually be overlooked as the nearby city of Spokane Falls grew far more rapidly. This combined with a large number of students leaving to study at Cheney’s public schools would lead to the temporary closing of Eastern in 1890.

It wouldn’t be closed long. Later in October of 1890, Eastern would reopen as an official State Normal School (a school used almost exclusively for teacher training). Throughout the next 50 years, Eastern would face and overcome many challenges that would only strengthen its spirit.

In 1891, a two-story addition to the original school building would catch fire, exposing Eastern’s initial lack of funding to repair it. Yet the school prevailed. The people of Cheney would come together to raise money to keep the school running.

In 1912 another fire would break out in the school’s main building, completely destroying it. Yet the school prevailed. They would continue teaching as the school built their new main building. Finished in 1915, it would eventually become known as Showalter Hall.

In 1933 the school would be granted the rights to officially grant Bachelor of Arts in education degrees (previously only being allowed to grant teaching certificates). This would help push Eastern to the next level, being renamed as the Eastern Washington College of Education in 1937.

Following the end of World War 2, the school would feel a constant string of growth for the next few decades. New buildings, increased attendance, and even being certified bythe state as a full-fledged liberal arts college in 1947. Eventually the college would settle on the name Eastern Washington University in 1977.

To mark this celebratory occasion and the years of success Eastern has seen, the school has announced Giving Joy Day on April 2. Instead of focusing on the school and its many milestones, Giving Joy Day encourages many to donate to the Eagle On Initiative. These contributions go directly towards grants, scholarships, and other various funds that allow students who struggle financially to continue forward in their education. It’s programs like this that help keep eagles flying, as we look forward to another 139 years of education and success.