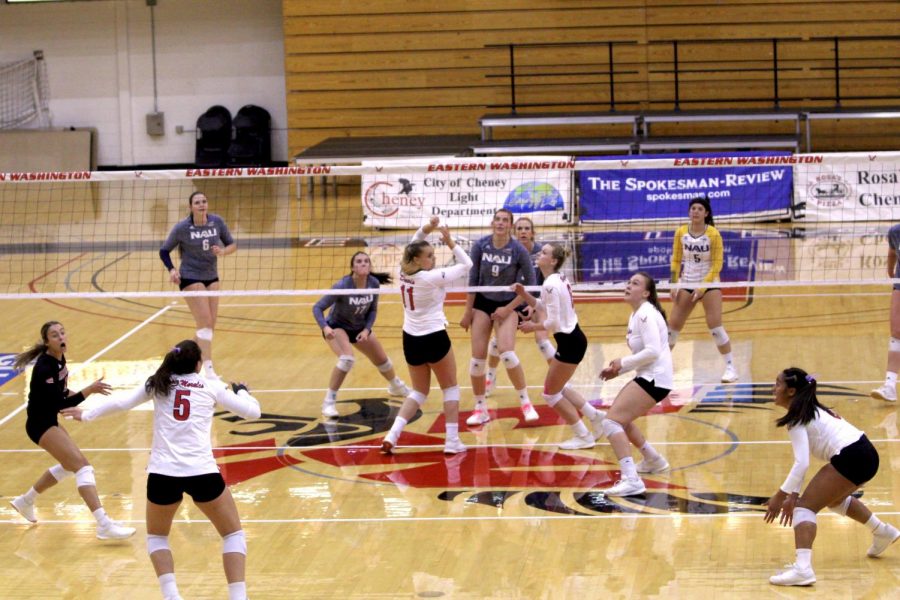 EWU’s women’s volleyball played their two-game series against the University of Northern Colorado and lost in both matches. The Golden Bears won the first game in a final score of 3-1. The second game was taken by the Bears again but ended up being decided in the fifth set with a final score of 16-14.

Before the series against UNC, EWU had a record of (1-2) overall and (0-2) in conference games while UNC held a (1-1) record in both conference games and overall. After the series, EWU sits at the bottom of the Big Sky Conference with a record of (0-4, 1-4). As for UNC, they are now tied for 3rd in the conference sharing that place with Northern Arizona and Sacramento State who all have a (3-1, 3-1) record.

The second game was much closer with EWU winning the first set 25-23. UNC answered back, winning the second set 25-13. EWU would then take set three 25-21. UNC won the next set 27-25 to force a fifth and final set which they ended up winning in a final score of 16-14. Blotzer led the team in points again with 16.5. Three other players scored double digit points, sophomore Renata Lopez Morales (12), sophomore Ka’ehukaiiha’amaina’e Keala (11), and redshirt sophomore Maya McClellan (10).

EWU’s next game will be at home against Portland State on Feb. 7. They are currently tied with Southern Utah at 9th place in the conference. Both teams have a record of (0-2, 1-3) on the year. For those interested in watching the game, it will start at 2:05 p.m. and will be broadcasted on Pluto TV, channel 1053.