Senior feature: The story of a first-generation engineer 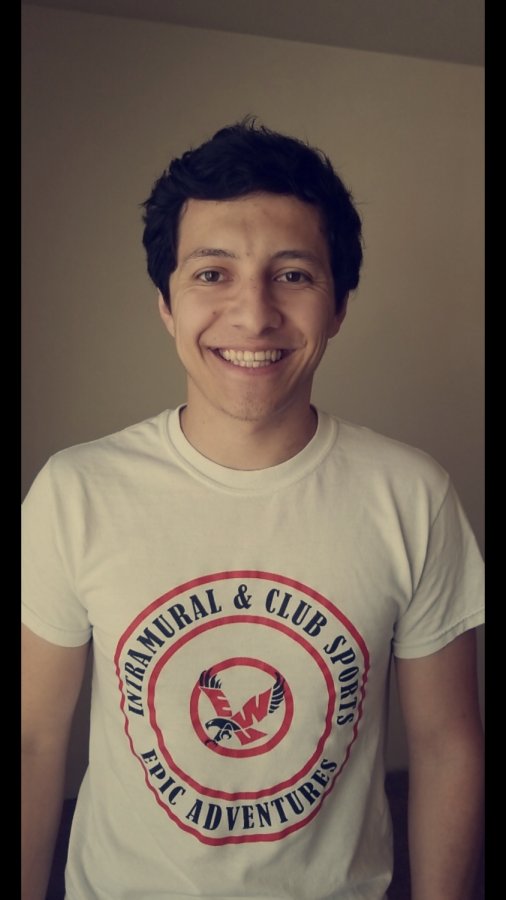 Throughout his high school career, Miguel Calvillo pictured himself graduating and going right into the workforce as an electrician. In his senior year, though, a teacher convinced him to attend college.

Calvillo decided to give EWU a try. At a school that prides itself on serving first-generation college students, he soon became a prime example.

He was so successful at EWU, in fact, that he’s graduating with a bachelor’s degree in electrical engineering with a focus in embedded systems design and a 3.84 cumulative GPA.

When Calvillo moved into Pearce Hall, he had never even been to Cheney.

“The first week was actually really exciting,” Calvillo said. That week I actually met my friends who would later be my roommates.”

“It was a lot of fun,” Calvillo said. “I made a lot of friends and they made me feel like I was part of the campus community.”

“Right away I could tell that he was a funny guy,” Crystal Medina, an adviser for Eagle Ambassadors, said. “He has a lot of personality … very charismatic … you could definitely tell he was not afraid to crack a joke.”

Medina said Calvillo is the type of student to take his school work seriously, and isn’t afraid to help those in need and was always a great worker for Eagle Ambassadors.

Medina said her favorite memory of Calvillo was when all the employees at Eagle Ambassadors took part in an activity, where participants needed to pull out a random thing in your bag and talk about it for a minute to help the employees develop public-speaking skill.

“He gave the most elaborated story about the object he had picked out,” Medina said. “He just went on and on and on … we thought it was a true story … and at the end he said that none of it was true.”

Calvillo was really relatable to students while working for Eagle Ambassadors, according to Medina.

“When he has the opportunity for his personality to shine,” Medina said, “he totally shines.”

Associate professor Uri Rogers, who teaches a variety of subjects in the engineering program, said he and Calvillo developed a great mentor relationship. He said Calvillo has matured a lot over the course of time they’ve known each other.

“He didn’t have an understanding of how the world works or how education works,” Rogers said.

According to Rogers, Calvillo’s confidence grew over time as well. He said Calvillo had to start in basic math rather than calculus because of the poor education he received in high school.

After a while, Rogers told Calvillo that he and his friends were studying so hard, that he was afraid they would all get burnt out.

“Getting the perfect grades at the expense of your health is maybe not the best thing,” Rogers said. “He refocused … and I think he’s a happy person now.”

One of the most exciting and saddest moments of Calvillo’s EWU career was when he and his friends studied together for the last time.

“It wasn’t until last quarter we had our last study session together,” Calvillo said, “we realized after this class it was over …  it was just going to be our capstone, and we’re done.”

He said it was a reality check that they would never get to do that again together.

One of the ways Calvillo said he’s grown over the course of his EWU experience is becoming more professional.

“What EWU taught me is that it’s nice to be goofy and be yourself,” Calvillo said. “But they also gave me the skills to know when to be professional.”

Madrigal said that she and Calvillo have been dating for almost nine years.