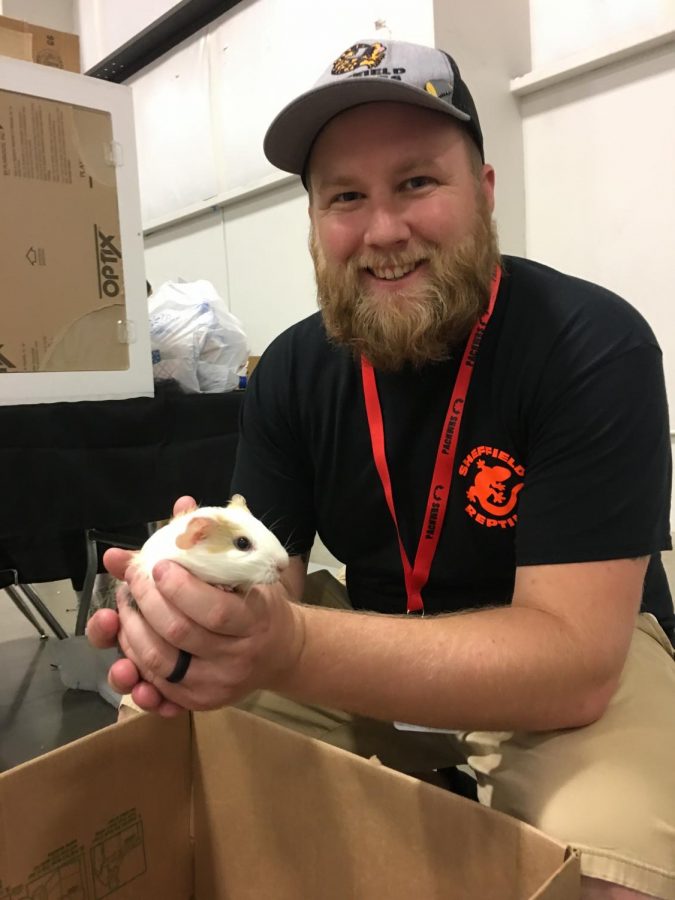 By the time retired United States Air Force airman Hunter Sheffield arrived in Eagle Territory, he carried with him the knowledge he’d gained while serving in Qatar and Afghanistan. Sheffield graduated from EWU in Winter 2020 with an Education degree and a Special Education minor.

Born in San Diego, raised in Libby, Montana, and now in Cheney, Sheffield is following a drive for teaching. He hopes to tie that in with another passion he’s had his whole life: A passion for animals.

“I always grew up with a passion for animals,” said Sheffield. “As a kid I actually wanted to be a vet.”

Kathleen Sheffield, Sheffield’s mother, said this love for creatures goes back to as early as kindergarten.

“He knew every animal, probably in the world,” said Kathleen Sheffield with a laugh.

Teachers were astounded by Sheffield’s wealth of knowledge about his animals, Kathleen Sheffield said. Growing up, Sheffield was surrounded by a fairly atypical cast of pets.

“Did he tell you had an emu as a pet?” said Kathleen Sheffield. “Peacocks, rabbits, turkeys … he honestly was very instrumental in taking care of them.”

On the move between San Diego and Libby, Sheffield saw a car strike a bald eagle on the highway. Acting fast, his father pulled the car over so Sheffield could aid the hurt bird. It didn’t take Sheffield any time to think; all he did was act. Sheffield and his father safely secured the injured animal and took it to a nearby town, where it could be properly looked at. There was no direct reward for this, just Sheffield’s desire to help a creature in need.

Sheffield got into the animal business as a boy by selling guinea pigs to a local feed store. After this, the pieces began to fall into place.

This hobby and appreciation for animals spurred Sheffield to start his own small business, Sheffield Reptiles. His business keeps, breeds and sells reptiles and exotic pets. Sheffield runs the entire ship on his own.

“I have a pretty large collection of snakes, lizards and other creatures that I sell to people locally,” said Sheffield. “I have snake eggs that should be hatching soon, blue tongued skinks that are getting ready to have babies, and I have prairie dogs for sale right now.”

Some of Sheffield’s most inspiring connections have been underprivileged kids without the best lives. Due to histories of violence, issues with drugs, and poor living conditions, these kids weren’t afforded the secure and pet-filled childhood Sheffield was.

“Two summers ago, I worked for a youth center in the Hillyard district,” said Sheffield. “I brought a bunch of animals, and it’s always fun because these kids don’t have any opportunities to ever see anything like this, let alone touch [them].”

Sheffield has shown off his prized critters at reptile shows in Spokane, Seattle, Portland, Chico, Chicago and even overseas in Qatar and Afghanistan during his time with the Air Force.

“He brought one snake [into the Veterans Center] once because he was taking it to one of his classes,” said Dave Millet, director at the Veterans Resource Center. “He snuck one in in a big tupperware box.”

Millet was Sheffield’s boss during his job working for the Veterans Center at EWU.

“He came to our office, originally as a new student because our office processes [Veterans Affairs] educational benefits,” said Millet. “Then soon thereafter, maybe a quarter or two after he started, we interviewed him and hired him as the work study student at the Veterans Resource Center.”

Sheffield found his first home at EWU among his peers at the Veterans Resource Center.

Since Sheffield served with the Air Force for five years, he was into his 20s by the time he arrived at EWU as an academic freshman. Being dropped into freshman-level classes with 18 year olds, Sheffield had a tough time making connections with his classmates.

“Being older than all of my peers … I didn’t really connect with a lot of the kids that were in my classes,” said Sheffield. “So, being in the Veterans Resource Center … it was nice to have a job that helps people as well as that social aspect of actually connecting on campus.”

Sheffield said people with similar lifestyles were the key to finding his home at EWU. Millet echoed similar sentiments, describing how once Hunter opened up, he was a sweet guy and a great friend.

“[When someone has] the same kind of life experiences as you, it makes things a lot easier,” said Sheffield.

After Sheffield was provided a place he could belong, he began to set in motion his future as an educator.

“I certainly didn’t know what I wanted to do [right out of highschool],” said Sheffield. “I went for a science kind of education degree, but being so far removed from high school I was really rusty in basic science … then following a general education route, I fell in love with it one day. It just clicked.”

Hunter’s wife Rachel is also an educator, and they greatly supported each other’s endeavors at EWU.

Sheffield said he wanted to be a teacher to try and be an influence that he didn’t receive himself as a grade school student.

“I had a lot of not-so-great teachers that I don’t feel pushed me, and you want to be that change,” Sheffield said.

Sheffield knew he could change a students’ future by simply pushing them to be their best.

“Seeing so many people that basically whose lives, to our standards, are just terrible and flat out suck, to be blunt about it [affected me],” said Sheffield. “I want to be a kind of a rock in their life. To promote and provide that stability for these kids. If they don’t have a good role model or model or figure to look up to, they can go down a wrong road unfortunately, so I want to be that person that’s kind of like a shining light.”

Sheffield said he originally wanted to teach an older age group. Instead, he learned something new about himself. Sheffield found another home among his first-grade class as a student-teacher at Greensferry Elementary in Post Falls, Idaho.

This lack of filter is actually a bonus for Sheffield. He’s equated his appreciation for animals to teaching, as he can understand his students and his animals in similar ways.

“I’ve read some actual research that says animals and children have the same mentality,” said Sheffield. “People that like one really like the other. They both have that no-nonsense [aspect] to them. Kids don’t lie to you, they’re very blunt. It’s the same with animals.”

Sheffield knew he could use his practical knowledge of animals well in an educational setting, so he is searching for extra licenses and certifications in order to bring in his critters for his students. He believes having in-class pets teaches care, responsibility and appreciation.

However, in these changing times, that’s not as easy as it used to be.

“There’s so many restrictions to get animals into your classroom,” said Sheffield. “I would love to have them in the classroom, but it’s about finding a school that’s open to it.”

For Sheffield, it’s about his students’ connections.

“Most kids can easily connect to an animal where they might not connect to a human, especially if they have any kind of emotional or social or any other kind of learning disability,” said Sheffield.

Due to COVID-19, Sheffield is unsure of where exactly he is going to teach. Despite this, he will not stop his search for teaching positions in the more certain future. He has already applied for positions in Spokane and near Post Falls, Idaho, where he conducted his student teachings.

“I’m looking at this as just a stepping stone,” said Sheffield. “There are bigger and better things for me [out there].”