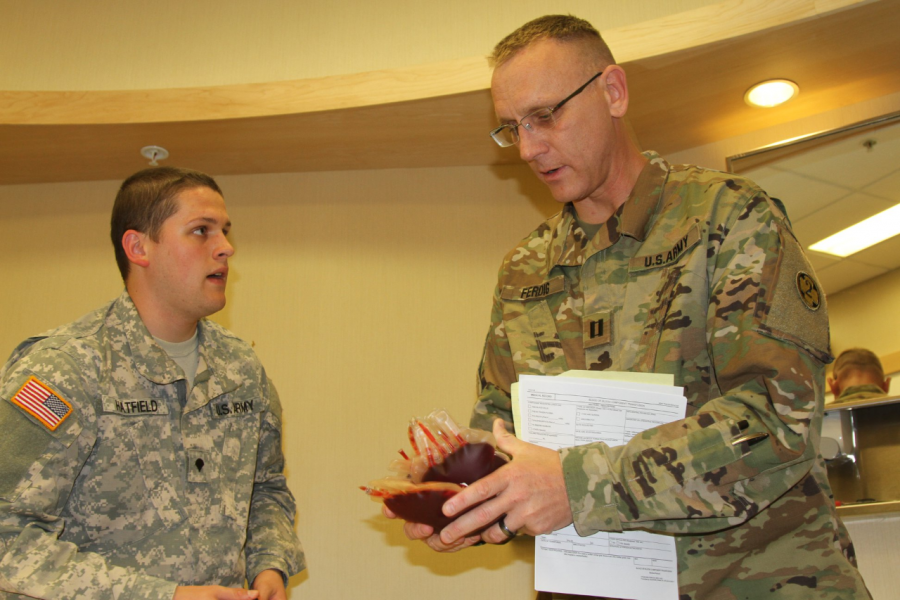 Like many other young men and women, Samual Hatfield found himself adrift after high school. He was unsure of what he wanted to accomplish in life and uncertain that he had the skills to accomplish anything anyway.

So Hatfield, born and raised in Spokane, did what many other confused young men and women do: He enlisted in the Army.

“I joined the Army Reserves because I had terrible grades and a terrible work ethic and no idea what to do with my life,” said Hatfield.

Hatfield started his journey toward becoming a medical laboratory technician at Fort Sill, Oklahoma, then moved to Fort Sam Houston outside of San Antonio, and finally to Joint Base Lewis-McChord, Washington, for the final phase of training. During the final phase of this long journey—6 months of resident work in a functioning medical lab—Hatfield discovered a direction for his life.

“While I was at JBLM I got exposure to science and that was when I decided what I wanted to do,” said Hatfield. “It was really my time in the Army that set me on the path I’m on now.”

Now the words “unsure,” and “uncertain,” no longer serve to describe him. Instead, Hatfield’s professors and peers use words like “driven,” “focused,” “disciplined” and “passionate,” as he completes his degree in biology with a biotech option.

“Samual ranks among the most driven students I have ever worked with,” said Dr. Jason Ashley, professor of biology and one of Hatfield’s mentors. “He has a genuine passion for science.”

That drive and passion has pushed Hatfield to accomplish more than just finishing a challenging degree program during his time at EWU. He is a finalist for EWU’s 40k Start-up Challenge, a program designed to give EWU students the chance to win money toward starting a business, or in Hatfield’s case, continuing his research into acne therapies.

Hatfield’s idea, to isolate the protein from a virus that attacks the bacteria that causes acne and turn it into adaption-resistant acne medication, was borne from his passion for science and his innate curiosity.

“Sam probably has the most inquisitive mind that I have encountered in a student during my 12 years at EWU,” said Dr. Luis Matos, one of Hatfield’s biology professors, and his academic adviser. “Sam regularly asks questions that I don’t know the answer to or that nobody knows the answer to because the research hasn’t been done yet.”

“I like figuring out how things work,” said Hatfield, “and it just really intrigues me, how the body works … the mechanics of how we are.”

Curiosity alone wouldn’t be enough to take on such a rigorous course of study, and Matos lauded Hatfield’s work ethic, despite Hatfield’s confession that it had once been terrible.

“He always wants to know more, and he is willing to work for the knowledge,” said Matos. “Mix that with his inherent intellectual abilities, and you have quite a recipe for success.”

Hatfield’s hard work is noted by other students as well.

“Samual is a very disciplined individual,” said friend and classmate Korbyn Edmondson. “He has lofty goals and knows he will not achieve them sitting on the sidelines. Samual rarely wastes a waking moment; he’s always doing something productive.”

Hatfield isn’t just focused on his personal ambitions. As president of EWU’s Pre-Med/Pre-Dental Society, he has taken on the challenge of helping other students prepare for medical or dental school. Hatfield has been interviewed by 11 medical schools, although he plans to work in the biotech field for a few years before deciding on medical school.

“Samual is generous, especially with his time and especially with other students,” said Dr. Joanna Joyner-Matos, a biology professor and adviser for the Pre-Med/Pre-Dental Society. “He is one of the most effective peer mentors that I have seen.”

Joyner-Matos said Hatfield has helped organize networking events and that he regularly helps younger students through the testing and admissions process because he truly cares about their success. She applauded the fact that Hatfield never takes a “least-necessary” approach and is always willing to help.

“Sam seems to consider this university to be his community, so when something needs to be done or someone needs help, he stands up,” said Joyner-Matos. “If he was faculty, we’d call this ‘being collegial’ and ‘being a good department citizen.’ I rarely apply those terms to an undergraduate student.”

Edmondson, also the vice president of the Pre-Med/Pre-Dental Society, has been impressed by Hatfield’s selflessness.

“Samual is a servant leader,” said Edmondson. “He is amazingly selfless and for that, I greatly appreciate and respect him, not only as a friend but a mentor as well.”

Hatfield’s life isn’t all about goals and ambition, though. His wife, Rochelle, also in her final year at EWU, and 4-year-old daughter, Lyla, take priority in the evenings.

“It’s been challenging, but I try and make sure that from outside of 9 o’clock to 4 o’clock, I’m focused on Lyla. On family,” said Hatfield.

Whether he decides to attend medical school in the future or pursue a career in biotech, Hatfield’s supporters at EWU believe big things are in store for him.

“He is probably in the top 5, not top 5%, but top 5 students that I have had the pleasure of teaching at EWU in the last 12 years,” said Matos.

“Samual brings an uncommon level of organization and professionalism to his work,” said Ashley. “I believe his passion will carry him through.”

“He’s always engaged. He clearly is having fun while learning and his enthusiasm is contagious,” said Joyner-Matos.