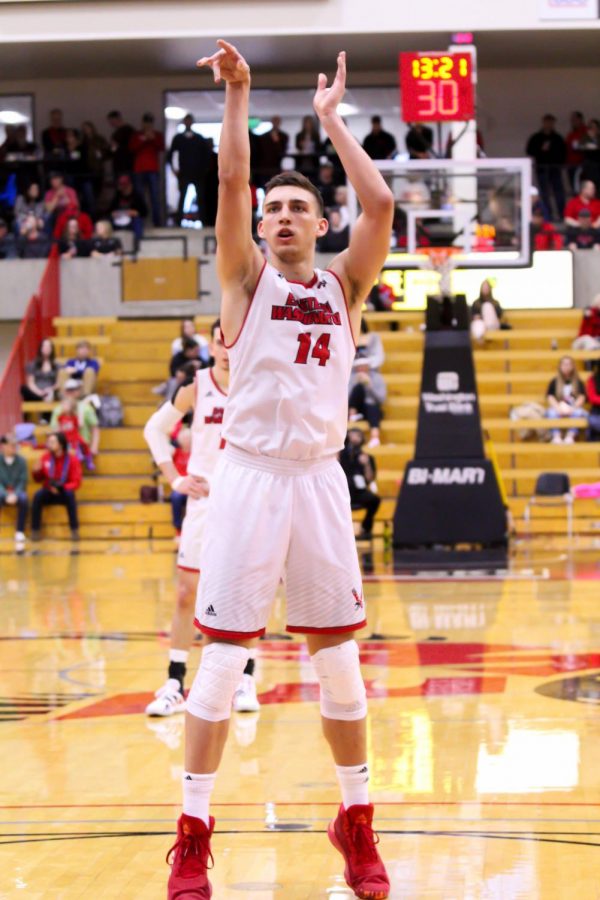 Mason Peatling has always had something to prove. Growing up playing basketball in Australia, he was never the first guy picked for an All-Star game or state team.

But by the time he reached his senior year playing at EWU at the age of 23, he was the Most Valuable Player in the Big Sky Conference.

“He always had a chip on his shoulder that he should be that good,” EWU head coach Shantay Legans said.

A 6-foot-9 inch forward, Peatling bears a wide smile and speaks in a deep Melbourne accent. In Australia, he contributed to a suburban representative team, the Dandenong Rangers, and Peatling would try out regularly for the Victoria Navy U20 men’s team, a state team.

“I was never the best player growing up by any means,” Peatling said. “I always worked really hard, but success wasn’t something I experienced immediately.”

Eventually, after Peatling kept improving — and grew 7 inches — he earned a spot as an injury replacement on the state team. That same day, he began to get some American attention from one school: EWU.

Peatling, by this time 19, wasn’t immediately sold on the idea of coming to the States. He said he thought a lot about the decision to move him and his wife, Laura, from the place they’d grown up and where family and friends were. (Mason and Laura Peatling were married in February 2016). Eventually, the opportunity seemed too good to pass up, so in 2016 the Peatlings packed their bags and spent the next four years of their life in Cheney.

After his first two seasons at EWU, Peatling was expected by the coaching staff to take the next step in his junior year toward becoming one of the team’s best players. He took that step, but it was later than expected. Offseason foot surgery limited Peatling’s ability to train before the season and caused him to miss the first 10 games of his junior campaign.

While the 12 missed weeks were difficult for Peatling, he knew that when he returned, he was going to be back for good.

“As an athlete, I have the mindset that when I’m back, I’m back,” Peatling said. “It’s going to take a different injury to pull me out.”

Peatling’s foot injury not only impacted his ability to start the season strong, but also affected redshirt freshman teammate Casson Rouse’s first impression of him.

“That spring and summer, he didn’t really play that much, so I was like, ‘this is the guy you say is so good?’” Rouse said with a light laugh. “‘This is the guy who you say is going to be our guy?’ (But) obviously once he got healthy, he changed my thoughts quickly.”

Rouse and Peatling went on to become close teammates and friends, often working out together before and after practices.

When Peatling came back in his junior year, EWU went 15-9. Then, according to Peatling, last offseason he exploded.

“It was the first offseason where I actually got better instead of recovering from an injury,” Peatling said. “I had so much confidence after that. I really started playing my best basketball after that period.”

Peatling attacked his senior season with a vengeance. On Dec. 13, 2019, he set a school and conference record with 54 points in EWU’s win over Multnomah University. He racked up double-double after double-double, averaging 18.5 points and 10.4 rebounds per game while leading EWU to a 23-8 record and a Big Sky regular season championship.

When the regular season ended, Peatling was named the conference’s Most Valuable Player by its 11 coaches.

Legans expected a lot from Peatling when he came to Cheney, but did he expect him to become league MVP?

Peatling’s game isn’t flashy. Despite his height, he rarely dunks or makes plays that end up on SportsCenter. Players like that don’t often win MVP nowadays, but Legans said the Big Sky coaches recognized Peatling’s value.

“Coaches would love to have a guy like Mason on their team,” Legans said. “He played night in and night out, never took plays off, took charges, made big shots (and) was the first guy to give his teammates love.”

Peatling and EWU had aspirations to make the NCAA Tournament for the third time in school history. Most sports fans know what happened next: COVID-19 forced the cancelation of most athletic events, including March Madness.

Nonetheless, Peatling wrapped up his shortened season with a sense of accomplishment.

“Mason is really mature,” Legans said. “He understood what was going on with the health implications and the virus. Obviously disappointment set in, but I think there was a lot of relief … he got to cut the nets down the last game of his career, at home, in front of his family and friends on Senior Day. In some ways, that’s like a storybook ending.”

Peatling’s maturity extends off the court, as he’s set to graduate with his master’s degree in business administration. He has a 3.97 GPA. Legans said Peatling is usually the smartest guy in the room, but one would never know it.

“Sometimes you can be around people that are that (smart) and they’ll let you know,” Legans said. “(But) Mason was just one of the guys.”

Rouse said Peatling is more than a teammate; he’s a role model and friend.

“He’s always at the house doing school stuff,” Rouse said. “He’s kinda nerdy. But that’s good for me, because being around someone like that who is always making the right decision is someone I can look up to … as good of a teammate he is, he’s just as good of a friend.”

Peatling spent much of his down time in Cheney with his wife. Their favorite spots in town were Starbucks and The Mason Jar. When asked if he requested that The Mason Jar name a drink in honor of him winning MVP, Mason Peatling broke into a wide grin.

“No, because they already named the whole place after me.”