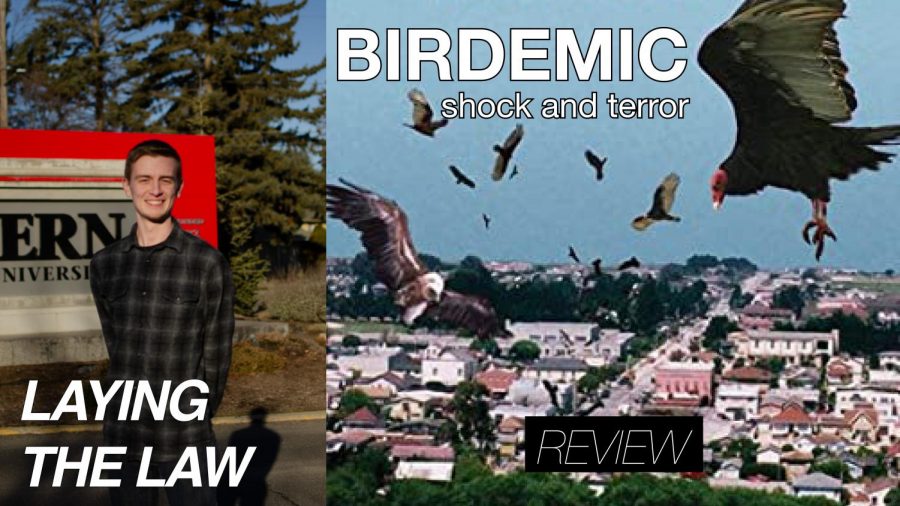 This is part six of a nine-part entertainment review series by The Easterner. Drew Lawson, author of this article, is the sports editor for The Easterner. His opinions expressed in this article do not necessarily reflect the views of The Easterner, its staff or Eastern Washington University.

Today I would like to talk to you about what is undeniably the worst movie ever put to screen. It is called “Birdemic,” and it will make you want to claw your eyes out with a coat hanger.

Set in the town of Half Moon Bay, California, “Birdemic” follows the insufferable tale of Rod (Alan Bagh), a software salesman who casually drives to work at a painfully slow pace. Why throw that detail in, you may wonder? Well, because the film opens with Rod doing just that…for five full minutes. The music loops, the credits (including “Supporting Casts”) roll and you wish you were anywhere else.

It’s even worse when you learn that director James Nguyen couldn’t afford a real crew, so all the names (aside from actors) in the opening credits are literally made up.

After the robot-like Rod successfully parks his car, you wonder if the tragic introduction was just an anomaly. The first round of dialogue proves you horribly wrong. Just listen:

After Rod begins to eat at the diner he’s just arrived at, he notices a young woman (Whitney Moore) awkwardly eating food. After staring at her  for a very long time as she leaves the eatery, he rushes after her. We find out that she’s a fashion model named Nathalie, and that Rod sat two rows behind her in English class in high school.

Rod and Nathalie agree to “keep in contact,” because their chemistry is just so palpable. In the meantime, Rod continues work as a salesman at NCT Software, while Nathalie tries to pursue a modeling career. Amazingly, they both find great success. Nathalie goes from working at a 24-hour photo joint to being offered the cover role on the next Victoria’s Secret magazine, all in the course of an afternoon. That same day, Rod makes the biggest sale of his career, “catching the big fish,” at $1 million. Interestingly, during the course of the sale, he offers the customer a 50% discount, revealing that he did in fact lose NCT Software $1 million. However, his sale is still regarded as heroic.

The movie continues to track Rod and Nathalie’s relationship for 45 minutes and introduces many meaningless characters, such as Nathalie’s retired mom (who is really loving the retirement and loves to support Nathalie in her modeling career, even though she’d prefer she became a real estate agent), Rod’s coworker Rick and Nathalie’s best friend Mai. Rod and Nathalie eventually dance in a club to a song by Damien Carter (they show the whole song in the movie, by the way), and then make their way back to a dinky motel room that is clearly way under Rod’s price range.

Why should Rod be able to afford a better motel room? Well, because his company NCT Software is bought out by Oracle Corporation for $1 billion. Rod takes his stock option, invents new affordable solar green tech and sells his tech for $10 million and retires, all within about three days of each other.

The next morning, the birdemic begins. Countless eagles, vultures and seagulls begin to attack Half Moon Bay. Armed with coat hangers, Rod, Nathalie and a couple they meet, named Ramsey and Becky, try to fend off the birds. This results. (Why the birds make noises similar to World War II-era dive bomb planes, I have no idea.)

Half Moon Bay is now in an apocalyptic state. Well, it is for the actors. Everyone else in the background, including cars driving, seem to be just fine.

The carnage causes many strange events. The four new friends pick up two children whose parents were murdered by the birds. One of the children was locked in the trunk of a car, and the other was under the car. Rod lures her out, telling her not to be afraid even though he’s pointing a gun at her.

Sadly, Ramsey and Becky soon die. Actually, who cares. Rod and Nathalie are left to take care of these two children, Tony and Susan, by themselves while fighting off atrociously-CGI’d birds.

As Rod, Nathalie, Tony and Susan fight their way through the birdemic, they meet many “important” characters that are never heard from again. One is a gas station clerk who tries to sell gas for $100 a gallon, due to the birds attacking. “What? $100? That’s outrageous!” exclaims Rod, who sold his revolutionary green tech for $10 million just the day before.

Down the road, Rod is held up by a man wearing a cowboy hat and wielding a gun, who threatens Rod with these fear-inducing words: “You’re gonna sell me some gas.” As in:  you will take my currency in exchange for gas, or I will kill you. Luckily, a bird slits this man’s throat, and Rod drives off…without the gas.

Throughout the movie, it is hinted that the birds are attacking due to global warming. The global warming apparently ends, however, because after Rod runs out of gas, finds a fishing rod and stove in his van, catches a fish, boils it whole and then the birds attack again, suddenly the birds just leave and the credits roll.

Birdemic was named one of IMDB’s worst movies ever made, and it’s certainly the worst movie I’ve ever seen. Bagh’s performance is robotic (albeit extremely quotable), none of the characters matter, the cinematography is painful (most shots are held for five seconds after a scene is effectively over) and the lines make next to no sense.

(My personal favorite line is when Rick asks Rod if he’s going to try and impress Nathalie with a nice hot Ferrari. Rod responds, “she’s my hot Ferrari.”)

The one redeeming quality of the movie is that Bagh appears to be a pretty nice guy in real life. I know this, because my friend sent him a video on Instagram at another friend’s birthday party this year of that friend dancing and saying “I love you, Alan Bagh.” Bagh responded and promised to use my friend’s dance moves in Birdemic 3. (Yes, there’s a Birdemic 2, but I’m not touching that.)

You think I made all of this up. I did not.

That interaction with Bagh actually happened.

Despite the shock and terror of “Birdemic,” I’ve seen it multiple times in an attempt to torture all my friends, and you can too on Amazon Prime. Overall rating: 0.1/10 stars.