EWU coaches adjust to pandemic-style recruiting: Part one of a three-part series 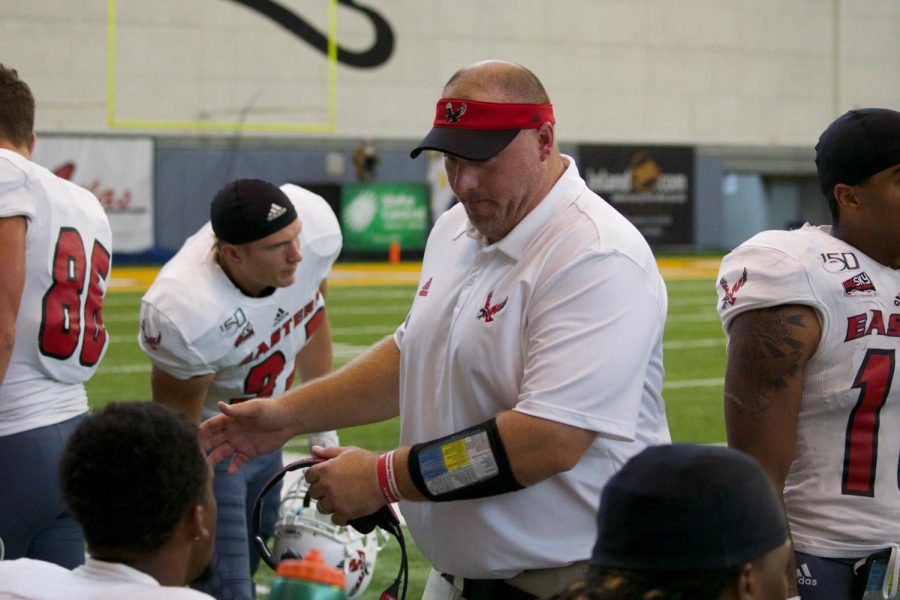 Drew Lawson for The Easterner

EWU head coach Aaron Best coaches his players during the Eagles' 35-27 loss at Idaho on Sept. 21.

EWU coaches hoping to lure top-notch athletes to play in Cheney have had to get used to a lot of FaceTime calls and virtual campus tours while on the recruitment path.

That’s just one of the adjustments EWU recruiters have had to make amidst the COVID-19 pandemic, which has forced the cancelation of many regular recruitment activities.

The Easterner spoke to coaches in football, men’s basketball and women’s basketball to find out how those staffs have handled this unusual recruitment situation. This story will be released in three parts. This is part one, which covers the football team with insight from Marc Anderson, the team’s director of football operations/recruiting coordinator.

The largest cancelations concerning recruiting are the inability to host players for on-campus tours or pay visits to those recruits at their homes. The NCAA extended its recruiting Dead Period until at least May 31, an annual period when coaches are not allowed to have face-to-face contact with recruits or their families. Virtual recruiting is not taboo, however.

“Normally, we would be done with spring ball and our coaches would be out on the road right now … hitting the ole’ recruiting trail,” Anderson said. “Like a lot of things in the country, a lot of that has gone virtual.”

EWU was forced to cancel most of spring football, including the annual Red-White scrimmage in April. Coaches are now reaching out to high school coaches and potential athletes digitally.

EWU has largely solidified its roster for the 2020 season. Now, the team is trying to find players from the 2021 class.

“It’s some more FaceTime, a little bit of that stuff to shake the monotony of phone calls,” Anderson said.

EWU coaches are also giving virtual tours via FaceTime, where the recruit gets to see the campus from their quarantined location. Anderson said the goal is to form deeper relationships with prospective athletes, despite the illegality of in-person contact.

Anderson said spring ball is usually a time for recruits to have on-campus visits and stay in Cheney for a weekend, but he doesn’t think that’s a negative effect in the sense that other teams are going through the same challenge. However, EWU was also forced to cancel its summer camps for high schoolers, which Anderson said is an important time for getting prospective athletes involved with the team.

“Our coaches are seeing these guys in person and getting them on campus, eating in the dining hall, (staying) in the dorms,” Anderson said. “I think (COVID-19) has affected (recruiting) a little bit that way.”

Current EWU players are not allowed to get involved in recruiting per direction of the coaching staff, an NCAA rule that exists even outside of the Dead Period.

The likelihood of the 2020 college football season occurring or being adjusted is still up in the air. Uncertainty surrounds sports in general, especially football. Reports recently surfaced that the NFL is looking at options for delaying the start of its season and/or playing its games without fans. It’s currently unknown what steps the NCAA will take for its football season, but the possibility of the season being delayed, canceled or played without fans in the stands is present.

Anderson said the coaching staff hasn’t changed its message to recruits or current players in lieu of this uncertainty, as decisions from the NCAA have yet to be made.

“It’s far enough (away) that we’re focused on the here and now,” Anderson said.