How to help a friend through trauma

Star Dragon is The Easterner’s news reporter. Her opinions expressed do not necessarily reflect the views and opinions of The Easterner, its staff or Eastern Washington University.

It’s widely known that sexual assault is a prevalent crime across college campuses. In my own experience as a college student, the majority of people I have met have either experienced sexual violence firsthand or know someone who has.

Fortunately there is a plethora of help guides available for victims. However, there are very few resources for the victim’s family and friends to follow. If you are a friend or loved one of someone who has been through trauma, such as sexual assault, you may find yourself wanting to help but not know how.

“Sexual assault is any type of sexual activity or contact that you do not consent to,” according to womenshealth. gov.

Sexual violence is not as black and white as it may seem. For one, rape can happen to anyone, regardless of gender.

“For years, the FBI definition of rape was gendered,”said the Atlantic. Common misconceptions like this attribute to victims’ shame. You may know someone who has been through an assault that does not fit the expectation of what you or they thought an assault would be. This does not discount their experience.

Everyone has a right to consent. Many victims blame themselves for the trauma that they have been through and do not accept that what happened to them was not their fault. Most victims know the perpetrator of the crime and feel shame, denial or shock. It can be incredibly hard for victims to accept what has happened to them.
“8 out of 10 rapes are committed by someone known to the victim.” -Rainn.org
It is common for victims who have suffered abuse to deny that the perpetrator of the crime knew what they were doing was wrong. “Perpetrators of rape are often serial criminals” according to Rainn.org.

If your friend has told you about having non consensual sexual activity with their partner inform them that it should not be tolerated. It is also important to know that just because you or a friend is in a relationship with someone, that does not give them the right to their partner’s body. Inform your friends that consent is mutual.

The website Femstella featured an article where five women wrote about being raped by their boyfriends.

Coline-Hay wrote, “I loved this boy. He had promised to marry me and he had never hurt me before … Shawn (the boyfriend) and I stayed together for six more months after the initial assault. I dismissed the rape as a miscommunication and assured Shawn that he hadn’t done anything wrong. I made excuses for what had happened. I didn’t fight back, I didn’t scream no, I didn’t try to get away. I felt as if I called what happened rape then it would be an insult to everyone who had been really raped. I convinced myself that this was my fault and I needed to accept it.”

It is important to understand this so if a friend or loved one tells you about a similar event, you can let them know that what their partner did was not okay. It can be hard for victims to accept that someone they love would do something so horrific to them.

What can you specifically do to be there for a friend in need?

Tell them what happened was not their fault. As stated earlier, many victims feel ashamed for what has happened to them. Many victims refer back to people saying statements such as, “she asked for it.” 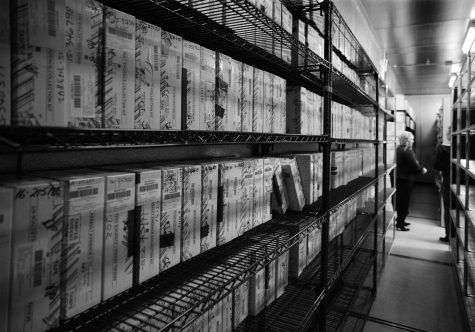 Hundreds of untested sexual assault kits wait to be tested at Seattle’s Police Department. Washington currently had 6,000 untested kits in October of 2017 | Photo courtesy of the Seattle Times

Growing up as a woman, when a boy would pull on my hair or make fun of me, I was told by adults surrounding me that, “it means he likes you.” This insinuates that being treated badly by men was normal and should merely be taken as a compliment. I know that I am not the only one who has grown up with these experiences. It has shaped many people’s view of what is acceptable. This behavior is attributing to the U.S’s rape culture.

“Rape Culture is an environment in which rape is prevalent and in which sexual violence against women is normalized and excused in the media and popular culture,” according to Marshall University’s Women’s Center.

Do not force a friend to talk about their experience. Talking about a traumatic experience can be very difficult for a victim and make them feel as if they are reliving the event. It is crucial to be patient with your friend and be ready to be a lending ear.

Let your friend know what resources they have available. This may include CAPS, Title IX or the Cheney/ Spokane Police. If they decide that they would like to talk to one of these resources or report an incident, offering to go alongside them can help your friend feel less alone. You and your friend’s relationship does not have to drastically change. Continue regular activities with them. Live life the way it was before. This can remind them that not everything is different. Having a night in watching a movie or playing video games can be a healing experience for your friend.

If you can’t be with your friend in person, sending a quick text or phone call reminding them that you are there for them and still love them can make a big impact.

Some assault victims experience PTSD after going through trauma. This may make them seem jumpy or anxious even when they’re doing normal activities.
“PTSD is just one example of the lasting impact of rape. If left undiagnosed and untreated, this mental health condition is life threatening.” – Shanon Lee, a Guest Writer for wearyourvoicemag.com.
You may want to ask your friend directly how you can help. No one’s assault story is the same, so what works for one person may not for another. “If a friend with PTSD cancels on you or seems uncomfortable with typical activities you’ve done in the past, like going to the mall, don’t take it personally.” Said Janina Scarlet, a clinical psychologist interviewed by U.S.News. Instead, ask if they’re doing OK and consider different arrangements, such as spending time together in smaller groups or simply one on one.”

All of this information may seem overwhelming. If you are the friend of someone who has been through trauma, there is nothing wrong with asking a trusted adult on how they would help a friend, as long as you keep your friend’s identity private if they do not want their experience shared with others.

If your friend is a victim to sexual assault, things may seem bleak, but not all hope is lost. PTSD is something victims can heal from and being there for your friend can help them more than you may be aware of. Remind your friend that they are still who they were before.
“Our traumatic experiences don’t define who we are. We get to decide the rest of our journey after experiencing trauma,” Janina Scarlet, Child Psychologist