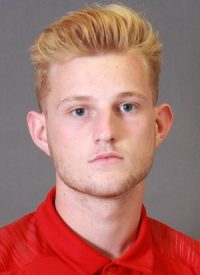 According to court records acquired by The Easterner, Durr has been charged with four counts of identity theft, one count of making a false statement and one count of other theft.

Officer Cheyanne Aiken of the EWU Police Department responded to a report on Feb. 25 from EWU student Solae Swenson, a resident in snyamncut, court records said. Swenson reported her wallet had been stolen from her dorm room.

Upon arriving at the scene, EWU Police found Swenson with Durr and freshman defensive back Jordan White. Durr and White told police they had seen a female enter Swenson’s room and flee the scene. Swenson reported several items had been stolen, including a wallet, debit card, $200, a Montana driver’s license and two gift cards. Swenson had frozen her bank account and was notified that someone had used her debit card to make multiple transactions through PayPal and CashApp but was denied.

The next day, Feb. 26, EWU police detective Robert Schmitter contacted Aiken and informed her that three EWU students wanted to make a statement saying they knew who was responsible for the items stolen from Swenson’s room.

The students were all members of the EWU soccer team. All three told police that Durr and White committed the theft of Swenson’s wallet.

Durr confessed to stealing the wallet and attempting to transfer funds via CashApp to himself, and also confessed to giving a deceitful description of the suspect, according to court records. The other football player, meanwhile, denied any involvement in the crimes.

According to court records, on March 2, freshman offensive lineman Nathan Hagreen told police that Durr made an unauthorized PayPal transaction on Hagreen’s account that day. Hagreen provided a cell phone screenshot of Durr verifying to a fellow teammate via Snapchat his PayPal username. Hagreen also provided a written statement and bank transaction records.

On March 3, Durr admitted to discovering Hagreen’s wallet in the EWU locker room earlier this year and taking a picture of Hagreen’s debit card to use on PayPal. Durr also said he made purchases on the app “Clash of Clans” and possibly mistakenly used Hagreen’s card because it was stored on his PayPal account.

Durr was then arrested and transported to Spokane County Jail. He was released on March 6.

Durr and White have subsequently been removed from the football team, according to athletic director Lynn Hickey. The players will also go through an academic disciplinary process.

This is a developing story. The Easterner will provide more information when made available.