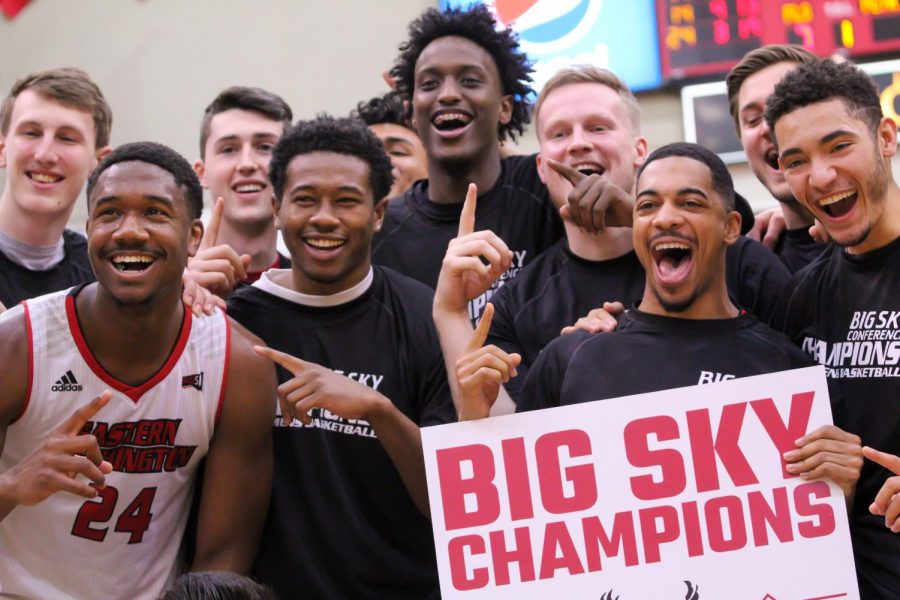 “It feels like we accomplished a really tough goal,” EWU head coach Shantay Legans said. “We’re going to celebrate … you have to enjoy your wins. You never know when you’re going to get this again. I hope everybody gets to enjoy this tonight. It’s a great accomplishment for our university.”

EWU endured a sloppy first ten minutes of the game, shooting 27% and committing six turnovers. Davison carried much of the scoring load, shooting 6-8 to start the game and getting easy baskets on back cuts to the hoop.

“I knew how important this (game) was, and I wasn’t going to let it slip away,” Davison said after the game.

EWU managed to take a 40-35 lead into halftime behind hot three-point shooting, hitting seven shots from distance in the initial period.

Peatling said EWU played well defensively in the first half, but had too many turnovers.

“We just tried to take it one possession at a time and play the right way,” Peatling said. “The result will take care of itself.”

After the break, EWU built a lead as big as 11, fueled by steadier offensive play and an ability to always make a push when WSU attempted to come back. When the final buzzer sounded, the celebration was on.

“I’m so happy right now,” Davison said after the game. “I can’t even think right now.”

EWU will celebrate its regular season success for a short while, but its biggest goal has yet to be achieved: making the NCAA Tournament. EWU needs to win next week’s Big Sky Conference Tournament to advance to the Big Dance. The Eagles are the No. 1 seed by virtue of its regular season title and will play the winner of the undetermined 8/9 matchup.

Aiken said the team can’t get complacent or satisfied with its regular season success and assume that will translate to conference tourney success.

“We for sure have to take it up to another level, because every team in the conference is going to turn it up another level,” Aiken said. “Just because we won this championship (doesn’t) mean that we have to be complacent and hold off on getting better.”

Legans said EWU has to continue getting better in order to win the BSC tournament.

“The way we finished this week off, I’m feeling good about our chances,” Legans said. “The mindset is, you have to go out there and play your basketball … if I have to play guys 40 minutes, then we gotta play them 40 minutes. This is the time to go win by any means necessary.”

If EWU is unable to win the BSC tournament next week, it will still earn a bid to the NIT thanks to its outright regular season title.

EWU will start its conference tournament run in the BSC tournament quarterfinals on Thursday, March 12 at 11 a.m. PST at CenturyLink Arena in Boise, Idaho. Its opponent will be decided the day before in the first round.