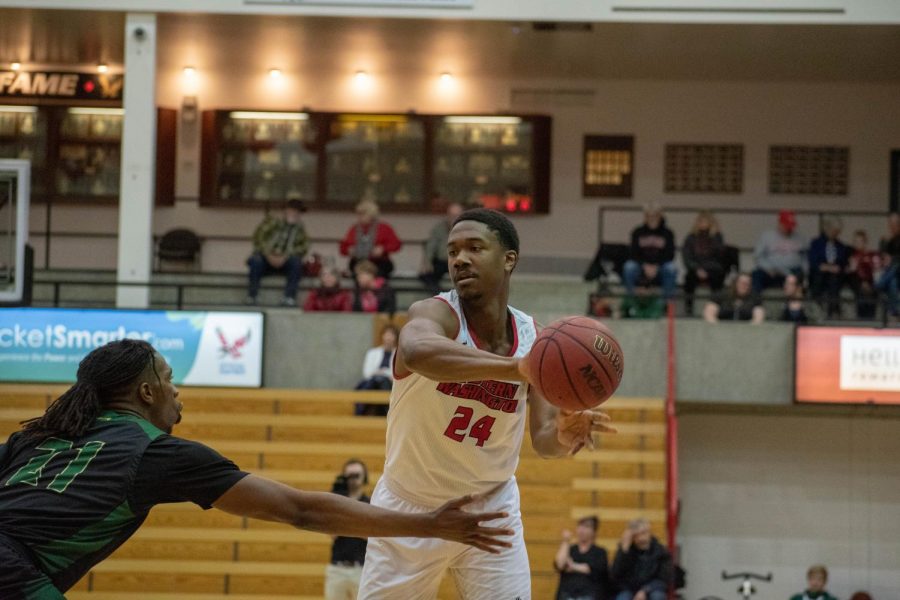 Lauren Reichenbach for The Easterner

When the EWU men’s basketball team (11-4, 18-8) built a 17-point first half lead against the Sacramento State Hornets (6-10, 13-12) Thursday, it appeared the Eagles might get a blowout home win for just the second time in Big Sky Conference play this season. Instead, EWU was forced to grind out another nail-biter, winning 77-76.

“In a game tonight where we came out sound defensively … we had one of our worst defensive games in the second half,” EWU head coach Shantay Legans said. “But at the same time, our guys made the winning plays when we needed them. That’s the sign of … guys getting better.”

EWU took a 39-26 lead into halftime, but Sac State came out firing in the second half. At one point, the Hornets hit 10 straight shots while going on a 15-0 run and took a six point lead with 7:39 left.

Meanwhile, Peatling was his usual steady self all game. His three-pointer with 2:00 left gave EWU a 75-71 lead. Peatling finished with 28 points and 16 rebounds.

Peatling said the key to swinging the momentum back in EWU’s favor after Sac State’s 15-0 run was more defensive activity and limited turnovers. Peatling pointed out that EWU is usually the team facing a large deficit trying to make a comeback, but that script was flipped tonight.

“We’d rather be in that position than the other, but we’re still not really happy with our performance 100%,” Peatling said. “We’re going to go back to the drawing board and see how we could’ve pulled away instead of making it a game.”

Aiken ended up shooting 4-6 from the three-point line after hitting three second-half threes in EWU’s previous win against Portland State. Aiken had been in a bit of a shooting funk previously, but Legans said the team hopes tonight’s performance shows that Aiken’s shot is back.

Legans also said Aiken was able to get in a groove because Sac State was double-teaming Peatling and wings were cutting hard to the basket, allowing Aiken to rotate into open three-pointers he could take in rhythm.

“Mason found some great looks and we had some great cutters,” Legans said. “Kim stepped up and made some shots.”

Sac State was led by guard Izayah Mauriohooho-Le’afa, who had 23 points on 9-13 shooting. Center Joshua Patton added 18 points for Sac State, which had four players in double figures.

With the win, EWU trimmed its magic number for clinching a top-five seed in the BSC Tournament next month to three. EWU remains in a tie for second place in the BSC after Northern Colorado knocked off Southern Utah 68-66 Thursday.

EWU has five games remaining in the regular season. Next up is a home tilt with the Northern Arizona Lumberjacks on Saturday, Feb. 22 at 2:05 p.m. at Reese Court.