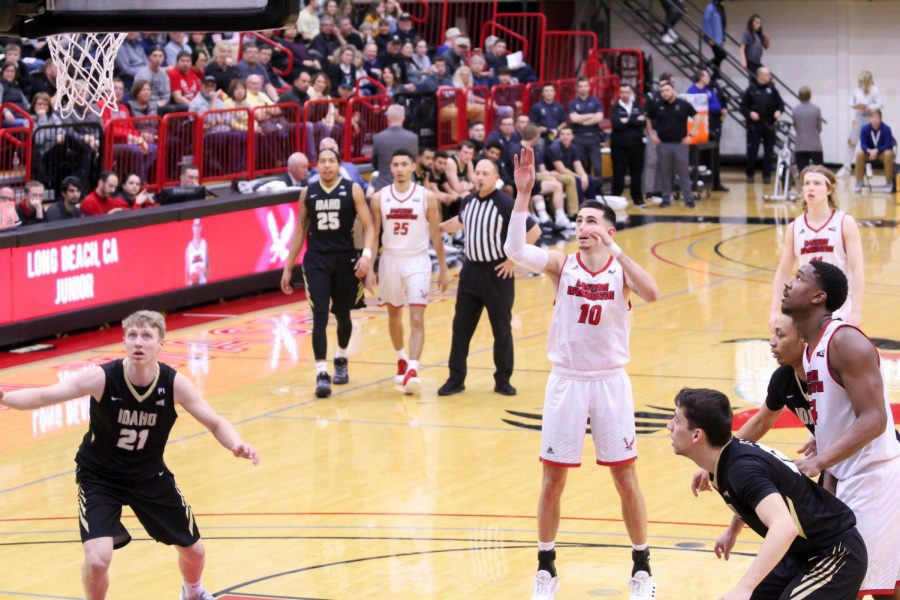 EWU junior guard Jacob Davison attempts a free throw that would give him 1,000 points for his career. Davison scored 21 points in EWU's 74-71 loss to Idaho Thursday.

EWU (9-4, 16-8) has faced double-digit deficits in five of its six Big Sky Conference home games. EWU came back to win three times previously, but Thursday the Eagles dug a 24-point hole against the Idaho Vandals (3-10, 7-17) that proved to be too much to overcome. UI, which is in last place in the Big Sky Conference, came into Reese Court and knocked off EWU 74-71.

EWU head coach Shantay Legans harped on EWU’s poor rebounding effort after the game. EWU, normally strong on the glass, was out-boarded 46-28 and gave up 11 offensive rebounds while securing just four on its own end.

“They beat you by 18 on the glass, you’re not going to win many games.” Legans said. “When the ball goes up you have to go get it.”

Chilly three-point shooting and sloppy offense also hurt EWU. The Eagles were 8-32 from distance and committed 17 turnovers. EWU managed to force 23 UI turnovers, but were outscored in the paint 36-22.

Legans wasn’t pleased with the attitude of his team, saying the EWU players expected the game to be an obvious win.

“He was getting shots,” Legans said of Allen, the BSC’s second-leading scorer. “We talked about trying to get the ball out of his hands … (but) early in the game we gave him a lot of those easy shots … when you let scorers get going early, it’s hard to really stop them.”

EWU trailed by 18 at halftime and by as many as 24 early in the second half. The Eagles made things interesting, cutting the deficit to three in the final minute after a Jacob Davison steal and layup, but EWU missed three straight chances to draw closer as time wound down.

UI escaped with a win despite missing six free throws in the final minute after Kim Aiken Jr’s desperation three from near midcourt wasn’t close. Aiken was 2-13 from deep.

Davison scored 21 points, which tied Mason Peatling for the team high. Davison’s 13th point gave him 1,000 for his EWU career.

With the loss, EWU fell into a tie for second place in the BSC with Northern Colorado. EWU is now a full game behind Montana in the standings.

EWU will now look to rebound on the road at Portland State on Saturday, Feb. 15. PSU is tough at home, sporting victories over UM and UNC in the Rose City. Tip-off is at 7:05 p.m.