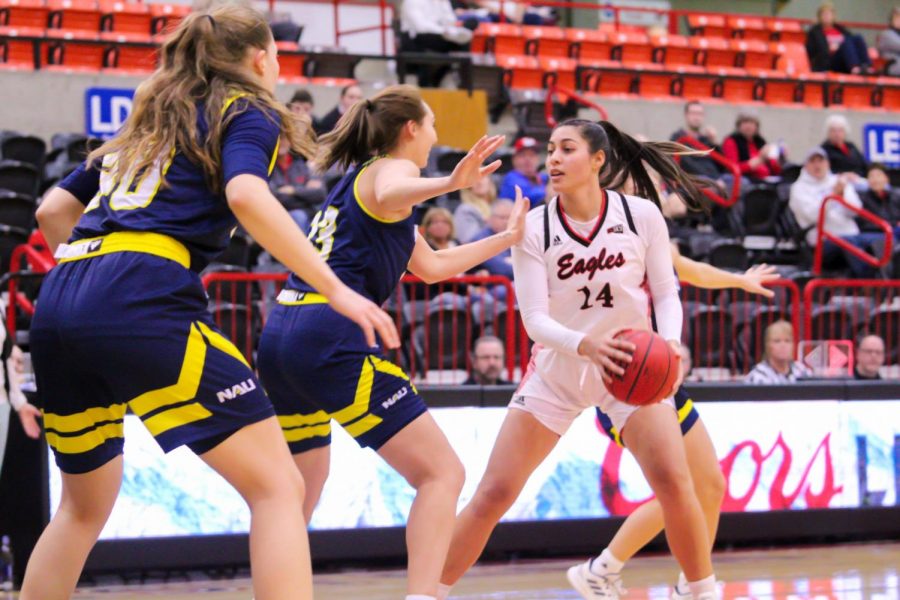 EWU sophomore center Bella Cravens looks to make a move on Feb. 3 versus NAU. Cravens had 11 points and 10 rebounds in EWU's 77-56 loss to UM Thursday.

Points off turnovers killed EWU, which trailed the entire game except for 22 seconds in the first quarter. UM outscored EWU in that category 24-4. EWU committed 16 turnovers and forced UM to turn it over just seven times. EWU was also outscored in the paint 30-20 and shot 36.5% from the field.

Guard Mckenzie Johnston was the player of the game for UM. Johnston scored 22 points while grabbing eight rebounds and dishing out nine assists.

Sophomore center Bella Cravens was one of the lone bright spots for EWU Thursday. Cravens notched a double-double with 11 points and 10 rebounds.

“We just can’t have the struggles offensively for periods of time like we did today,” Schuller’s text said.

Today’s game tipped off at 11 a.m. due to the fact that it was EWU’s annual Kids Day. Over 2,500 local elementary students packed Reese Court for the game.

“It’s a lot of fun for our players to play in that environment,” Schuller’s text said.

EWU’s next chance to stop the losing streak is Saturday at the Montana State Bobcats. Tip-off from Bozeman is scheduled for 1 p.m.