Magnuson puts in the work and dishes the rock 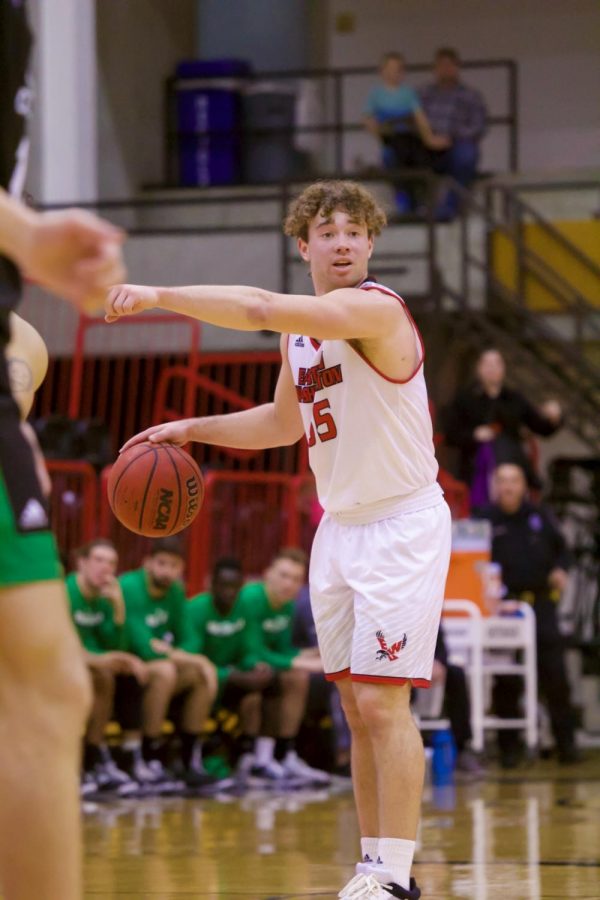 EWU point guard Ellis Magnuson moves up the court and calls out a play to his teammates. A true freshman, he takes a pick from senior Mason Peatling and dribbles to the right of the free throw line, drawing defenders to the right before whipping a pass across his body to freshman Casson Rouse, who is wide open for an easy three-point attempt from the left side.

This is a sequence that has happened more than once in Magnuson’s short EWU career. That court vision is a large reason why the Boise native leads the Big Sky Conference in assists (5.9 per game) and assist-to-turnover ratio (2.8). His eleven assists against Portland Bible College on Nov. 5 is tied with Portland State’s Holland Woods for the most in a game in the conference.

Peatling said Magnuson’s passing ability has given the offense a look it hasn’t always had in his time at EWU.

“He’s been able to get me, Kim (Aiken) and Jacob (Davison) good looks,” Peatling said. “We have multiple guys scoring in double figures. You don’t have that  if you don’t have a pass-first point guard. You can see it in the play of other players.”

EWU head coach said Shantay Legans it’s been a long time since he’s seen someone with the passing ability of Magnuson. It’s a skill that Magnuson credits in part to his work with his AAU coach growing up, Roberto Bergersen.

Bergersen said in a phone call from Boise that he encouraged Magnuson and all the players he coaches to be aggressive with their passing. It’s resulted in Magnuson making passes at the high school and college level that are above his pay grade.

“You always hear dads on the sideline saying, ‘slow it down, don’t make that pass,’” Bergersen said. “It’s just the opposite for me. We want them to be more aggressive. … Ellis, because of his innate ability, was able to pick up on some of those things early. It got to the point where by the time he was in (high school), he would make passes that he shouldn’t be trying to make, and they’d go through.”

Magnuson played for Bergersen’s Hoop Dreams from third grade through high school. Magnuson cited Bergersen as one of his biggest influences growing up.

“He’s been a great inspiration for me,” Magnuson said. “He’s always pushed me. He’s always been there for me, whether it’s basketball or not basketball-related. He’s been like a brother to me.”

Bergersen also said he’s very close with Magnuson, saying he’s like a son or little brother to him. Magnuson is close with Bergersen’s sons, and Bergersen said Magnuson is practically family.

“We’ve developed a relationship where we can kind of tell each other when we don’t like what the other is doing,” Bergersen said. “We also give each other the type of unconditional love that you would give a family member.”

While Magnuson said Bergersen and his parents were huge influences in his life, he was initially hesitant to say he had any huge inspirations, as he prefers to pave his own path.

“I feel like I want to create a name for myself,” Magnuson said. “(I’m) trying to be myself and … be an inspiration for other people.”

Magnuson played basketball and football at Borah High School in Boise. He was successful in both sports, winning the USA Today Idaho 5A Player of the Year in basketball his senior year and earning first team All-State honors as a wide receiver in football. Magnuson received walk-on offers to play football at Washington State, Boise State, Weber State and several others. However, only one school offered him a full-ride scholarship, and that was to play basketball.

“Eastern reached out to me. They were on me for a while and they finally offered me,” Magnuson said. “That was kind of a no-brainer for me at that point.”

EWU head coach Shantay Legans knew about Magnuson early in his high school career, and assistant coach Bobby Suarez was key in scouting and recruiting him.

Legans said Magnuson’s days as a football player aid him on the basketball court, giving him toughness.

Off the court, Magnuson loves the outdoors, fishing and other animals (he has a pet alligator back in Boise). However, there’s not much time off the court.

Magnuson is obsessed with basketball. Several players and staff around the team have said he practically lives in the gym.

“He loves basketball,” Legans said. “He wants to be great. When you want to be great, you always work hard.”

Legans said that hard work has earned Magnuson the respect of older players. Peatling said he feels that Magnuson’s work ethic is setting him up for a very successful college career.

“Usually when guys have work ethic, you’re not sure if it’s going to come right away or click on all cylinders,” Peatling said. “As an older player I know he’s going to be right for the long haul.”

That work ethic has always been there, according to Bergersen.

“I can remember when he was 8 years old (and) not very good at basketball,” Bergersen said. “But he was a sponge. He would just do it and do it and do it until he got it right. Then he would go home. He had a little hoop outside his house, and he would shoot there all night.”

Bergersen said in high school Magnuson would often jog or run from football practice directly to AAU practice without missing a beat. If Bergersen called for a surprise practice or workout, Magnuson was always there to be counted on.

“There’s nothing that was going to trump getting the work in,” Bergersen said.

For Magnuson, hard work is the only way to get better.

“I don’t know what other way to put it,” Magnuson said. “No matter how good you are now, if you put in the hours, you’re going to end up passing people up. You just have to work harder than everyone else.”•