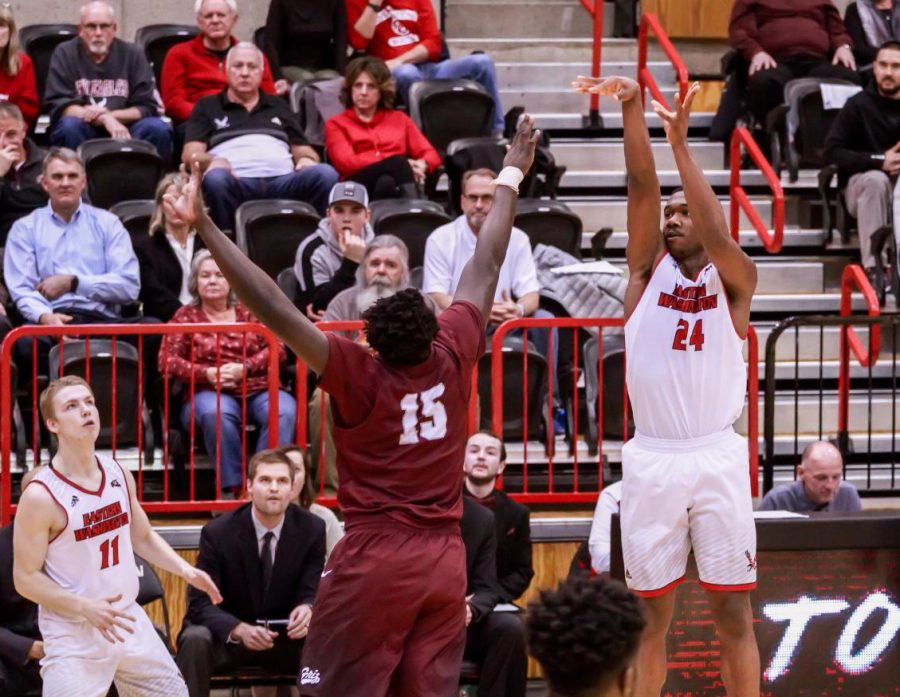 Bailey Monteith for The Easterner

EWU fans would rather forget what has happened the past two years in the Big Sky Conference Championship: a first-half lead melts away as the Eagles’ hopes of advancing to the NCAA Tournament are crushed by the rival Montana Grizzlies.

“We already have a rivalry with Montana,” EWU junior guard Jacob Davison said. “We don’t really like each other. Losing to them back-to-back years (is) in the back of your mind.”

The winner of Thursday’s game will be at least tied for first place in the BSC.

EWU has started off BSC play 2-1, and like every other Big Sky team, suffered a conference loss in the first two weeks of league play on Dec. 30 at Idaho State. EWU’s two wins came in nail-biting fashion, as the Eagles hung on to beat Weber State 79-77 on Dec. 28 and Portland State 71-69 on Jan. 4.

Sophomore guard/forward Kim Aiken Jr. leads the conference in rebounding at 11.1 per game. Aiken is the only BSC player currently averaging a double-double. The versatile wing contributes 16.4 points per game, seventh-most in the BSC.

Senior forward Mason Peatling has had a strong start to his final season at EWU, averaging 15.4 points and 7.4 rebounds per game. Peatling is 10th in the league in scoring and seventh in rebounding. The Aussie post player put up a conference and school-record 54 points on Dec. 13 in EWU’s rout over Multnomah.

Davison is tied for fourth in the BSC in scoring, pouring in 17.6 points per game. Davison also gets 1.9 steals per game, third in the league.

“We can score in many different ways,” Davison said. “When you have a great freshman point guard like Ellis, who can pass, he’s going to help out a lot against Montana’s defense.”

UM won its first three BSC games before falling on Jan. 4 at Northern Colorado. The Griz went 4-7 in nonconference play.

UM lost some firepower from last year’s championship team, but the team still provides a balanced attack led by its strong backcourt. Senior Sayeed Pridgett is one of the top players in the league, averaging 19.0 points and 7.6 rebounds per game. Pridgett is third in the BSC in both those categories. Pridgett also gets 2.0 steals per game, second in the league.

Next to Pridgett is senior Kendal Manuel. Manuel is averaging 14.3 points and leads the league in free-throw percentage, stroking the nets from the charity stripe 89% of the time. UM heavily relies on Pridgett and Manuel, as the two guards are third and fourth respectively in minutes played per game in the BSC.

“They’re going to trap (and) be really physical,” EWU head coach Shantay Legans said of UM. “We have to match that physicality.”

“We already have a rivalry with Montana. … We don’t really like each other. Losing to them back-to-back years (is) in the back of your mind.” – Jacob Davison, Junior Guard

EWU and UM figures to be a hotly contested matchup. Here are The Easterner’s Three Questions going into Thursday’s matchup at Reese Court.

1. How will EWU defend UM’s backcourt?

Legans has said multiple times this season that he thinks Aiken is the best defender in the BSC. Aiken usually guards the opponent’s best player and figures to check Pridgett for part or most of the game, and either Magnuson or Davison will likely check onto Manuel. Davison said the team has been planning multiple defensive strategies.

“We have a couple different game plans that we’ve been working on this week to mix it up and make it so they don’t really know what we’re doing,” Davison said. “It’s going to be good and we’re excited to show it.”

Seeing how EWU defends UM’s backcourt and how UM responds will be interesting and will go a long way toward deciding a victor.

2. Will EWU’s ball movement be the difference?

EWU leads the BSC in assists per game (18.1) and UM is last (10.1). This has contributed to EWU having the top scoring offense in the league, as the Eagles are averaging 85.9 points per game. Magnuson has done an admirable job of distributing the ball to scorers like Davison, Peatling, Aiken, Tanner Groves and more. That ball movement offensively for EWU and potential lack thereof for the Griz could majorly affect the outcome of the game.

3. Can EWU fans provide a similar home-court advantage to that in Missoula?

Griz fans are loyal to their school. UM fans regularly are near the top of the conference in total game attendance, while EWU attendance is usually near the middle or bottom of the league. This game is a chance to change that against EWU’s biggest rival. First Thursday jokes aside, students are back in classes and can take advantage of free admission with their EagleCards to create a raucous Reese Court environment.

“Montana has a great fan base,” Davison said. “Especially against us, they really like to pack it in there. It would be awesome if our fans could show the same support.”