EWU hangs on to beat PSU behind trio of big performances 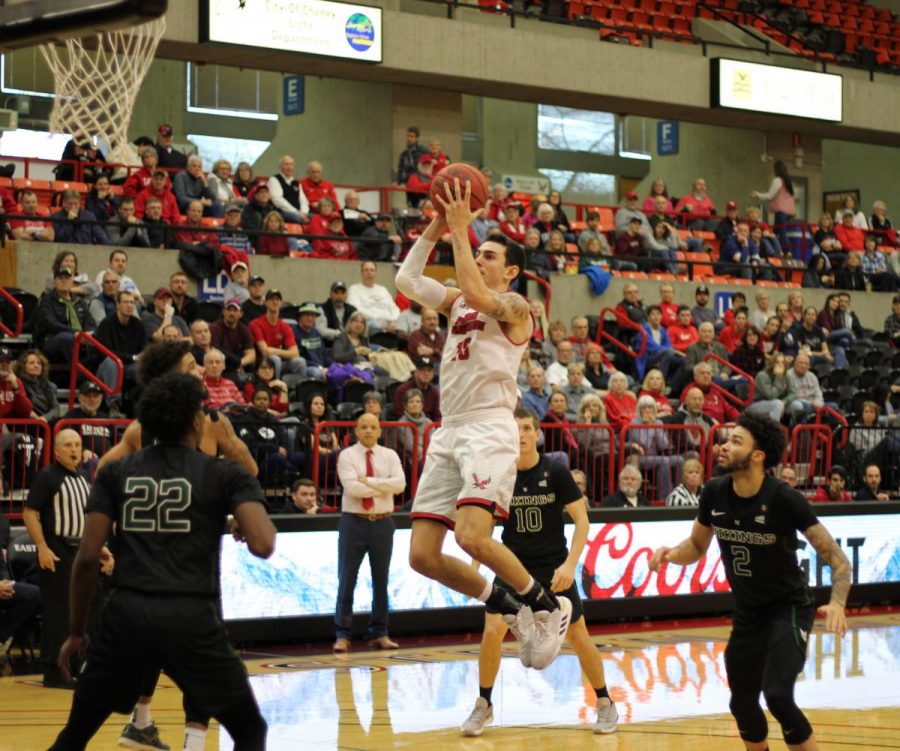 Drew Lawson for The Easterner

It got tense in the last minute, but the EWU men’s basketball team (2-1, 9-5) squeaked out a 71-69 victory over the Portland State Vikings (1-3, 7-9) in the first Big Sky Conference game at Reese Court this season.

EWU was led by a trio of huge performances from its biggest contributors. Junior guard Jacob Davison led all scorers with 26 points. Senior forward Mason Peatling and sophomore guard/forward Kim Aiken Jr. both had double-doubles, as Peatling had 20 points and 13 rebounds while Aiken had 15 points and 15 rebounds.

“Rebounding was the key to the game,” Aiken said. 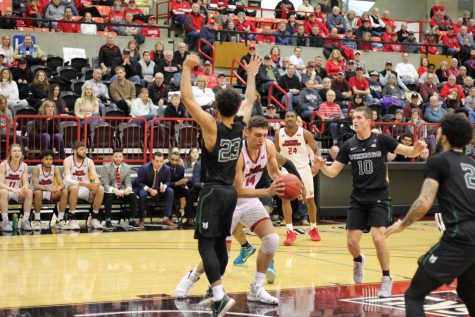 Drew Lawson for The EasternerEWU senior forward Mason Peatling ducks toward the basket. Peatling had 20 points and 13 rebounds Saturday.

PSU started hot, building a lead as large as 12 at 26-14 with 8:51 left in the first half. Davison then put EWU’s offense on his back, scoring 24 of EWU’s next 49 points as the Eagles clawed back. Davison’s fastbreak one-handed alley-oop dunk off an assist from freshman guard Ellis Magnuson gave EWU a 54-52 lead with 8:09 left, and his reverse fastbreak dunk put EWU up 63-57 with 5:29 left.

“When you get him going to the basket, it’s really hard to guard,” EWU head coach Shantay Legans said.

While Davison carried the load for that 23+ minute stretch, it was Peatling who brought EWU home. The senior scored six of EWU’s final eight points, all on layups. Peatling’s final layup gave EWU a 71-61 lead with 2:09 left, but the game wasn’t over yet.

PSU scored eight straight points after hitting two three-pointers. EWU missed two critical free throws and turned the ball over three times in the final two minutes. The last missed free throw came with 4.2 seconds left. Peatling’s one-and-one attempt bounced off the back rim. PSU’s Markus Golder grabbed the rebound and tried to get the ball to a teammate, but didn’t make the pass as time expired.

Legans credited PSU’s failure to get a shot off to Aiken’s defense on PSU’s best player, Holland Woods. Aiken prevented Golder from making a pass to Woods streaking down the court for a potential game-winning or tying shot.

“Kim made a great, instinctive play to deny the guy the ball on the fly,” Legans said. “When you’re able to make plays like that as a player, it really helps the coaches out.”

EWU’s next matchup is a big one, as the rival Montana Grizzlies come to Cheney after a 3-0 start in conference. The Jan. 9 tip-off from Reese Court is scheduled for 6:05 p.m.