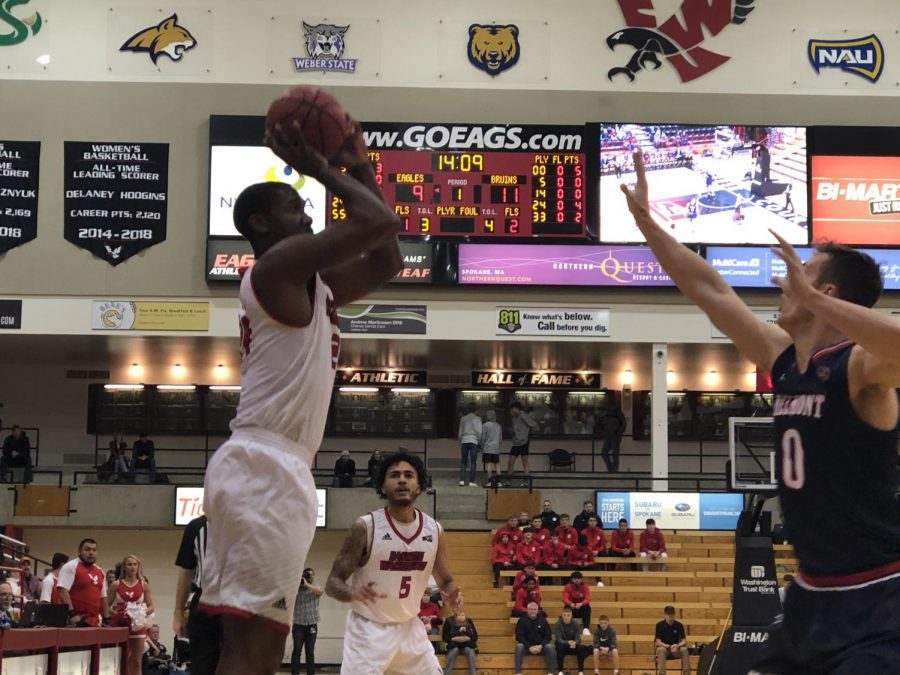 “Our guys came out, took it upon themselves and had a really great game,” EWU head coach Shantay Legans said. “They stuck to the game plan throughout and just did a really great job.”

Senior forward Mason Peatling led the way with 17 points, while sophomore forward Tanner Groves had 14 big points off the bench, including a personal 8-0 run in the second half. Sophomore guard/forward Kim Aiken, Jr. added a double-double with 11 points and 11 rebounds, including four key free throws in the final minute to seal the game for the Eagles.

While Muszynski had his way for most of the game, Belmont had difficulty getting going from behind the three-point line, going 9-24 from behind the arc. This played into EWU’s game plan, according to Legans,

“When they win games, they hit 13-plus threes,” Legans said. “We can’t let them have over 10 three-pointers, and we did that tonight.”

Legans said EWU’s game plan was to go one-on-one in the post and prevent Belmont from getting hot from distance.

“We stuck to the game plan,” Legans said. “We didn’t want them to get a lot of threes up.”

EWU received big contributions from its freshmen. Guard Ellis Magnuson had one of his best games of his short career, scoring 13 points and contributing nine assists.

Magnuson said Legans had been pressuring him throughout last spring to be more aggressive, so he decided to accept that call.

“(Being aggressive) is what I’ve been doing,” Magnuson said. “Just making the right plays.”

Redshirt freshman guard Casson Rouse was 3-3 from three point range and scored five straight big baskets in the second half when Belmont had built a seven point lead to keep EWU close.

Rouse also guarded Belmont’s leading scorer, Adam Kunkel, for most of the game and held him to just 10 points. Kunkel came into the game averaging 19.2 points per game.

“I like playing defense and guarding the other team’s best player,” Rouse said.

True freshman forward Jacob Groves teamed up with his brother, Tanner Groves, to score 13 straight EWU points in the second half. Jacob Groves was originally going to redshirt this season, but has been getting playing time with sophomore guard Jack Perry injured.

Legans said the contribution from the Groves brothers, who are Shadle Park High School alumni, was huge for the team.

“Having those two guys with their size, … that really helped us on the defensive end,” Legans said.

EWU gets eight days off before heading west to take on the Washington Huskies of the Pac-12 Conference on Dec. 4. Tip-off is at 7 p.m. The game will be broadcast on PAC-12 Networks.