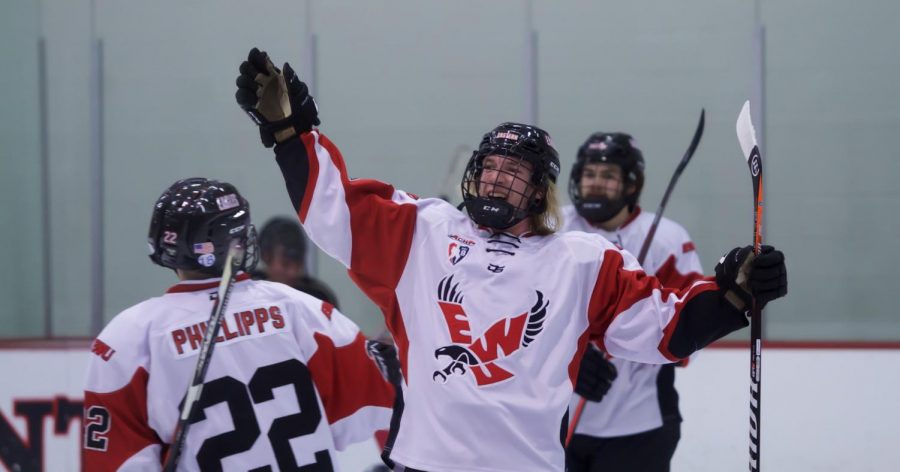 EWU was led in scoring by sophomore forward Mitch Hunt. Hunt had a hat trick Friday night, and now leads the team in total goals (13), assists (9), and total points (22).

Despite the win, EWU head coach Tyler O’Donnell was dissatisfied with the team’s effort Friday.

“I thought our effort was severely lacking tonight,” O’Donnell said. “We brought it together a little bit more in the third… but we did not put together a complete game… and it’s irritating.”

O’Donnell said the lack of effort could have been the result of EWU not taking UI seriously.

“Guys (were) thinking they were going to come in here and it was going to be point night,” O’Donnell said.  “It took until the third period to realize hey, we got to put our nose to the grindstone and get stuff done.”

O’Donnell said it was nice to see some guys who don’t normally fill the stat sheet get in on some scoring Friday night.

Dinwoodie’s first goals of the season came Friday. He said that it was nice to finally score his first goals.

“It was kind of a relief, and a great feeling,” Dinwoodie said. “I’m glad it was with those guys.”

Hunt said the team has trouble with playing at the level of their opponent at times.

“We always come out flat,” Hunt said. “I don’t know if it is practice during the week or what it is …  if we play like (we did in the third period) against Boise, Oregon and Cal … we shouldn’t have any problem down the road.”

EWU’s next game will be against Loyola Marymount on Nov. 14th in Harbor City, California.