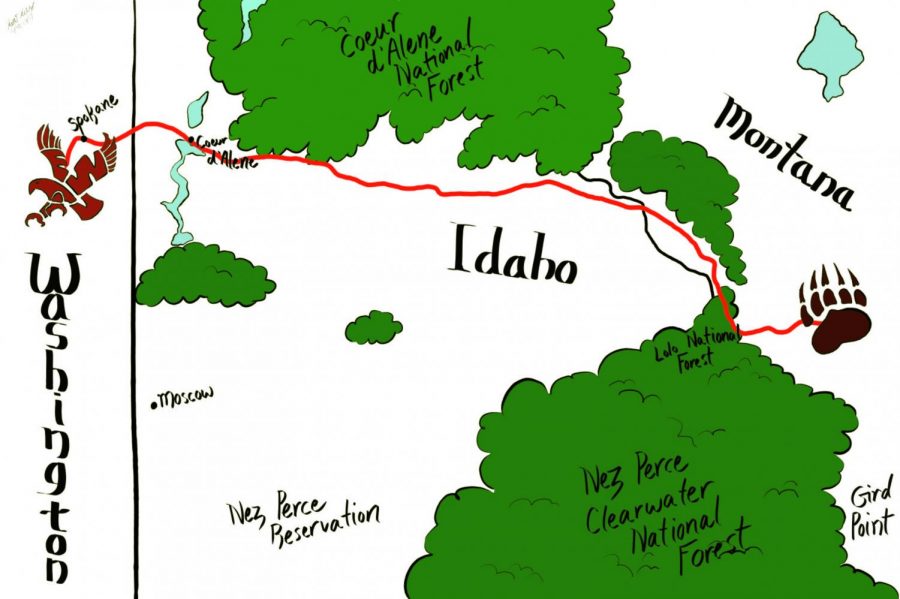 Illustration by Keri Kelly for The Easterner

There’s nothing better than a good rivalry in sports. The storylines are cliche, but classic: Neither team likes the other. Legacies are on the line. The stakes have never been higher.

“It means a little bit more against (UM),” EWU head coach Aaron Best said. “It always has, it always will, just based on the sheer competitiveness of the games over the years.”

EWU can’t afford another loss in its final five games if it hopes to advance to the FCS playoffs. The first of those wins will have to come at Washington-Grizzly Stadium. EWU has yet to win on the road this season.

EWU senior tight end Jayce Gilder said the team will be fired up to get that first road win.

“I don’t think it’s very hard to get excited for this game,” Gilder said. “Everyone’s aware that we haven’t won on the road yet this year, so we’ll be hungry to do that.” 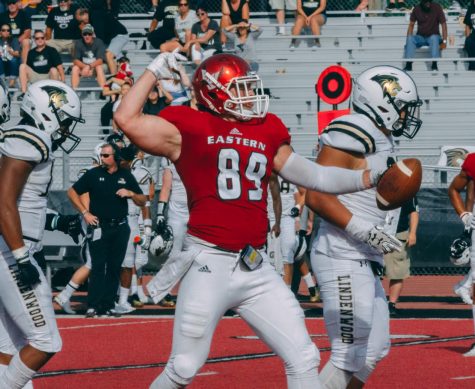 Malati Powell for The EasternerEWU senior tight end Jayce Gilder celebrates a first down on Sept. 7. Gilder will be playing in his home state of Montana Saturday.

UM has had a highly successful 2019 campaign, ranking as high as No. 5 in the FCS. However, UM was hit hard with adversity on Oct. 19. The Griz were thrashed by Sacramento State 49-22 and lost senior quarterback Dalton Sneed to a right leg injury. Sneed is doubtful for Saturday’s game against EWU.

The Griz are formidable, even with Sneed likely out. UM will turn to junior Cam Humphery at quarterback if Sneed can’t go.

Humphery transferred to UM from Saddleback Community College in 2018 and has been Sneed’s backup since then. Humphery has appeared in six games this season. He has 182 yards and one touchdown pass with a 43.3 completion percentage.

For EWU to earn its first road win of the season against its classic rival, the Eagles will likely have to play their best game of the season.

The Easterner’s three keys to victory

The Griz have been exceptional in the third quarter this season, outscoring opponents 95-44. Meanwhile, EWU has been outscored in the third quarter 63-58. If the Eagles can flip the script on this trend, the pressure shifts to the Griz, who are trying to avoid a disappointing loss for the second week in a row.

Even without Sneed, Montana boasts a strong offense that’s averaged 38.3 points per game this season. Luckily for Eagles fans, EWU has the ability to match that offensive attack. EWU must try to do so while controlling the time of possession. The fewer opportunities the Griz have to score, the better chance EWU has of escaping Missoula with a dub.

Gilder said if EWU is able to get in an offensive rhythm and keep Montana off the field, the defense will benefit.

“When our offense is rolling, it’s huge for our defense,” Gilder said. “I think it’ll be huge on the road in that environment to get settled down.”

3). Force Humphrey to win the game.

When a team is forced to start its backup quarterback, its coaching staff usually comes up with a conservative game plan that avoids putting too much pressure on that signal-caller. If the Griz follow this trend with Humphery under center, EWU would be wise to try and disrupt that plan by stopping the run and creating long down-and-distance situations.

EWU senior defensive end Jim Townsend said the defense’s goal every week is to make the quarterback move out of his comfort zone.

“If we’re able to get to (Humphery) and … get him throwing on the run, I think we can maybe affect him a little bit,” Townsend said.

If Humphery is forced to make difficult throws, EWU’s chances of a victory likely increase.