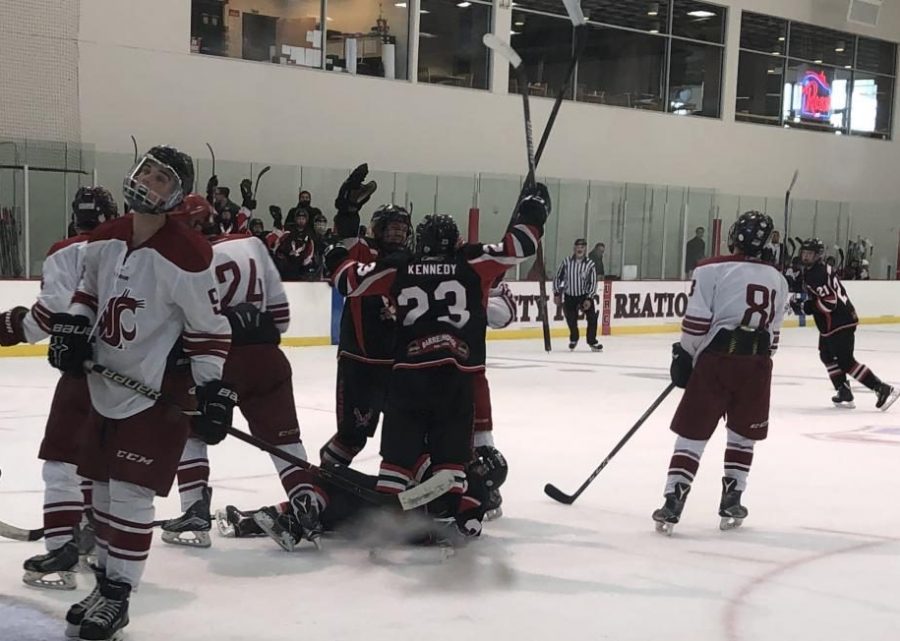 EWU celebrates a goal. The Eagles swept WSU in a two-game series over the weekend.

The Eagles are now 3-0 since interim head coach Tyler O’Donnell took over the reigns. Former head coach Greg Sherman was fired on Oct. 17.

O’Donnell was pleased with the play he saw in both games.

“That kid, after missing so much time … comes back into the lineup and is immediately your hardest worker,” O’Donnell said. “He was a leader by example.”

In the first game, senior defenseman Hayden Boring and sophomore Mitch Hunt each scored a goal.

Hunt said the team’s comradery and chemistry isn’t going to change despite the recent off the rink distractions.

“It’s (going to) be the same all year,” said Hunt. “It doesn’t matter when it happens off the ice … what matters is what happens on the ice.”

“Defensively I thought we played a little back and forth,” said Moenar. “(The) third period really showed how defensive can come together … everything came together because our defense buckled down and communicated.”

Hunt said EWU has to focus on rehabbing before the quick turnaround the team faces this week.

“Some guys have tweaks to their body that they really need to take care of,” Hunt said. “When it comes to the rink, it has to be 100% bought in …  if we buy in, we should be just fine.”

EWU will play BYU on Thursday, Oct. 24th and Boise State on Oct. 25 and 26. All games will be played at the URC in Cheney.