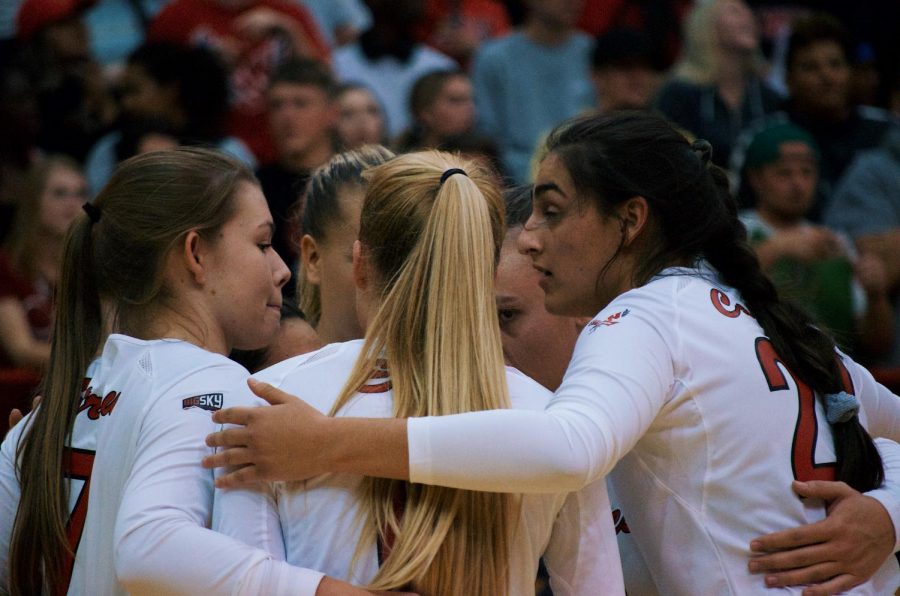 EWU huddles after a point is scored. The Eagles fell to Sac State in four sets Thursday.

“That’s a really, really good Sacramento State team,” said head coach Leslie Flores-Cloud. “We were slow out of the gates and I think once we found some rhythm, we were able to show how good we can be.”

The Eagles were led by sophomore Ashlyn Blotzer, junior Catelyn Linke and freshman Nicoletta Capizzi, who combined for 21 kills. Blotzer, who led the team with eight kills, also led the team in blocks with four. Junior Puaoolelagi Sao had 15 digs and junior ShaRae Niu had 14 assists.

“I think we ran out of gas,” Flores-Cloud said. “We have the ability to play really good Eagles volleyball and that’s what we’re looking for and will always strive for that.”

Over 500 fans were in attendance at Reese Court Thursday.

“The environment was great—a huge fan base tonight,” Blotzer said. “It really helped us to have fans cheering (us) on.”

The Eagles will be looking for their first home win of the year tomorrow as they take on Portland State at 7:05 p.m. at Reese Court. The game is free for both students and the general public.