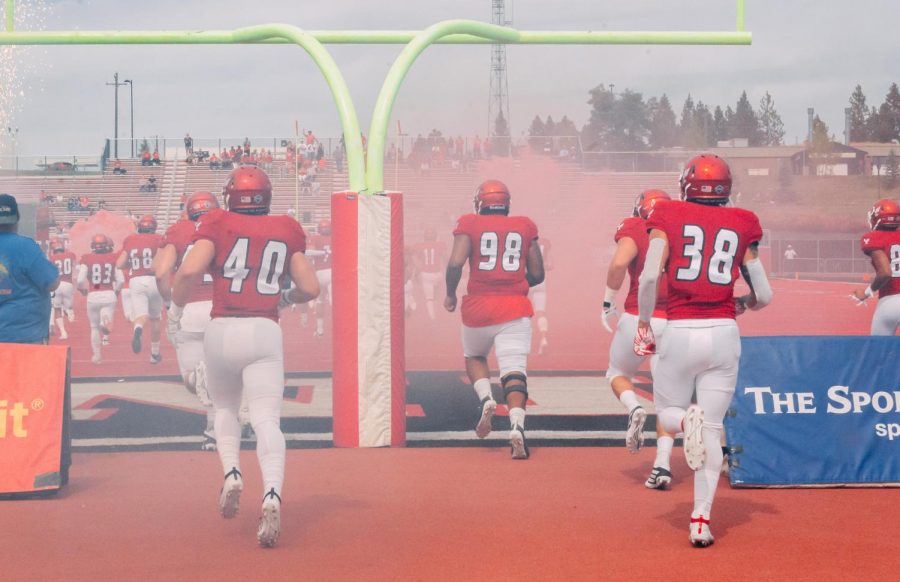 EWU takes the field for its home opener against Lindenwood on Sept. 7. EWU won the game 59-31.

Yes, you read that headline right.

The No. 11 EWU football team (1-2) travels 90 minutes southeast to Moscow this weekend to take on the Idaho Vandals (1-2) in a nonconference tilt. Both teams are members of the Big Sky Conference, but weren’t originally scheduled to play each other this year. However, both teams had the same weekend open, so the two schools decided to add a 12th game to the schedule.

Idaho leads the all-time series 15-7, but EWU looked like the big brother in 2018 with a 38-14 victory at Roos Field. Last year was Idaho’s first game back in the BSC after a 22-year run as an FBS team.

EWU hasn’t gotten off to a strong start in 2019, as the Eagles have matched their total number of losses (2) from all of 2018. After getting routed by Washington 47-14 in the season opener, EWU was outscored 21-0 in the fourth quarter on Sept. 14 and lost at No. 10/13 Jacksonville State 49-45. Head coach Aaron Best said every loss is magnified at EWU due to the program’s long-time success.

“Those (losses) sting a little bit more, but we’ll learn more from it,” Best said.

Idaho has also played inconsistently through three games. The Vandals were destroyed by Penn State 79-7 on Aug. 31 and narrowly defeated Division II Central Washington 41-31 on Sept. 7 in their home opener. Last week was Idaho’s best performance of the season, albeit in a loss. The Vandals narrowly fell at Wyoming 21-16. Wyoming is an FBS school in the Mountain West Conference.

Idaho is led offensively by senior wide receiver Jeff Cotton. Cotton has 319 yards and two touchdowns receiving. Defensively, Idaho has been led by sophomore linebacker Tre Walker, who has 30 tackles.

The Vandals have used two quarterbacks so far this year. The majority of the snaps have been taken by senior Mason Petrino, the son of Idaho head coach Paul Petrino. Petrino has 484 yards and three touchdowns passing. Junior Colton Richardson has attempted 14 passes and completed seven of them for 59 yards.

EWU starting 1-2 after a season in which it lost just two games all year raises questions about where this 2019 group will finish by the end of the campaign. Below are The Easterner’s three questions that could be answered this Saturday or farther down the line as the 2019 season progresses.

1. Will the running game continue to get better?

Senior running back Antoine Custer Jr. had easily his best game of the season against JSU, running for a career high 184 yards on 28 attempts. It was probably EWU’s best game running the football as a whole in 2019, given the season high is against Division II Lindenwood and many of the rushing yards in that game came when the score was out of hand. Idaho ranks last in the BSC in rushing defense so far, so EWU has a prime opportunity to feed Custer, control the clock and dictate tempo at the Kibbie Dome Saturday.

In 2018, the EWU defense allowed just 22.7 points per game despite losing six starters to injury throughout the season. The injury bug is starting to bite the Eagles again in 2019, with up to five key contributors possibly out this Saturday against Idaho. Both starting linebackers, senior Jack Sendelbach and junior Chris Ojoh, weren’t suited up for practice on Tuesday. Ojoh sprained his right ankle against JSU and Sendelbach was seen at practice with a sling around his right elbow. Sendelbach and Ojoh are first and third on the team in tackles respectively.

With so many injuries, EWU will have to once again rely on its depth and backups to step up as conference play draws near. Can players like seniors Andrew Katzenberger and Trevor Davis Jr. step up at linebacker with Sendelbach and Ojoh ailing? Can senior Bradley Alexander rise to the occasion if Darreon Moore has to miss time? Positive answers to these questions would serve EWU well as the season progresses.

3. Can the kicking game find consistency?

Last year, kicker and punter Roldan Alcobendas was the model of consistency for EWU. This season has been a bit rockier. Junior kicker Andre Slyter boomed a 50-yarder against Lindenwood, but is just 1 for 3 this season and missed the game against JSU with a leg injury. Freshman Seth Harrison filled in adequately and didn’t miss a kick, but Harrison wasn’t asked to make a field goal beyond 22 yards.

Meanwhile, junior punter Trevor Bowens has a net average of just 35.5 yards per punt, which is in the bottom 10 at the FCS level. Bowens’ average took a hit against JSU with a blocked punt that wasn’t his fault going just 13 yards, but EWU needs more production from the third unit as the season goes on.