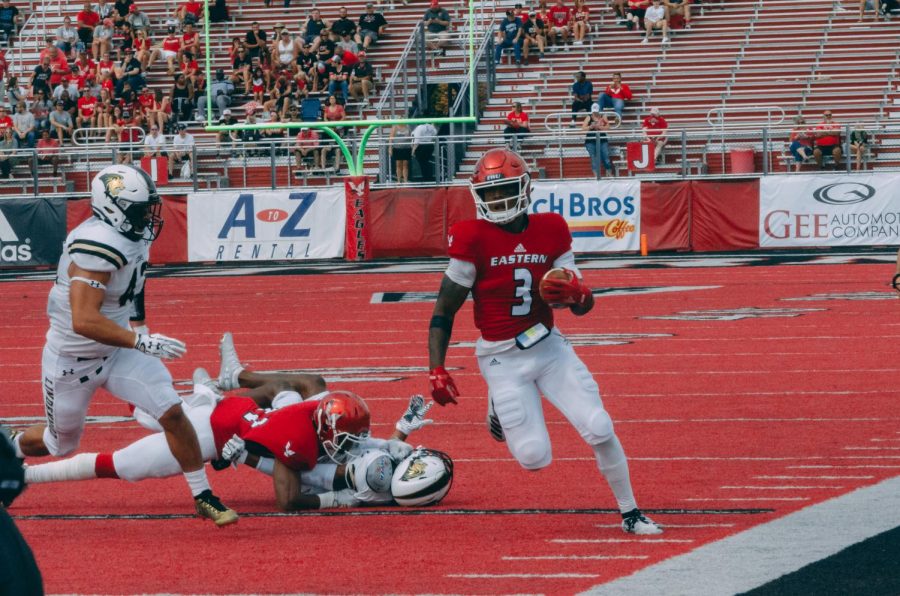 After EWU junior quarterback Eric Barriere threw his third touchdown pass of the first quarter to give the Eagles a 28-7 lead, it appeared No. 4/5 EWU (1-2) might have been on its way to a dominant road victory against the No. 16/17 Jacksonville State Gamecocks (2-1). That wasn’t the case, however, as EWU was outscored 21-0 in the fourth quarter and 42-17 in the last three quarters in a crushing 49-45 defeat Saturday.

EWU couldn’t have asked for a better start to the game. Senior Dre Dorton returned the opening kickoff 90 yards for a touchdown, and Barriere started 11-12 with three touchdowns. Barriere threw his first pick of the season in the second quarter, an interception by JSU’s Marlon Bridges that was taken back for a touchdown, but EWU still held a comfortable lead at halftime of 35-21.

JSU cut the deficit to seven at the start of the second half, but a 51-yard strike from Barriere to junior wide receiver Talolo Limu-Jones gave EWU a 45-28 lead heading into the fourth quarter. EWU appeared to be in control, but a series of poorly executed plays served to doom the Eagles.

JSU quarterback Zerrick Cooper, who threw for 249 yards and three touchdowns while rushing for 96 yards and a score, ran in a 15-yard touchdown while breaking several tackles on the first play of the final quarter. After the two teams traded punts, Barriere took a sack for a loss of 16 yards back to the four yard line.

EWU’s punting has been an issue all season, and that continued on the ensuing play. Trevor Bowens had his punt blocked and recovered by JSU at the EWU 13. Michae Matthews ran in a 3-yard score for JSU, and suddenly it was a three-point game.

With the pressure squarely on the EWU offense in a late-game situation for the first time all season, the Eagles managed a first down but threw incomplete passes on the following three plays. Bowens’ ensuing punt was downed at the JSU 32. Cooper then marched the Gamecocks down the field all the way to the EWU one yard line with an 11-play drive that spanned 3:39, and Matthews gave JSU the lead with a one-yard score with 59 seconds left.

Barriere threw another interception on EWU’s ensuing drive to end a game in which EWU led for nearly 59 minutes of game time, but were on the wrong end of the scoreboard when the clock read 0:00.

Barriere finished the game with 294 yards, five touchdowns and two interceptions passing. Senior running back Antoine Custer Jr. ran for a career high 184 yards. Limu-Jones had 89 receiving yards and one score, while Williams had 54 yards and two touchdowns. Sophomore wide receiver Andrew Boston had 68 yards and a score.

EWU wraps up non-conference play next Saturday with a trip to Moscow, ID to take on the rival Idaho Vandals. Kickoff is scheduled for noon PST.