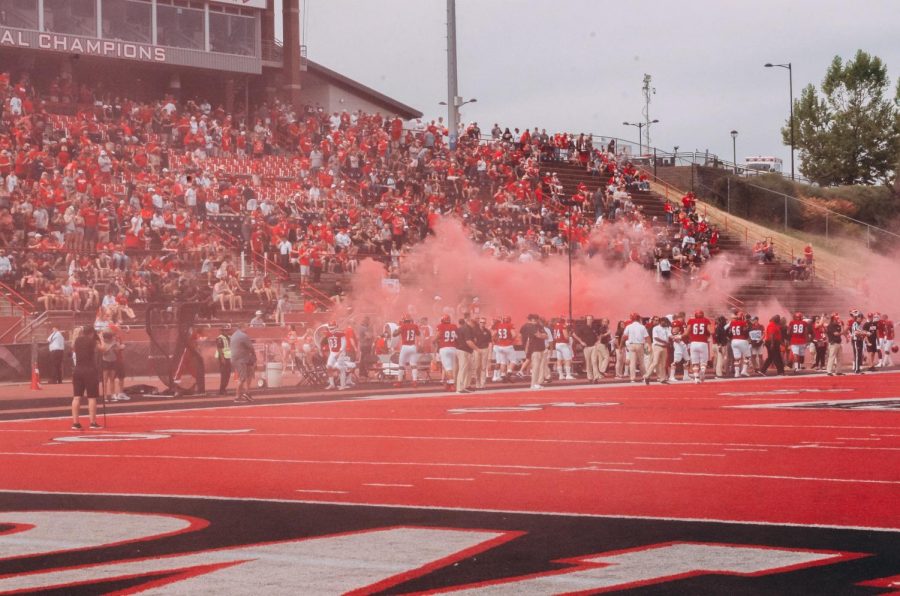 EWU takes the field prior to its 59-31 victory over Lindenwood Sept. 7. EWU takes on Jacksonville State on Sept. 14.

During EWU’s 2018 FCS semifinal victory over Maine, this Eagle fan made a bold proclamation with this sign, stating “We Want Bama” in reference to the perennial FBS powerhouse Alabama Crimson Tide.

This weekend, that fan won’t quite get his wish granted, but will get to see the No. 4/5 Eagles (1-1) travel to the state of Alabama to take on the No. 17/18 Jacksonville State Gamecocks (1-1) this Saturday. JSU, which is located in Jacksonville, AL, is the first FCS opponent for EWU this season.

JSU has won the past five Ohio Valley Conference titles and have 16 straight winning seasons, the most in the FCS. The Gamecocks advanced to the second round of the FCS playoffs in 2018 before getting eliminated in the second round by Maine. JSU is a formidable team at home, having won 49 of their past 54 games in Jacksonville. JSU was upset at Southeastern Louisiana in its season opener 35-14, but bounced back last week with a 41-20 win over Chattanooga in its home opener.

JSU has a high-powered offense that will be challenging for EWU’s defense to keep in check. The Gamecocks are led by junior quarterback Zerrick Cooper, who’s averaging 389.5 yards of total offense per game in 2019. The former Clemson Tiger was a Sophomore All-American and first team All-OVC performer in 2018. EWU head coach Aaron Best said Cooper never panics due to his wealth of experience.

“He’s got a ton of weapons around him,” Best said. “I don’t think you stop Mr. Cooper, I think you contain him and its got to be an 11-man outfit on that side of the ball to do that.”

JSU’s leading receiver through two games is junior tight end Trae Berry with 16 catches for 234 yards and a score. The Gamecocks start three seniors at wide receiver in Jamari Hester, Daniel Byrd and Josh Pearson. JSU also goes three-deep at running back, with its leading rusher being freshman Austin Kinsey, who has 104 yards and two scores in 2019. EWU sophomore defensive end Mitchell Johnson said JSU’s running back corps will be one of the best EWU faces this season.

“They’re physical, they’re fast and they’re mean,” Johnson said. “I think it’s going to be a fun test for our run stopping defense.”

Saturday’s game will be a big non-conference challenge for EWU. Below are The Easterner’s three keys to victory. This week, they’re combined with three position units to watch in Saturday’s game.

Three Keys to an EWU Victory

One of EWU’s projected strengths coming into the season was its vastly experienced offensive line, led by sixth-year seniors in center Spencer Blackburn and right guard Kaleb Levao and senior right tackle Chris Schlichting. While the unit has done a fairly good job through two games of giving EWU quarterback Eric Barriere time to throw, the Eagle signal-caller has ended up on his back more times than EWU would desire thus far. Through two games, Barriere has been sacked six times and has had to use his quick feet to escape the pocket and prevent that number from being higher. JSU could put up a fair amount of points Saturday, so Barriere will need time to throw for the EWU offense to keep up with the Gamecocks.

One of the big question marks coming into 2019 for EWU was the cornerback position after EWU’s top four players at that position from 2018 graduated. The group has done little to answer those questions thus far, as EWU has allowed 659 yards and eight touchdowns through the air so far. It won’t get easier for the Eagles on Saturday with Cooper and his experienced wideouts making plays in their home stadium, so improved pass defense is paramount for EWU to pick up a road victory. Keep an eye on redshirt freshman Tre Weed, who made his first career start at corner on Sept. 7 against Lindenwood and is expected to start again this Saturday against JSU. The other starter at corner is sophomore Darreon Moore, who has started both games in 2019. Sophomore Ira Branch, who started Week 1 against Washington, could also factor into the group going forward.

Cooper is probably the most talented FCS quarterback EWU will face during the regular season, so allowing him to hang in the pocket and make plays with his arm and legs could spell trouble for EWU. Best noted after the win over Lindenwood that EWU needs to do a better job of limiting plays where defenders wrap up an opposing quarterback, but fail to bring him down and instead allow him to escape the pocket. Cooper is the best quarterback at doing such a task that EWU has faced so far, so getting pressure in his face and trying to make his life as difficult as possible would greatly aide the Eagles’ chances of winning.