Eagles rack up the yards offensively in first win of 2019 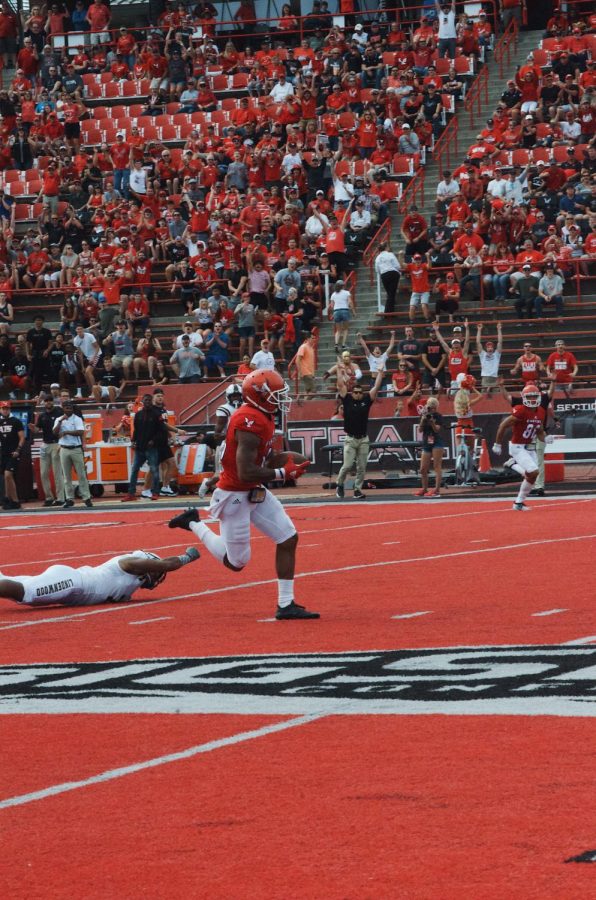 There’s a new wide receiver wearing the No. 10 and breaking records for EWU.

Senior Dre Dorton broke Cooper Kupp’s school record for receiving yards in a game with 289 and added three touchdowns as EWU (1-1) knocked off Division II Lindenwood (0-1) 59-31 for its first victory of the 2019 season Saturday. EWU’s 769 yards of total offense was also a school record.

EWU head coach Aaron Best had high praise for Dorton’s performance, saying that any time he hears the word “Cooper” he immediately associates it with greatness.

“Any of Cooper Kupp’s records, everybody once thought they were untouchable,” Best said. “Well, today they were touched and exceeded by a Tri-Cities fellow named Dre Dorton. I’m proud of Dre.”

EWU junior quarterback Eric Barriere had a career day of his own throwing the football. His 522 passing yards were a career high and were second most in EWU history behind Gage Gubrud’s 549 (set in 2017). Barriere threw for five touchdowns and added another on the ground.

It took one offensive play to set a theme that would last the whole afternoon. Barriere found Dorton for a 78 yard touchdown 17 seconds into the game. EWU scored touchdowns on its first three drives and led 31-0 before 20 minutes of game time had elapsed. Dorton said that taking deep shots was always part of the game plan.

“Right off the bat we were going with the deep (throw),” Dorton said. “We (wanted) to set the tempo, set the tone of the game.”

Dorton had just 50 receiving yards in all of the 2018 season and just six last week before his record-setting performance today. He said that he never imagined that he’d one day break a record held by Cooper Kupp.

“That wasn’t even in my mind,” Dorton said.”I didn’t think I’d get close to breaking (Kupp’s) record.”

According to Dorton, he and Barriere have been close friends ever since Barriere arrived at EWU as a freshman. Today, they both wrote their name in the school record book.

“As soon as he came to (EWU), we connected just like that,” Dorton said. “We’ve worked out together every summer, every single day…we’re pretty much brothers.”

Despite the record-setting performances by Dorton, Barriere and the EWU offense, it wasn’t a perfect day at the office for the Eagles. EWU had 12 penalties for 134 yards and went through a stretch in the second and third quarters where it was outscored 31-14. Senior safety Dehonta Hayes wasn’t thrilled with the Eagle defense going through a second and third quarter lull, but said the EWU defense will improve.

“They shouldn’t have scored 31 points, and we know that,” Hayes said. “We’re going to take that as a chip on our shoulder…we’ll be better.”

Another down moment for the Eagles came early in the second quarter when running back Dennis Merritt suffered what appeared to be a serious left leg injury. Merritt’s leg was put in an air cast. The senior, who was leading the team in rushing at the time, was carted off after being surrounded by teammates showing their support.  Hayes said seeing his teammate experience a serious injury was extremely difficult and may have contributed to the lull EWU experienced in the second quarter.

“When you see somebody who works so hard, like Dennis…it’s just devastating,” Hayes. “That whole quarter was a tough one for us to bounce back from, but we found a way.”

Junior kicker Andre Slyter boomed a 50-yard field goal in the second quarter that probably would’ve been good from 55+, but missed a 47-yarder in the third and ended up leaving the game with an undisclosed injury. Slyter was replaced by Seth Harrison.

EWU has a challenging game next week, travelling to Alabama to take on #18 Jacksonville State. Kickoff is scheduled for 1:05 p.m. PST and will be televised on ESPN+.