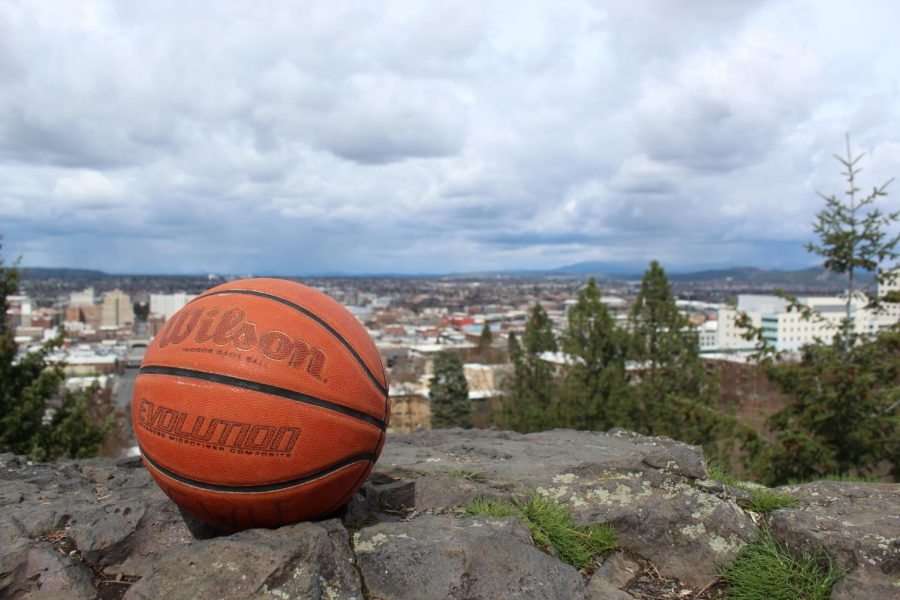 Basketball is a part of Spokane's culture. Successful programs at Gonzaga and Hoopfest—the world's largest 3-on-3 tournament fuel the city's love for the game.

You don’t have to spend much time in the Spokane area to notice that baseketball is a big deal in the community. Baskets stand on driveways, in garages and are within most public parks. Local YMCAs and athletic clubs host pickup games every hour of the day and night, and Gonzaga packs the house for every home game.

Several EWU men’s and women’s players and coaches have grown up or gone to college in the Spokane area, and they shared their perspectives on the influence basketball has made in the Inland Northwest.
A legend’s pickup game
Men’s assistant coach David Riley, a Whitworth alum, received a special invitation during his college days. Hall of Famer and GU legend John Stockton, the NBA’s all-time leader in assists and steals, invited Riley to come play an exclusive pickup game along with other players in the area one Sunday afternoon. Stockton frequently invites local high school and college players that he has a connection with to come play in his pickup games.

“When you get invited to John Stockton’s game that’s a pretty cool thing,” Riley told The Easterner. “I just happened to play with his nephew at Whitworth … If you go one time and you play decent, he’ll text you and tell you to come back. It’s just a regular pickup game with people that he’s close to, I guess.”

Riley, who grew up in Palo Alto, California, said Spokane has always seemed like a basketball town since arriving to play college ball for the Pirates.

“Growing up in the Bay Area and coming here, it was a basketball-centric city,” Riley said. “From the organized pickup games (to) the high quality basketball with Gonzaga, Whitworth and Eastern all around … It has been a basketball town for a long time.”

EWU women’s basketball assistant coach Bryce Currie grew up in Spokane and is a graduate of Ferris High School. He told The Easterner that Spokane is a “basketball mecca.”

“It feels like every kid has touched a basketball in Spokane at some point, or at least watched basketball,” Currie said. “It’s created, in a way, more of a tight-knit community with some of the success of programs in the area.”

The influence of basketball can be noticed in several areas around Spokane County. Gonzaga’s men’s basketball team finished the 2018-2019 season ranked No. 6 in the A.P.’s final poll after advancing to the Elite Eight of the NCAA Tournament. The Bulldogs’ women’s team also advanced in the NCAA Tournament before getting eliminated by Oregon State in the second round.

The NCAA women’s regional in 2018 was hosted at the Spokane Area, which includes two Sweet 16 games and one Elite Eight game. Spokane will also host men’s first and second round games in 2020 for the first time since 2016. The University of Idaho will be the host school for those games.
Hoopfest’s influnce
Another major basketball event in Spokane is Hoopfest—the largest 3-on-3 basketball tournament in the world. According to Hoopfest’s website, over 6,000 teams compete annually in various age and skill ranges. The event take over the city’s downtown, spanning 45 blocks, and will take place on June 29-30.

Currie credits Hoopfest as a main catalyst for the rise of basketball popularity and culture in Spokane.

“Hoopfest is one of those things that probably gets a little less credit for the Spokane culture of basketball than maybe Gonzaga does,” Currie said. “It’s easy to think right now, ‘oh my gosh, Gonzaga started the Spokane basketball trend,’ but really, I think it goes all the way back to the initial days of Hoopfest.”

Two EWU players that graduated from Spokane high schools competed in Hoopfest growing up. Cody Benzel, who just finished his senior season for the Eagles, and Tanner Groves, who just wrapped up his redshirt freshman year, both were on teams that won their division. Groves’ victory came during Hoopfest’s 25th Anniversary year. Some of Benzel’s favorite memories from playing in the area came from Hoopfest.

“I got to play with a lot of my childhood friends growing up all those years,” Benzel said. “When you win a couple of the years, which we did, it’s fun.”

Benzel, who like Currie graduated from Ferris, said the accomplishments of area colleges like Gonzaga and EWU inspired kids in the area to play more.

“It’s grown so much in the past 20 years,” Benzel said. “With AAU teams and traveling, the successes of Gonzaga, even Eastern and Whitworth … there’s more of a spotlight. (Spokane) is seen as more of a basketball place now, I’d say.”
Spokane’s hard-nosed mentality
Groves, who graduated from Shadle Park High School in 2017, said he spent hours playing in the street outside his house with his brother growing up. Groves’ brother, Jacob, has signed with EWU and is currently in his senior year at Shadle Park.

“Me and my brothers would always play one-on-one,” Groves said. “We used to get in a lot of arguments, fight all the time over basketball playing in the driveway. It’s pretty cool that we’ll be able to go to school together and play basketball.”

Groves said the dark and cold winters of Spokane have created a certain attitude of players that come out of the area.

“We get hit pretty hard with all the snow and different conditions,” Groves said. “A lot of the players that come out of Spokane and play college basketball are really tough, hard-nosed type players.”

Groves added that players who come out of Spokane to play college and even professionally do a great job of coming back to their roots.

“A lot of times you see a guy get big and he’ll forget about the town that he came from,” Groves said. “I don’t think that’s the case in the Spokane area. A lot of those guys really appreciate where they come from. They’ll always keep that name on their backs and remember that Spokane is where their love for basketball began.”