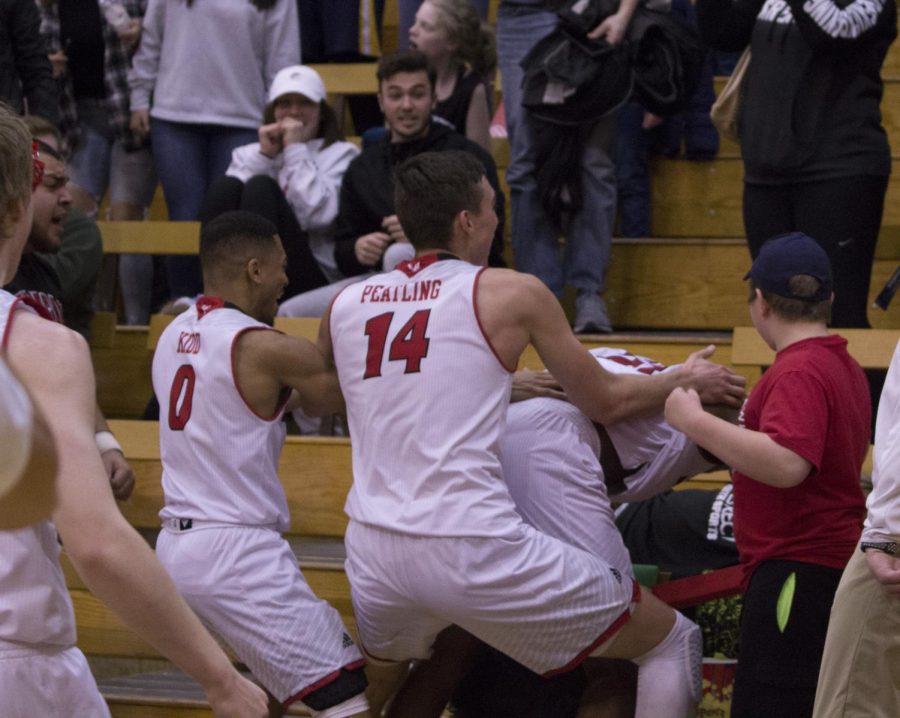 Juniors Mason Peatling and Tyler Kidd swarm freshman Kim Aiken, after Aiken made a buzzer beating 3-pointer to give EWU a 68-66 win on Saturday. Aiken led the Eagles with 19 points in the game.

Trailing by one point with just over nine seconds remaining in the game, it took a freshman to save senior night.

“I was still looking at the ball and making sure it went in,” Aiken said. “It was unbelievable. For them to rush me like that, I’ve never had that happen. I kind of wanted to cry.”

The winning shot came after senior Deante Strickland made a 3-pointer of his own to give PSU a one point lead.

Aiken led the Eagles with 19 points and added nine rebounds. Even with the final shot, EWU finished the night shooting 6-26 from behind the arc. Half of those 3-pointers came from Aiken.

Jesse Hunt led EWU’s seniors with 10 points and 10 rebounds. It was his 11th double-double of the season.

“It was a great way for my five years here to come to an end,” senior Cody Benzel said.

The win was crucial for the Eagles, who will now head on the road for games against Idaho State on March 7 and Weber State on March 9. The two road games will determine EWU’s seed in the Big Sky tournament that starts March 13, and will send one team to the NCAA tournament.

EWU is now a half game behind Weber and Montana State, who are tied for third in the conference at 10-7.

Going into tonight’s game, the Eagles were tied with PSU and Southern Utah at 9-7 for fifth place. The top five teams in the league are guaranteed a first round bye in the conference tournament.