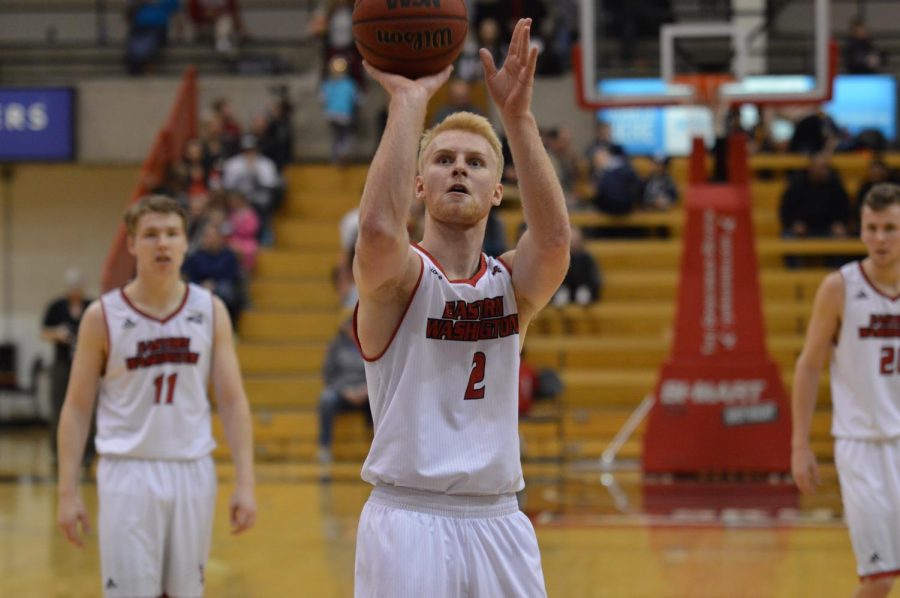 Basketball is a part of senior guard Ty Gibson’s family. His mom, Kathy Gibson, was the head coach of the Issaquah High School girls team for 15 years, and his sister is now in her second year as assistant coach of Linfield College, after concluding her career as a player.

As a senior at Issaquah High School, Gibson averaged 23.8 points per game on way to All-State and KingCo MVP honors. Despite his success, he said he wasn’t heavily recruited.

“Eastern came on the map toward the end of my senior year,” Gibson said. “I came on my visit and loved the guys and the coaches here. It’s fairly close to home so it is good for my family to be able to watch some games.”

Gibson is one of three seniors on the EWU roster, and one of seven returning players out of the 14 total. He said that he will need to take a leadership role this year.

“It’s on the older guys to show [the new players] how we do things,” Gibson said. “How to work hard and how to compete.”

In his career, Gibson has excelled from behind the arc. He came into the 2018 season with a 40.2 3-point shooting percentage, which is EWU’s No. 13 all-time. In total he has hit 119 3-pointers. Head coach Shantay Legans hopes that Gibson will expand his scoring role this year.

“We beg him to shoot more shots,” Legans said. “We have really good shooters here, we have for a long time and Ty really fits that mold. I want him to shoot 10-15 threes a game. He won’t because of who he is, but if he gets enough it’s huge.”

In EWU’s first two games this year, against Syracuse and Oregon, Gibson has yet to make an impact. He played just eight minutes against the Orange before leaving with an injury, and did not return for the Eagles’ game against the Ducks.

Legans said after the Syracuse game that Gibson suffered a concussion. He will be out indefinitely.

Gibson said before the season started that the team would have a lot of potential.

“It’s going to be a tough nonconference for us,” Gibson said. “We play a lot of good teams and we have some guys injured. But I think us at our best is right up there with the top of the conference. The goal is to get back to the Big Sky championship game and win it.”

In the nonconference schedule, Gibson looks forward to playing the University of Washington and Seattle University having grown up in that area.

“I definitely want to beat them,” Gibson said. “I grew up a UW fan watching their football and basketball, and they didn’t recruit me, so now I want to beat them. Seattle U, we’ve played them five or six times since I’ve been here, so we’ve built a little rivalry. Our old coach is there now, so there’s a little extra fuel.”

If Gibson is back and healthy, he and the Eagles will return to action on Friday night in their home opener against Wisconsin Green Bay at 4:45 p.m. The game is a continued part of the 2K Classic tournament, and EWU will play either UMKC or Morehead state at home on Saturday.