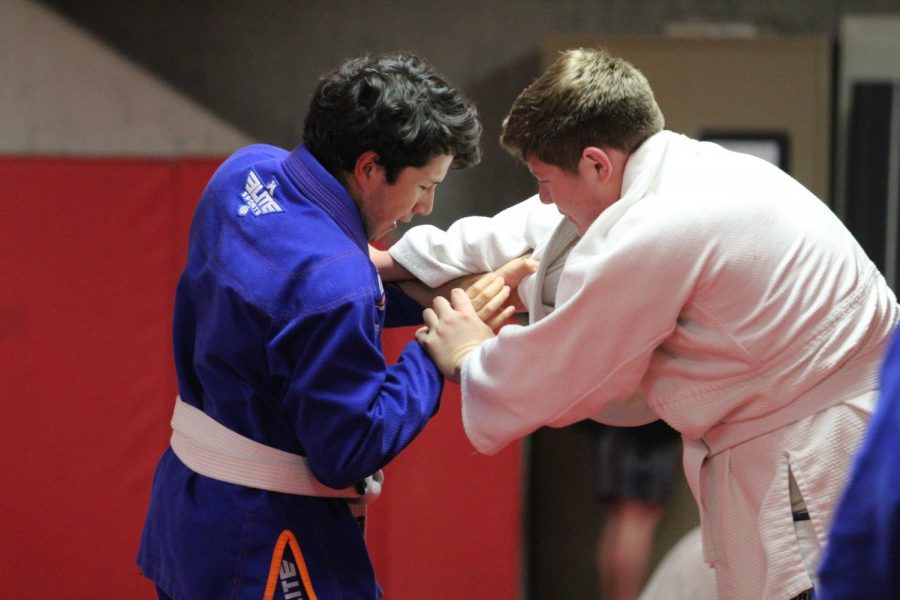 Members of the Brazilian ju-jitsu club grapple in practice on Oct. 22. The club meets bi-weekly in Reece Pavilion 309B.

When you walk through Reese Court during the afternoon there are many sights that catch the eye, from oversized logos of the members of the Big Sky, to the EWU Athletic Hall of Fame.

Behind the outer walls lies a room where people of all genders and body shapes gather twice a week to practice a form of martial arts called Brazilian jiu-jitsu.

Brazilian jiu-jitsu is a grappling martial art featuring two competitors trying to make their opponent “tap,” or submit in order to achieve victory.

“It’s a lot like wrestling,” club president Jeffrey Heatwole said. “It’s about submissions. […] With jiu-jitsu, you’re trying to get the same kind of stuff you are in wrestling, the takedowns, and use some of the same moves to get the other person to the ground. […] You try to do whatever you can to submit your opponent.”

When a person has been pinned to the ground, they acknowledge defeat by “tapping” their opponent. At that point, the match is over.

The Brazilian jiu-jitsu club was formed in 2015 by former student Erin Locke. When Locke graduated, Heatwole assisted with leadership and assumed the presidency. Heatwole has been studying jiu-jitsu on and off for 12 years.

EWU senior Alejandro Avalos has been a member of the club for approximately one year. He joined the club looking for something to do beyond the classroom, and said that he has learned life lessons through his participation.

“I’ve learned a lot about humility,” Avalos said. “When someone goes for a submission, you have to tap, and if you don’t tap you break an arm or something. It’s [about] getting rid of pride.”

Heatwole said that a focus of the club is diversity, and that no specific demographic is targeted for prospective members.

“We like to see females and males of all body styles and ethnicities,” Heatwole said. “There’s no discrimination in jiu-jitsu. You can find strengths and advantages with every body style. Sometimes the smallest person can be the most devastating, and it’s the same with the biggest person.”

Currently the club does not have a belt system in place, which would allow for members to try and move up in rank. However, Heatwole said the practice received at club meetings can prepare students for acquiring a belt elsewhere.

“We’re just covering essentials,”  Heatwole said.“ We [practice] what a student might need to get close to obtaining a blue belt if they went to a formal dojo.”