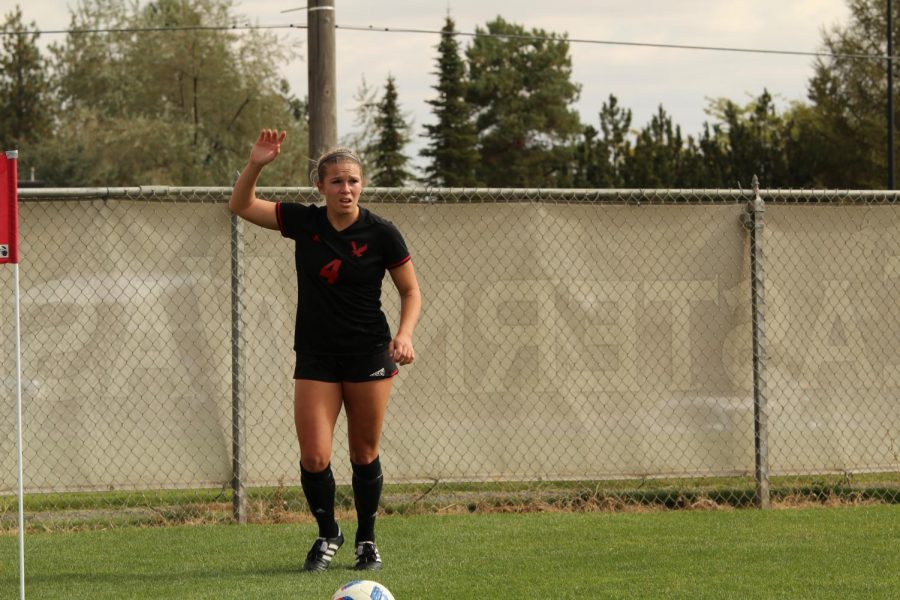 Senior midfielder Allison Raniere awaits a corner kick in a match against Portland State on Sept. 23. Raniere was an All-Big Sky honorable mention.

The Eagles took a quick lead in the ninth minute, off of the head of senior forward Jenny Chavez, but ultimately fell 3-1 to the University of Northern Colorado in the quarterfinals of the Big Sky Conference Tournament today.

UNC equalized in the 28th minute and earned a penalty right out of halftime to take the lead. The Bears tacked on another goal in the 76th minute to seal the Eagles’ season.

“We came out in the start of the game well,” head coach Chad Bodnar said. “We let Northern Colorado run at us and I think we were a little unlucky at the start of the second half with the way that shook out.”

EWU won three straight matches to qualify in the sixth seed for the tournament.

“These kids have fought hard to have come back to qualify,” Bodnar said. “Hats off to the seniors, they have done a lot of things here during their time at Eastern.”

This was the fifth straight tournament appearance for the Eagles, who are the two-time defending champions, and will remain so until a new champion is crowned on Sunday.