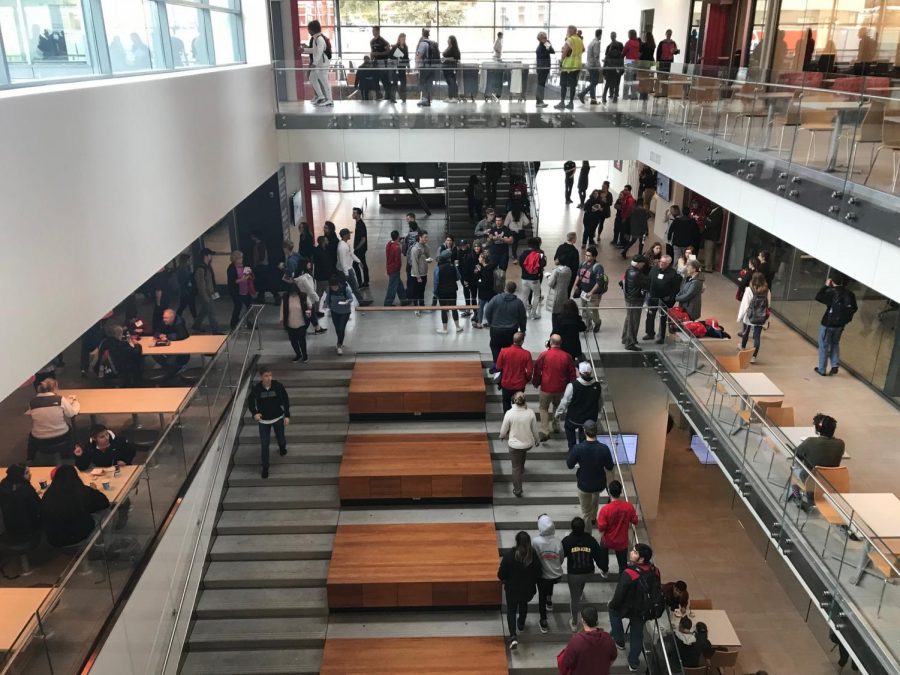 View from the third floor of the PUB. Students found new spots to sit and talk, and visited the many amenities the PUB will offer.

Students previewed the freshly remodeled PUB on Oct. 26, by flocking into the building and experiencing many of its amenities as a sneak peek before it officially opens.

Though commenced with a ribbon-cutting ceremony, EWU announced only days before, Oct. 22, that the PUB will not be completed until winter quarter.

Organizations such as the Multicultural Center had moved most of its belongings into the PUB from Showalter Hall over a week before the preview with the impression that the building would remain open after the event, according to Multicultural Center student program coordinator Nancy Vargas.

“So, when we moved over here we took all of our furniture and we literally just had a computer over there in Showalter,” Vargas said. “It affected a lot of people who go do their homework over there or relax there. […] It kind of sent us back a little bit.”

Despite the PUB not being completed yet, Vargas prefers that EWU “take their time” and make sure everything’s all safe for everyone.

EWU sophomore Kaylah Hogle spent time in the PUB during the preview hours. Hogle was hopeful that the PUB would remain open after the preview event, but found out about its delay through social media.

“I understand that it’s very hard to build but I was really hoping for it to be open today,” Hogle said. “Just so we could start to use it because I might not be here next year. But overall I’m happy that it will be done by winter.”

According to the student assistant to the PUB director Riley Baxter, the decision for the PUB opening delay was based upon the accessibility of the building, and that it was a last minute decision. Though Baxter described it as the “best decision possible” because PUB leadership wanted something that’s suitable enough to fully meet the needs of students.

All three floors of the building were open for exploration.

Students also got the chance to taste free food samples at Panda Express, the Union Market and Global Cuisine. Attendees toured the building, visiting the new Pride Center, the Multicultural Center, a game room, the ASEWU offices, the Technology Center and the Career Center.

“I really enjoy the positive energy about what we’re doing here,”Baxter said. “Everyone seems to be really excited about the atmosphere we have and I just love the fact that everyone was finally being able to come in and explore our facility.”

EWU senior and Pride Center employee Mike Manning has been waiting for the PUB to open since it went under construction during December 2016 and remembers when it first started showing up on tuition. He is looking forward to working in the PUB rather than Showalter.

“It definitely will be a game changer in having a central location for people to come and hang out when there’s not class going on,” Manning said. “I was a student here when the old PUB was open and it was definitely nice to have somewhere with ample sitting locations and a place with lots of services.”Updates and information on the PUB can be found at http://sites.ewu.edu/pub/.