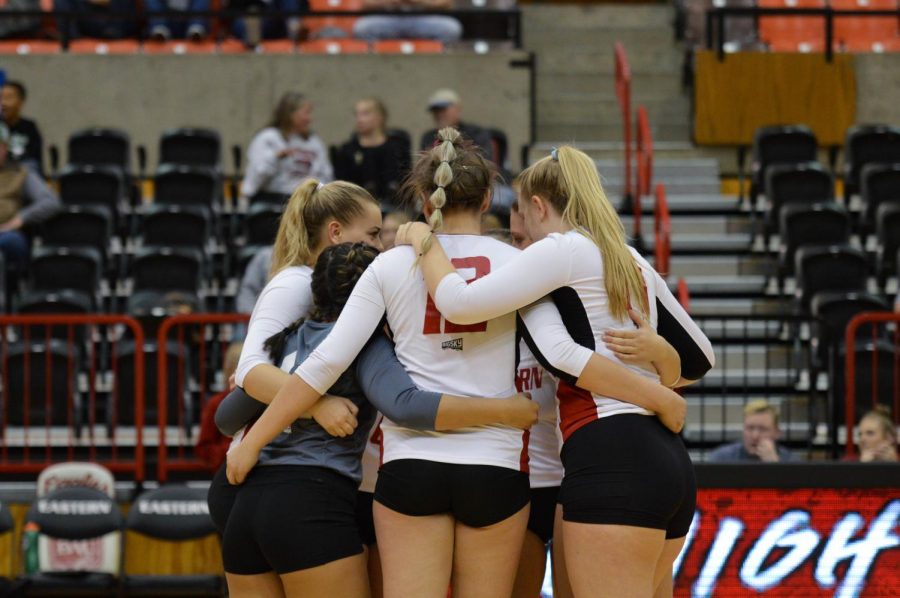 The Eagles huddle up after a point. EWU lost three straight sets after winning the first to lose to Northern Colorado on Oct. 20.

EWU started the match strong, winning the first set 25-20. UNC then rallied to win three straight sets and get out of Cheney with the victory.

“Northern Colorado is a really good team,” EWU head coach Leslie Flores-Cloud said after the game. “They came back and started serving us a little tougher. It’s a game of cat-and-mouse, and they were the better serving and passing team tonight.”

Despite the loss, Flores-Cloud saw positives in the performance, noting the many injuries the Eagles are dealing with.

“I think the team plays with a lot of heart,” Flores-Cloud said. “Even in the last set, we are down a lot of players and the fight of [EWU] was remarkable. Up until the last point we [were] fighting.”

Freshman Kennedy Kaminsky returned from a three-game absence to lead EWU in kills with ten and blocks with four. Junior Kahle Elliott added seven kills and three blocks. Freshman Grace Nelson and sophomore Puaoolelagi Sao led the Eagles in digs with 15, while junior Samantha Boever led in assists with 23 and added 12 digs.

Saturday brought the first of a three game homestand for EWU. The Eagles will host Weber State on Oct. 25 at 7:05 p.m. and Idaho State on Oct. 26 at 6:05 p.m. Both games will be held at Reese Court, and admission is free.