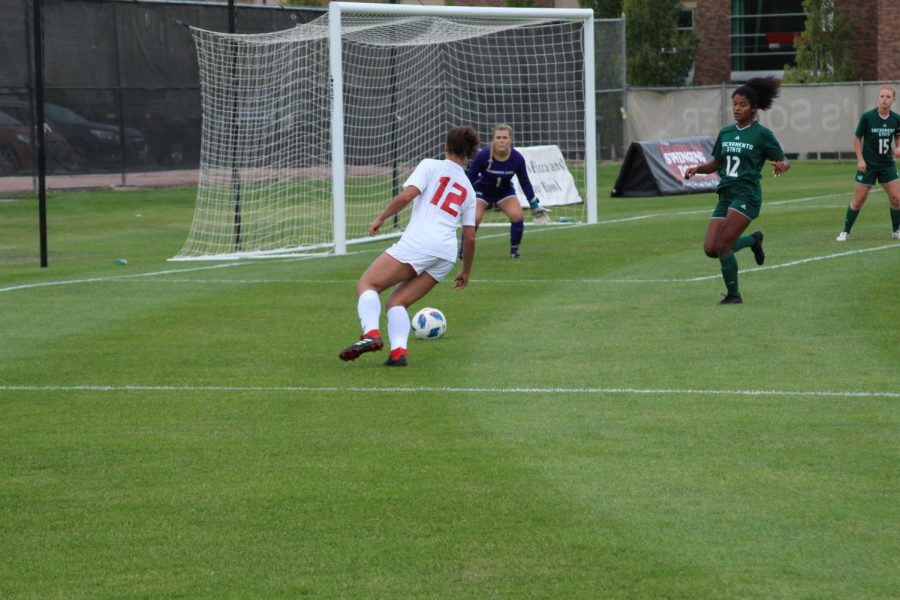 In soccer you can outplay your opponent on both ends of the field, but if you can’t get the ball in the net, you can still lose.

The EWU soccer team opened Big Sky Conference play against Sacramento State on Friday. The Eagles led in shots (15-11), shots on goal (8-7) and played the majority of the game in the Hornets’ defensive half of the field, but Sac State was able to escape with a 1-0 victory.

Scoring has been a problem for the Eagles this season, despite creating several scoring opportunities. They entered the game leading the BSC in shots with 15.89 per game, yet, they are now averaging 0.8 goals-per-game.

“We aren’t good enough right now, and we have to be better,” EWU head coach Chad Bodner said. “It’s one of those things where we’re in their half for most of the game, but we can’t create anything going forward.”

The game was the second time in a row, and the fifth time all season, that the Eagles have been shutout. In comparison, they were only shut out four times last season. The Eagles haven’t scored a goal since their 2-0 victory against Utah State on September 14. EWU has now gone 224 minutes without a goal over the last three games.

The play of the backline and goalkeeper Kelsee Winston were the highpoints for the Eagles once again.

Winston’s first two saves came in the first half. First, she made a diving, two-handed save where she ended up on the ground. Later, she leaped and reached with her right hand to knock the ball away from the upper corner of the goal. She finished with six saves.

The defense continued to hold strong, but cracked in the 73rd minute, allowing a rebound goal from Sac State’s Skylar Littlefield.

“I thought the backline had a good game,” Bodnar said. “Other than the bobble at the end, I thought it was a pretty solid backline for us… You can’t depend on our backline to get a shutout every game. Again, it’s our attacking third and finishing the chances that we have. We had a solid four chances in the first thirty minutes.”

The Eagles are 0-1 in BSC play, and 4-4-2 overall. Next, EWU takes on Portland State on Sunday at 1 p.m. at the EWU soccer fields. Admission is free.