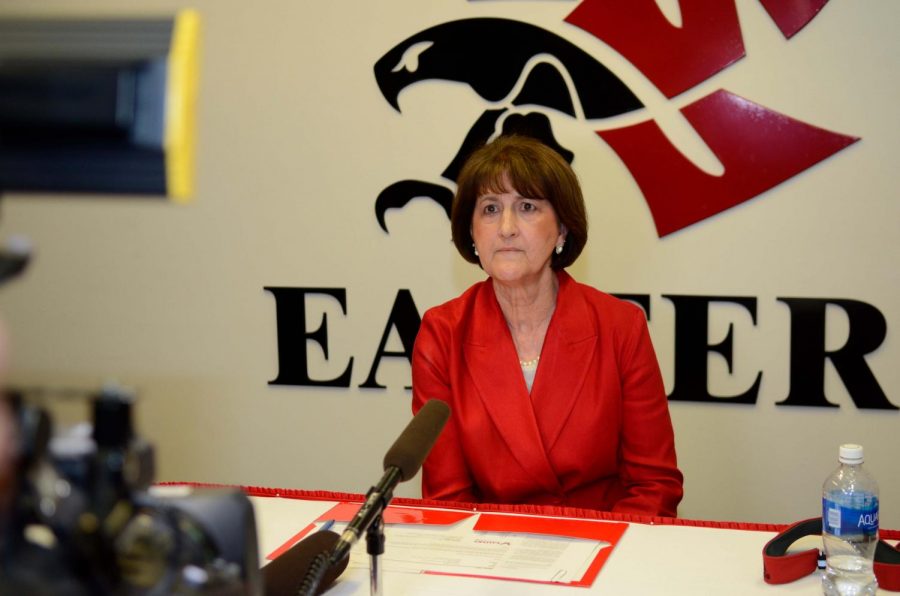 Athletic Director Lynn Hickey during her introductory press conference on April 25. Hickey is focused on pinpointing and solving problems in the athletic department at this point in her tenure | Photo courtesy of EWU

EWU Athletic Director Lynn Hickey has spent six weeks in her permanent position. In her first week she filled staff vacancies for the associate head soccer coach and the Senior Associate Athletic Director for External Affairs, and scheduled the football home opener against Central Washington University on September 1.

Since then, Hickey has been busy with external activities from the Alumni Awards Dinner to the EWU Tri-Cities Celebration. She is also reviewing aspects of the athletic department and filling the remaining vacancies in the staff.

“It’s been a lot of fun,” Hickey told The Easterner in a phone interview. “I think when you move from an interim position to the full time, the responsibility that you bear feels a little bit different. And then there’s just a lot to do.”

Hickey said that the department expects to make an offer for the new cross-country head coach in the next week or two, and that they are getting ready to bring in candidates for the volleyball position in the coming week. She said that Pam Parks’ retirement from the senior women’s administrator position will be the only hire behind schedule, and may take until the second week of July to fill.

Hickey’s other primary focus for the summer is to review how people interact with EWU athletics, including fans, donors and students alike. At venues she wants to learn how people are parking, sitting, tailgating and experiencing the game. She wants to know how donors look at the university, and how well student-athletes are accommodated by their facilities and operational procedures.

“We just want to have everything laid out, everything comfortable,” said Hickey. “And then this first year we’ll really take time to review how things go and see if there are some new initiatives that we want to put in place, but I need to see a season. I’ve heard great things about how people like to come in and tailgate and I just need to kind of view it before we make any major, drastic changes.”

At this point in her tenure, Hickey is most focused on finding and solving problems within the athletic department. She is going to need more time before she moves forward with any long-term plans.

A message from Lynn Hickey: “If there are any students, faculty or staff that really want to reach out to me with suggestions on how we can be better engaged, on how we can better accommodate our fans at events, I would love to hear from our campus family […] I invite people to contact me and I would rather have a lot of calls and a lot of conversations. I don’t want apathy. We don’t need apathy. We need to really get engaged and communicate with each other. And even if there’s some tough discussions and some tough decisions to make — we want to hit those head on […] We don’t have an athletic department for the athletic department. We are truly the university’s teams and we want to do the best job we can not only in competing on the fields and the courts and doing well in the classroom, but just really being engaged and for campus community to really feel a part of things. […] We would love for people to reach out to us with any thoughts.”