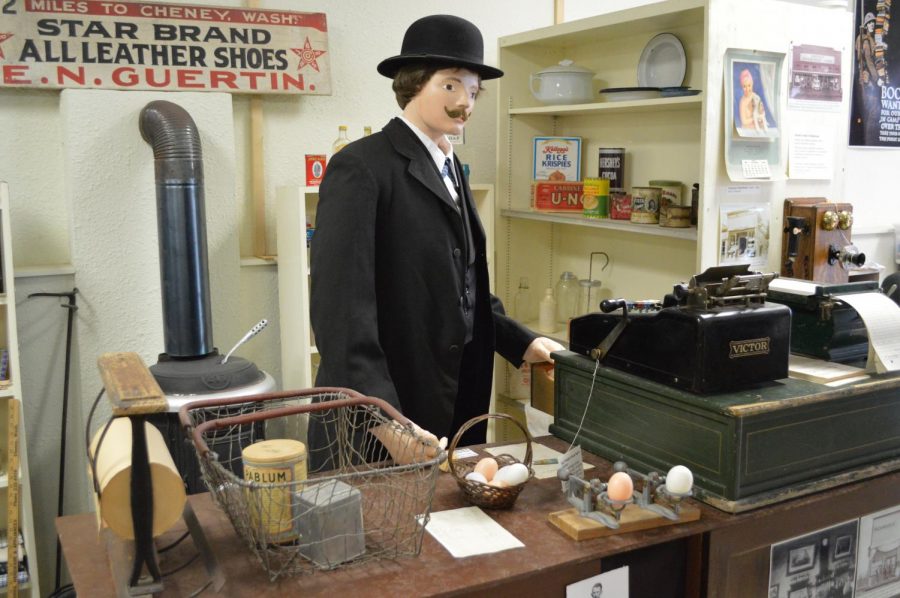 An exhibit at the Cheney Historical Museum. The museum highlights Cheney and the surrounding areas including Marshal, Tyler, Amber and Four Lakes | Bailey Monteith for The Easterner

The Cheney Historical Museum is continuing to evolve as the town of Cheney becomes more transient while maintaining its historical values.

The museum was started by the Tilicum club, a social and service organization formed by a group of women established in 1903. The organization would host pioneer teas once a year with the original pioneers, while another group of women called the Civil War Veteran Organization gave some of their items to hold onto as Civil War veterans were dying out. The Tilicum club would take the combined artifacts and show them to schools. Over time, the collection grew into the museum that resides in downtown Cheney today.

Over the years the museum has been in a number of different locations around Cheney. Joan Mamanakis, co-director of the museum, is a Cheney local who has been volunteering with the museum for about 13 years. Mamanakis believes the current location of the museum is “the best location it’s ever been in.” Before this location, the museum was in the Wren Pierson building until a natural disaster forced the museum to relocate.

“The building at Wren Pierson […] looked a little different than it does now, but we had a really big snow year in 2008 and the roof collapsed,” Mamanakis said. “All of that coming down caused some fractures in the building and they thought the building might collapse. They evacuated everyone out the building and we went into storage. We said, ‘oh this would be terrible for all of the old artifacts to be in a unheated storage unit’ so we desperately were looking around.”

The museum highlights Cheney and the surrounding areas including Marshall, Tyler, Amber and Four Lakes. These were all fully functioning towns before the evolution of transportation, with their own schools, hotels and businesses. During that time Cheney was essentially the hub.

All of the artifacts within the museum are donated by the families who have lived in Cheney. For a long time the museum served as place for people who knew the history or who had family members in the town. Since Cheney has changed, the museum had to change with it and adapt to a community that isn’t as familiar with the history of the town.

“That’s been one of the evolutions for me is kind of recognizing that with a population turnover, that I am speaking to a different audience,” Mamanakis said. “I mean there’s still people that come to visit and their families were here or are still living here, and there are certain things in the museum that we don’t switch out because the families come out and they want to see those objects again.”

The museum runs completely on volunteer power and Mamanakis describes the current state of volunteership as “a little scary” because sometimes there aren’t enough for them to be sure whether they have enough volunteer power to keep the doors open or not. The ideal amount of volunteers the museum could use is about 30 to 35 people, so that volunteers would only have to participate about once a month.

“You don’t need to know a whole lot about history,” Mamanakis said. “It’s mostly saying hello to people and talking to them, and if kids come in then showing them how the phonograph works. Also, you’ve got a whole museum to learn about history if you are interested.”

The museum is open from May through September on Thursdays, Fridays and Saturdays from 11 a.m. to 3 p.m. From October through April, it is open on just Friday from 11 a.m. to 3 p.m. If anyone would like  to request to see the museum during off times, they are welcome to call and schedule a showing. The museum operates entirely through donations, and donations can be made on the Cheney Historical Museum website or at the museum.