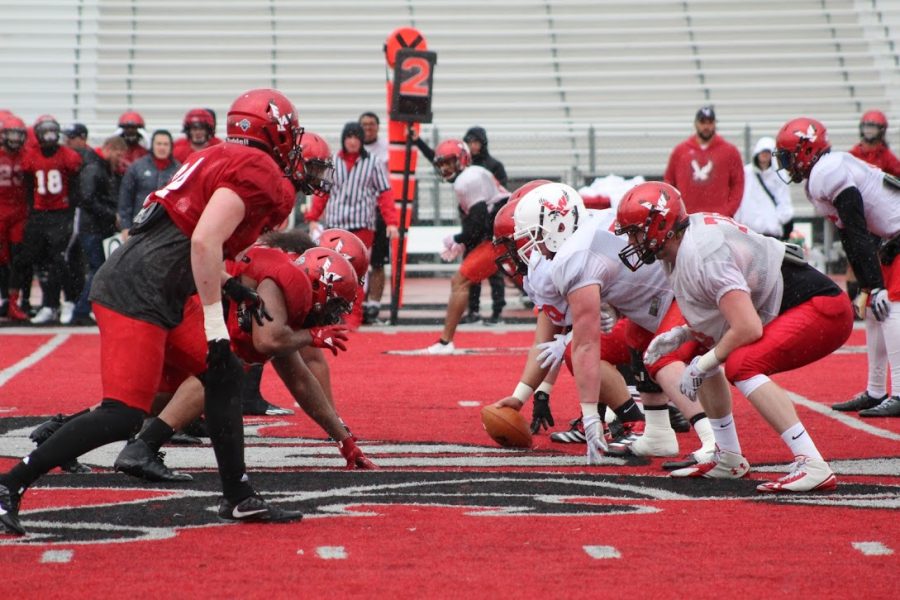 The EWU football team lines up during its first full scrimmage on April 13. The Eagles had 398 total yards of offense, seven pass breakups and two interceptions in the friendly matchup. | Mckenzie Ford for The Easterner

After two weeks of drills, which included a handful of practices and a short 30-play scrimmage, the EWU football team went through its first full scrimmage of the spring on April 13.

The 70-play session took place at Roos Field in rainy conditions with both sides of the ball making highlights. Despite being held scoreless on its first eight drives of the day, the Eagle offense was able to muster 398 total yards. The defense, meanwhile, had seven pass break ups and two interceptions in the endzone.

“A lot of guys took reps, and there was some really good football and some not so good football,” second-year head coach Aaron Best said following the scrimmage. “On one side you’re excited about red zone turnovers on defense, and on the other side you’re cringing as an offensive coach.”

Senior quarterback Gage Gubrud, who was the starter the past two seasons, was 4-of-12 passing for 101 yards and two interceptions while splitting reps with sophomore Eric Barriere and redshirt freshman Gunner Talkington. Gubrud also had 19 rushing yards and a 5-yard touchdown run that capped off a six-play, 60-yard scoring drive.

Barriere, meanwhile, finished 10-of-17 passing for 145 yards and a touchdown while rushing for another 32 yards. He led the Eagles on scoring drives of 74 and 82 yards, the first of which ended in a touchdown pass to senior wide receiver Terence Grady.

Grady, who missed most of 2017-18 with an injury, said the Eagles’ offense is a step ahead of where it was at this time last year.

“We have a lot of vets on offense,” said Grady. “Last year we only had one senior on offense. We have some guys that are stepping into leadership roles this year and I think that it’s showing with how our offense is looking.”

Grady had four catches for 73 yards on the day, while junior running back Dennis Merritt scored two rushing touchdowns on 18 yards. On the defensive side, sophomore safety Calin Criner had two interceptions and eight tackles. Junior safety Dehonta Hayes led the team with nine tackles.

“In pockets you feel like there’s a vibe, there’s kind of a huge pulse going on,” said Best. “And then at times we kind of lull […] Those 28 seniors have spent a lot of energy their first four years. And so it’s time for those first, second, third and fourth year guys to kind of expend some of their energy.”

Over the next two weeks, the Eagles will have five more practices, in addition to a scrimmage at 11:30 a.m. on April 21. EWU will close out spring football with the Red-White game at 2 p.m. on April 28.