Eduardo Chavez explores his roots and finds himself in “Hailing Cesar” 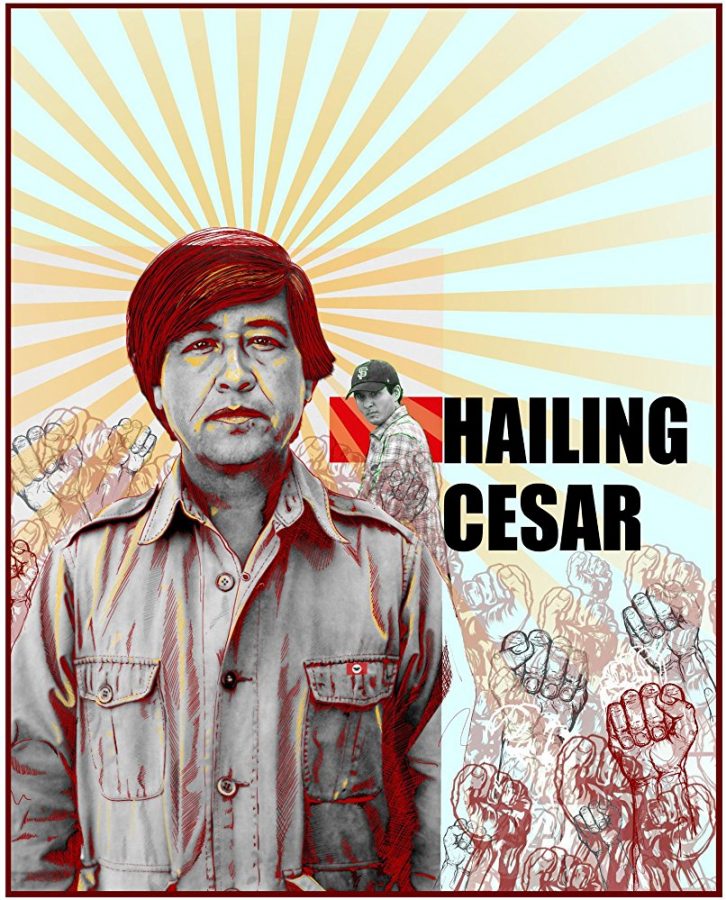 The movie poster for "Hailing Cesar." The filmmaker, Eduardo Chavez grandson of Cesar Chavez, made this film to explore his roots | Photo courtesy of IMDB

Eduardo Chavez took his curious endeavor of discovering his family’s past to the screen in his documentary “Hailing Cesar” presented at the JFK Library March 5.

Growing up, Chavez inherited the benefits of his father and grandfather’s hard work and successes. However, Chavez was always left with a void that longed for the true story of how it all came to be.

“My grandfather passed away when I was a year old and my father didn’t really tell me much about him growing up,” Chavez said. “I thought [the documentary] was a great opportunity where I could take it upon myself to learn about my family’s history and to learn about my roots.”

Chavez initially knew as much about his grandfather as would a random passerby on the streets of his hometown in Los Angeles.

To the Mexican-American community of California, Chavez’s grandfather, Cesar Chavez, is considered a legendary Ghandian.

Cesar Chavez was an immigrant farmworker in the 1960s who protested and fought for the movement that would win rights for many other underpaid-and-overworked immigrants like him.

“I knew he was successful in organizing farmworkers, I knew he had a lot of fame and he had a lot of power in bringing people together,” said Chavez. “Really it was just his relentless pursuit of getting his farmworkers rights and getting them to be treated like human beings.”

Chavez’s father, Fernando Chavez, labored with his own father in the fields as a young child for $1 an hour. He, however, broke away from the farm life later on attending UCLA to become a lawyer. Chavez was eventually able to provide a comfortable life for his family in the Bay Area, but the well-off lifestyle had the one downside of masking his rough history from his children.

In the pursuit to uncover this history, Chavez started formulating ideas for the documentary upon meeting Sirous Thampi in an acting class, who ended up producing the film.

The process of the documentary’s creation lasted over a span of about a year and a half. One month of preparation, one month of filming and a year of editing which was broken up by occasional breaks to fundraise.

The film for the most part was set in the fields of Sonoma, California, where Chavez spent a month grinding through backbreaking 10-hour days alongside Sonoma’s hardworking grape-pickers.

Chavez was able to realize first-hand what his grandfather and father went through to give him the privileged life he had in his childhood, and the barriers his grandfather overcame to give better conditions to his fellow farmworkers.

“It was the most amazing thing how someone could sacrifice so much and benefit the lives of so many people,” Chavez said in regards to his grandfather.

The film’s presentation on Monday received positive reactions from viewers, as shown in the question-and-answer session that followed.

Sarahi Gutierrez, M.E.Ch.A co-chair and organizer for the event, said the film could resonate with a lot of EWU’s student population given that many of them come from families of immigrant and/or agricultural working backgrounds.

“I come from a town with big agriculture, so this movie really spoke to me,” Gutierrez said. “It’s hard for people whose parents have two jobs and are always away from home.”

Chavez’s film showings are not just limited to EWU. He plans to tour around colleges as far as Michigan and Washington D.C. to spread his grandfather’s legacy.

“My grandfather’s message today is still a relevant message of compassion, nonviolence, sacrificing yourself for a better cause,” Chavez said.

Chavez came out of his filming experience a changed person, and he hopes for the same for his audiences.

“The main thing that I hope people will take away from this is it is so important to know where we come from and know what our families did in the past—the sacrifices they made. I think it’s a very universal message in exploring your roots,” Chavez said.