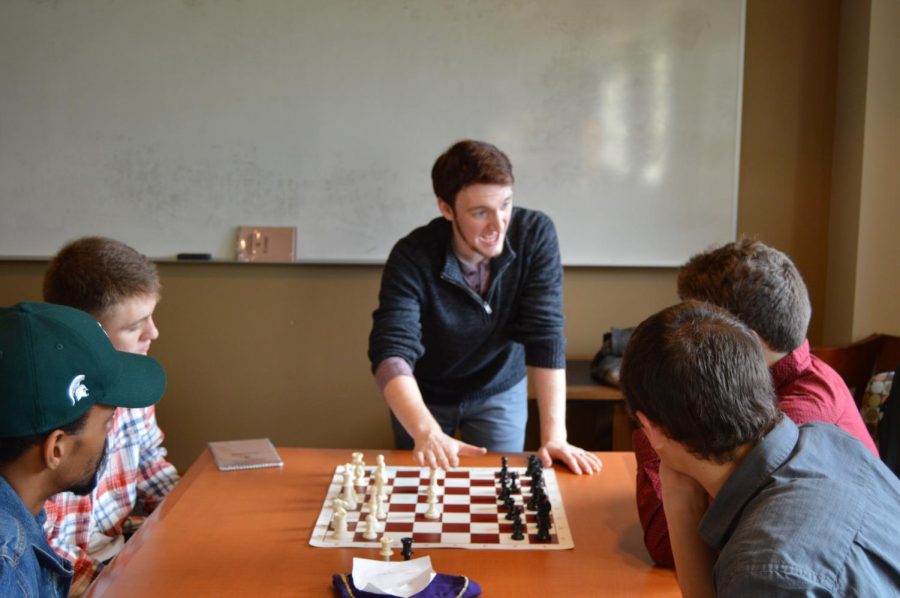 Chess club president Raymond Shiner, a licensed chess coach, provides instruction to new players during a Friday meeting. The chess club has drop-in play on Fridays at noon | Jeremy Burnham for The Easterner

Senior Raymond Shiner grew up playing chess. When he came to EWU, he expected to find a chess club on campus. It was an expectation that would not be met.

“Chess is a staple at most universities,” said Shiner. “When I got here, I was looking around for a chess club and there wasn’t one.”

After a philosophy class meeting that Shiner was a teacher assistant in, Shiner and some of the students started discussing chess. They decided EWU needed a club. Junior Shayara Mathias who joined Shiner early on, said she was looking for a new game to get involved in.

“I wanted to come into a game that had some structure and some strategy behind it,” said Mathias, the club’s vice president. “I joined chess club to grow my mind a little bit.”

Shiner hopes the club is an enjoyable experience for all attendees, regardless of their experience levels.

“It’s a wonderful game,” said Shiner. “It’s the world’s best strategy game. The rewards are great if you take the time to learn it.”

Junior Isis Tilton was completely new to the game when she joined. She said everyone was very supportive of her as a new player, and that she has grown a lot as a player due to her experiences with the club.

“Not only do I get to learn from people who have more experience, I also have people to practice with,” said Tilton. “Everyone is so supportive, and that has helped a lot too. I have come a long way because of this club and the people in it.”

The club grew from just a couple of players to over a dozen. Shiner set up a Facebook page for the club and two members have found the club through that page.

“We haven’t even advertised the Facebook [page] yet,” said Shiner. “We haven’t even really updated it. They had to search ‘EWU chess club’ to find us. That’s how interested in chess they were.”

Shiner hopes to attract players who are new to the game. To that end, he has become a licensed chess coach through the Inland Chess Academy in Spokane.

Because Shiner knows that students are busy, the club meets multiple times a week. The hope is that people who want to join will be able to fit at least one of the meetings into their schedule. For the people who attend every meeting, each day has a different theme.

One of the features of the Thursday night meeting is speed chess. A variation of speed chess is the “Bullet Game,” in which players have only one minute each to complete a whole game.