Bene’s brings benedicts to another level 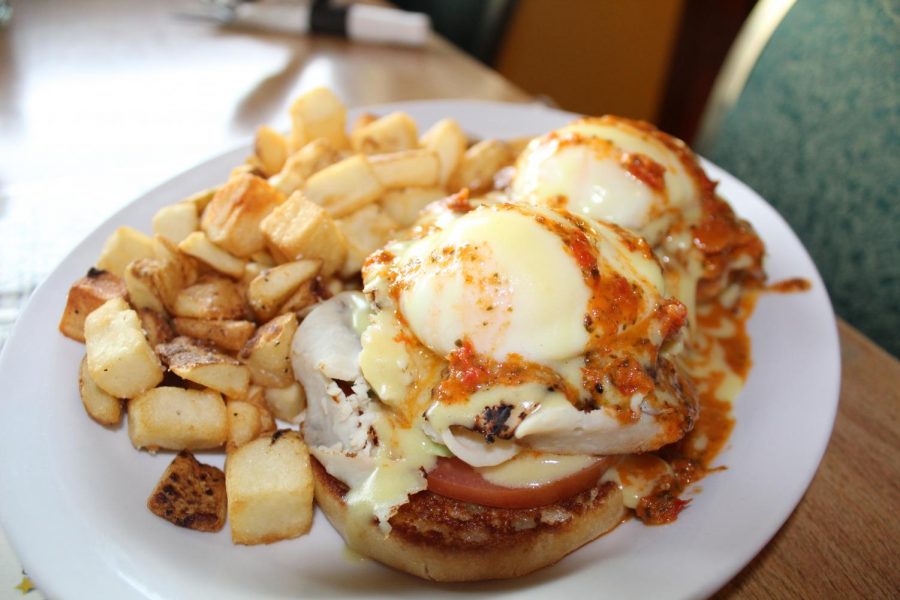 Cheney’s newest restaurant, Bene’s, puts their own twist on traditional breakfasts and lunches.

The main star of Bene’s, which opened in September 2017, is the eggs Benedict on the breakfast menu. Bene’s doesn’t just offer a traditional eggs Benedict, they serve 11 different variations of the dish.

Married owners Derek and Alexx Baziotis purchased the building that formerly housed Top of the Line Seafood and Burgers in August and opened Bene’s one month later. Alexx runs the front of the house, while her husband, Derek, runs the back of the house.

Alexx started in the restaurant business over a decade ago, but Derek said he was practically raised in restaurants.

“My parents owned a breakfast and lunch restaurant in Spokane,” said Derek. “They met at a restaurant and married, so we were basically raised in a restaurant.”

The idea of Bene’s is something Derek had been working on for years.

“I was in the Navy for four years, and when I got out I ran Kalico Kitchen for eight years. When I was working there I thought of the concept and started working on a business plan,” Derek said.

Kalico Kitchen is a popular Spokane breakfast and lunch restaurant, close to Gonzaga University and is owned by Derek’s family.

“At that point, it was basically location, that’s all we needed,” said Derek. “Once we found a good location, we were off.”

“It kind of fell into place,” Alexx said.

The Baziotis had previously passed up on the 1st Street building before.

“I actually came in and looked at this place when it was Perry Street Cafe,” said Derek. “It was pretty bad in here, so I passed on it.”

Last year, while browsing Craigslist, Derek once again saw the building for sale.

“The last people here did a lot of work. It made our decision to look into it,” Alexx said, referencing the large-scale remodel that the previous owners had done.

“I came in and looked at it and was like, ‘This is perfect.’ Perfect size, perfect everything,” Derek said.

Ultimately, the Baziotis decided to keep the restaurant to breakfast and lunch service only, omitting dinner.

Derek said that dinners are just too difficult to succeed in. His main reasoning is that there’s just too much competition. When places like Outback Steakhouse can sell a steak for $5 and profit, it’s hard for smaller businesses to compete.

Derek’s personal philosophy is ‘Do what you’re good at. Don’t overextend. Don’t do anything stupid.’ It’s this philosophy that inspired the simplicity of Bene’s.

“The concept, it’s eggs Benedict, so that’s what we want to focus on and stay consistent with,” Derek said.

“I was working at Kalico in the back of the house and it seemed like every ticket had an eggs Benedict on it. Every single one,” said Derek. “People were ordering this thing left and right, how cool would it be to completely mash them up, make a bunch of different ones?”

Derek spent the next five years coming up with his recipes, for Benedicts and other items.

“There was a lot more we wanted to do but with the size of our kitchen I had to trim the menu almost in half,” said Derek. “We had pancakes and omelettes and all that and we kind of went back to the kitchen and I thought, ‘Yeah, that’s not going to happen. Not with one grill and the size of it.’”

All of the sauces used for the Benedicts are made in-house, as well as the waffles and the soups.

The Baziotis try to work with local businesses as much as they can. They use Craven’s Coffee, a local Spokane roaster, and Spiceology, a spice company located in Spokane. The Baziotis said they looked into farm-fresh eggs, but found that they couldn’t supply as many eggs as the restaurant went through in a day. The couple estimated that they use 200 eggs in a single day.

According to the Baziotis, the Benedicts are easily the restaurant’s most popular items. But neither could agree on exactly which benedict sold the best.

“Probably the California, or the Country,” Alexx said.

“We also sell a lot of the Chorizo, and the Fireman,” Derek said.

Alexx said her favorite item was the Chorizo Benedict, while Derek said his favorite was the breakfast burrito.

Ironically, Derek discovered he had an egg intolerance only a few years ago, but continued on with the eggs Benedict theme for Bene’s.

“Everyone else loves eggs,” Alexx said.

Currently, Bene’s offers a handful of selections for vegetarians, but no vegan or gluten-free options yet. The Baziotis said that they’re working on coming up with a gluten-free menu, but for now, they’re more than willing to work around customers’ dietary needs.

Bene’s has received massive amounts of acclaim, with over 100 positive reviews on Google and Facebook, and even an article in the Spokesman Review.

Derek said while he knew the restaurant would be successful, he didn’t anticipate how quickly it would take off.

“In the back of my mind, I thought, this was going to be a hit, everything was going to run smoothly, it’s going to be perfect, and we’re going to have a line out the door, said Derek. “I knew there was a void to be filled and that we could come in and do it with our food and our service, I had no doubt about that.”

“Our goal is to have multiple locations in and around college towns,” Derek Baziotis said. “I love this, I think it’s easy to manage, and I think the people are awesome. But I’m never leaving this location.”

Bene’s is located at 24 W 1st St, and is open from 6 a.m. to 2 p.m. They offer an early bird menu with special discounted pricing for several items from 6 to 8 a.m.