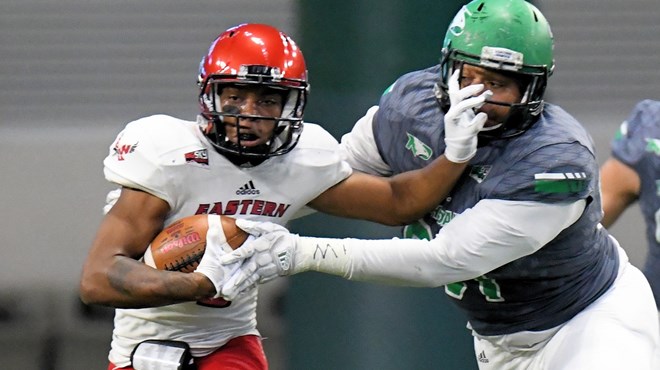 Redshirt freshman Eric Barriere stiff arms a North Dakota defender during the team's 21-14 victory on Nov. 11. He was 13-of-23 passing for 130 yards and a touchdown, while adding 66 yards rushing. Photo courtesy of Russell Mons.

There is an old saying in competitive sports: “A win is a win.” No matter how the team gets the job done, as long as they end up in the left side of the win-loss column the game can be deemed a success.

This assertion rings especially true for the EWU football team, as they faced a demanding situation against the University of North Dakota on Saturday, Nov. 11. Not only were they fresh off back-to-back losses to Southern Utah and Weber State, but the Eagles were also without two starters. Junior quarterback Gage Gubrud and junior linebacker Kurt Calhoun were suspended for the UND game as a consequence of being arrested for obstructing a public servant the preceding weekend.

Redshirt freshman Eric Barriere had a solid outing in Gubrud’s place, and the team came out on top 21-14 in UND’s final game of the season. With the victory, EWU improves to 6-4 overall and 5-2 in Big Sky play. Here’s how it went down.

UND struck first, putting together an 11-play, 74-yard drive on their first possession, capped off by a seven-yard rush by senior quarterback Keaton Studsrud.

After going three-and-out on the opening drive, the Eagles answered back with a touchdown. Junior running back Sam McPherson had a 21-yard run, which Barriere followed up with a 20-yard rush of his own. McPherson ran for 14 more yards, then sophomore running back Antoine Custer Jr. bullied his way for 16 yards to the North Dakota one-yard line.

McPherson put the finishing touches on his massive drive by throwing the ensuing touchdown to redshirt freshman tight end Talolo Limu-Jones. This was the running back’s second passing touchdown of the season, after throwing a 43-yard touchdown to Gubrud in the Eagles’ 52-31 win over Sacramento State earlier this season. McPherson’s touchdown made it 7-7, which was the score after one quarter.

On the Eagles’ next possession, Barriere’s elusiveness was on full display as the quarterback escaped pressure multiple times. This was most evident on second down at UND’s 30-yard line.

The Fighting Hawks brought pressure, sending a blitz Barriere’s way. Barriere spun to his left, ran back to the 45-yard line until he found his legs, then burst forward and flipped a shovel pass to McPherson for 15 yards. However, the possession stalled and senior kicker Roldan Alcobendas missed the resulting 31-yard field goal.

After a UND punt, the surging EWU offense took over, and so did the running back core. First, McPherson had a 17-yard run to bring the team near midfield. Then, Barriere hit Custer with a 16-yard pass, which the running back followed up with a 16-yard rush to the Fighting Hawks’ 14-yard line. That is when McPherson caught a pass from Barriere at the line of scrimmage, spun around one defender, made a couple more miss and barreled in for the touchdown.

With 8:29 left in the half, the Eagles led 14-7, as Barriere picked up his first collegiate passing touchdown.

UND was forced to punt two more times before halftime. After scoring on their first possession, the Fighting Hawks punted the next four times they had the ball. The Eagles got the ball back with 2:55 remaining in the first half. A few positive plays had the offense approaching midfield.

Then, on second down, McPherson burst up the middle for a 55-yard rush and was brought down at the one-yard line. The junior running back, however, stayed down with an apparent left ankle injury. He was helped off the field, and was ruled out for the rest of the game.

Barriere ran on first-and-goal, but was stopped short. An incomplete pass, followed by another failed rushing attempt brought up fourth down as the clock ticked down in the half. EWU head coach Aaron Best let the clock run down to two seconds, and it appeared the team would kick a field goal. But the coaching staff decided to go for it, and the risk paid off. Barriere kept it himself on a quarterback option, and picked up the one-yard rushing touchdown as time expired.

The second half was much more of a defensive battle. Both teams opened up the frame with a pair of punts before either side was able to get anything going. On the Fighting Hawks’ ensuing possession, the team was nearing the Eagles’ red zone, but went for it on fourth down and did not convert.

Alcobendas’ 37-yard field goal was blocked on the next drive, and UND took over with beneficial field position. They took advantage with a trio of completions that had the team on the doorstep, threatening at the EWU 13-yard line. On second down, UND senior wide receiver Stetson Carr caught the pass, and as he approached the end zone, he dove towards the goal line, where he should have cut the deficit. Senior cornerback Nzuzi Webster, however, was able to jar the ball loose and the Eagle recovered the fumble.

After a scoreless third quarter, the Fighting Hawks were able to muster a touchdown in the fourth, but it was too late. The Eagles had a bit of a scare, as Barriere lost the ball in EWU territory, but was able to jump on it himself. On the following punt, junior punter Jordan Dascalo pinned UND at the three-yard line. The defense held tough from there, and the Eagles were able to run out the clock.

The Eagles held UND to seven points in both halves, while the offense did enough in the first frame to come away with the victory.

Gubrud will be back under center for the Eagles next week, but the future sure seems bright with Barriere in waiting. The redshirt freshman finished the game 13-of-23 passing for 130 yards and a touchdown, while adding 66 yards rushing. The youngster’s mature performance was not lost on Best.

“He has an uncanny ability to stay even-keel in the heat of the moment,” said Best. “He was a grinder today. It didn’t all work out perfect, but he’s electric when the ball is in his hands.”

More importantly, Barriere didn’t turn the ball over, while the defense was able to pick up two turnovers in the second half.

EWU still faces an uphill battle at securing an FCS playoff berth, but for now, the team will control what they can control. The Eagles wrap up their regular season with a home game next week against Portland State at 3:05 p.m.