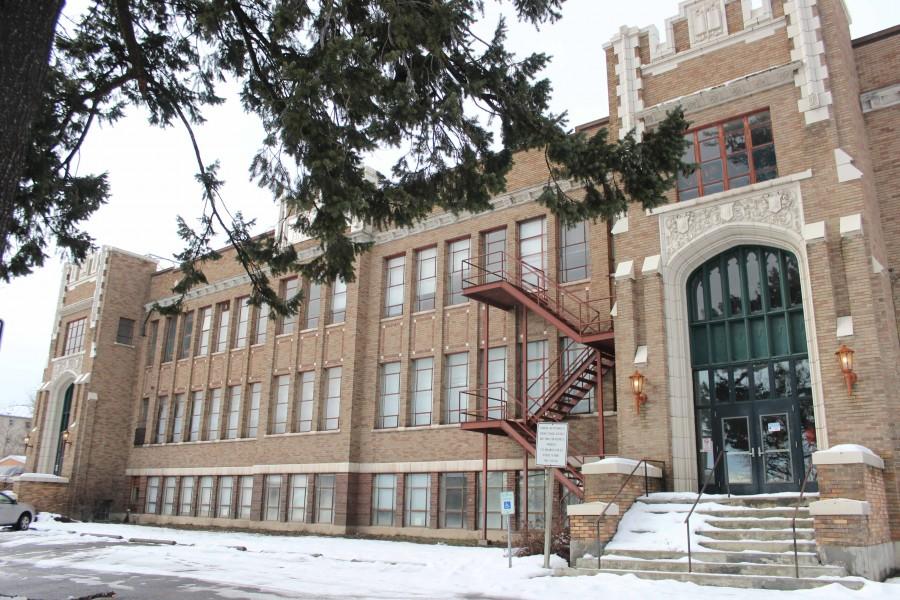 The Fisher Building as seen from Fourth Street

David Hall and Matt Roberts are two self-proclaimed “idiots [who] want to save Cheney from itself,” and they hope to do it with the help of a school.

Across the street from Showalter Hall on the corner of Fourth and D streets is a large brick structure that once served as Cheney’s public high school. Nestled between the Veteran’s Memorial Park and a Greek fraternity house, the Fisher Building has languished on the property market for several years as the price has dropped from the original appraised value of $1.05 million to $750,000.

There have been some interested potential buyers and developers, but closing a sale has proved difficult as the approximately 87-year-old building proposes a series of major structural challenges, some of which include a concrete foundation that extends to the second story, old electrical work, clumsy add-ons and adherence to building codes as old as the building itself.

In March 2015, the Cheney School Board tabled at least one sale proposal that community members believed posed a threat to the building’s architectural preservation; it would have turned the Fisher Building into student housing.

“It would be cheaper to tear down the building and build a whole new apartment building,” said Roberts, a realtor and developer who currently designs loft spaces in the Spokane area.

“It’s got problem after problem after problem as far as anyone doing anything with it,” said Hall, owner of Rokko’s Teriyaki and BBQ in downtown Cheney. “It’s probably worth more as a vacant lot because you could rebuild at a quarter of the price of what it would take to get this building up to code.”

Roberts and Hall, however, have no intention of turning the antique building into modern rubble. While they envision creating a housing community of hip, quality loft apartments, Hall said they want to preserve the Fisher Building’s unique features, such as the old-style 300-seat theater, which Hall suggested could be another university resource or be converted into an alternative movie theatre á la Magic Lantern.

“I envision a mixed-use situation,” Hall said, referencing a project by McMenamins — a Portland-based hotel and restaurant company known for its heritage-friendly conversions of historic buildings — that aims to transform an 85-year-old high school in Bothell, Washington.

“This could be the coolest housing in Washington state for students,” said Roberts. “But to save the nostalgia and beautifulness … is going to take the money, and in order to get the money, we’re going to need people who are interested.”

Hall and Roberts presently lack the funding necessary for all their plans and ideas — an alternative movie theatre, a coffee shop with couches and wifi, a yoga studio and competitively priced student lofts, all while preserving the Fisher Building’s 1929 charm. Instead, the entrepreneurs hope by getting the word out they can drum up enough interest among potential tenants to entice financiers to take a risk on what they estimate will be a $6-7 million project.

“It’s architecturally pleasant, and we’re just trying to save it,” said Hall. “To get the financing is extremely hard, which is why it’s been sitting vacant. … We need participation from the city … because the building is to a 1929 code. They would have to work with us on modernizing it.”

Zoning also presents a problem, as the city counsel, which Roberts has already reached out to, would have to approve rezoning which would allow the Fisher Building to be remodeled into a building containing businesses and residential units.

“There is a shortage of good housing in Cheney,” Hall said, who criticized a rental market he claims is over-priced and filled with under-maintained properties.

“We’ve got a nice little community here. I don’t want to see it filled with every house that should be a single family house turned into a duplex, into a triplex, into a four-plex … due to lack of housing,” Hall said.

In contrast, Roberts and Hall describe a building containing up to 60 units of approximately 800 square feet, sporting 12-foot ceilings, exposed brick and original wood floors. “I think it would be great for faculty. … You know, if you’re a young faculty member that [just] moved to town,” Roberts said.

Hall added that the location made it ideal student housing and the inclusion of businesses such as coffee shops would provide campus-adjacent options to a population that has to seek the majority of its entertainment off campus.

For Hall, however, this is more than just a housing project. “It’s about making Cheney a place that people want to come,” he said, “Since I opened up [Rokko’s] there have been 17 business[es] go out of business in Cheney. Do you know how many have replaced that? Five. … If this place were anywhere else, it would be filled with little antique shops, and it would be filled with a sense of community. Things would be taken care of; it would be treasured.”

Hall and Roberts said they hope to provide a positive community experience through the Fisher Building project, but first they need the funding.