Good signs make up for poor chant at anti-assault rally 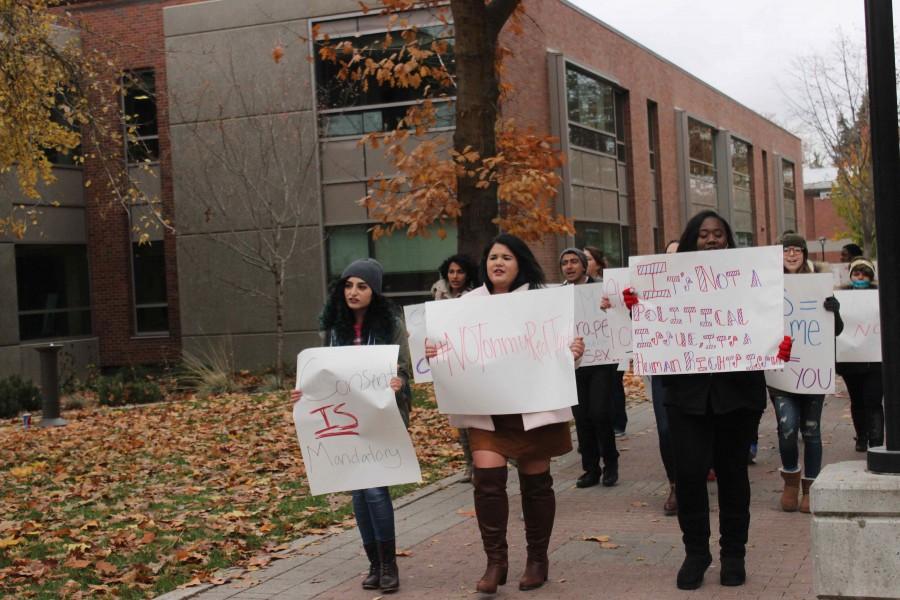 Awareness of sexual assaults has increased dramatically this year, not just by the campus police, but by students as well. With a rally held on Nov. 3, women and men were encouraged to bring or make signs showing their views on the “No Means No” campaign. The signs themselves hit home but when the chanting started the situation lost some clarity.

The message behind the chant and the signs was obvious; if someone says no, don’t continue, but the chant itself could have been formulated a little better.

Not to intentionally make a mockery of such a serious topic, but when girls chant, “Not on my red turf,” assault is not the first thing to come to mind.

Being the middle of the day, many people were in class. This might have also caused a lack of understanding from the chant as well.

Students in class couldn’t see signs being walked around the campus, but they could hear people shouting outside. If someone just heard that chant, they would have no idea what was being referred to. Maybe something like “real men don’t rape” would have been more effective, or just the classic “no means no” would have worked. Unfortunately, the actual choice in chant did not convey the sought after message.

This was obviously not the objective of the rally and thankfully the signs held strong messages that supported the true meaning behind it.

No means no, and with all the assaults being reported, it is clear that some people need this drilled into their heads. With protesters’ signs displaying things such as “Yes = F*** Me, No = F*** You” the message was clear.

Though the chant was poorly executed, the signs were what made the difference in the rally. Many people stopped and asked what the rally was about and then made signs themselves. Both men and women were participating in the rally. It was nice to see that seemingly targeted males knew and respected what these women were fighting for and didn’t take it personally.

With women and men cooperating to fight for a cause that greatly affects both genders, the rally overall went well. With many participants, it was clear there is an abundance of passion on campus toward this subject. Hopefully in the future that passion will lead to more such events and help create chants that are a little more transparent.