A Life to be Heard 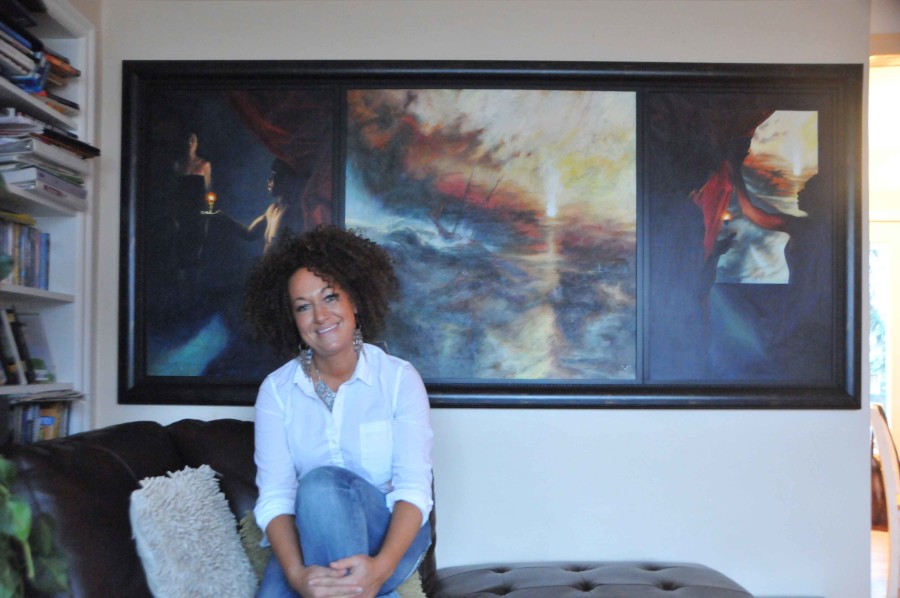 Rachel Dolezal, an EWU Professor, sits on a couch at her home in front of an original painting she created. Dolezal obtained her master's in fine arts at Howard University.

When I first walked up to Rachel Doležal’s bright red front door that stood out from the light beige home on South Hill, I felt nervous to have taken up this busy woman’s time to ask her about her life. I wasn’t sure if I was an inconvenience to her or if she would be really interested in sharing her story with a stranger.

She opened the door and looked at me with unexpected green eyes, a caramel skin complexion and a warm smile; I felt a relief from my nervousness and couldn’t help but smile back at her.

Doležal has many faces in Spokane County, including NAACP President, chairman for the Office of the Police Ombudsman — she participates in ride-alongs, observing both police and citizens’ behavior — advisor for Black Student Union at EWU and Africana Studies professor at EWU. She’s an activist wherever she steps foot, a columnist for the Inlander and a mother 24/7.

Yet these titles mean little to Doležal, she’s more concerned with the difference she can make in the positions they represent. “Some people think I’m really successful because I have titles, but I feel like my success is only measured in what work gets done,” she said.

Doležal welcomed me inside her little home full of sweet simplicity. Our voices echoed off the room’s hardwood floors. The walls were covered in abstract paintings I felt must have had a story behind the bristles that I could not wait to ask about.

She laughed as she excused the mess, though the mess was insignificant. Many books and papers were laid on her table and picture frames were on every surface showing her and a young boy; I could tell their relationship was sweet. She guided me to her black, leather couch where I sat across from this lively woman and began to ask her how she got to where she is today.

From the Montana tepee where she was born in 1977 to empowering the black community in Spokane today, Doležal has lived a life full of experiences “most people normally don’t have to go through.”

According to Doležal, “Jesus Christ” is the witness on her birth certificate. Her mother believed in living off the land; they lived in the middle of nowhere.

As a child, Doležal and her family hunted their food with bows and arrows.

From Montana, she, her mother, stepfather and three siblings moved to Colorado in 1992 for two years. From there, her family moved to Cape Town, South Africa, where her stepfather accepted a religious job opportunity.

“It’s a painful thing to talk about my childhood,” she paused as she looked down into her hands. “I kind of don’t talk about it much.”

Doležal has no contact today with her mother or stepfather due to a series of events that still haunt her thoughts today.

Doležal and her siblings were physically abused by her mother and stepfather. “They would punish us by skin complexion,” she said.

According to Doležal, the object her mother and stepfather used to punish them was called a baboon whip, used to ward baboons away in South Africa. These whips would leave scars behind, “they were pretty similar to what was used as whips during slavery.”

In 1996, she moved to Jackson, Mississippi, to pursue a four-year degree in art with a full ride scholarship.

She met her now ex-husband and afterward moved to Washington D.C. in 1999 where they married and where Doležal furthered her education in the fine arts at Howard University, graduating with a master’s degree.

During her time at Howard, her paintings sold quite well in convention centers around the nation, the highest for around $10,000.

As Doležal spoke about her artwork, I turned myself around on her couch to admire her large painting on the wall behind me.

“You can come sit over here, so you don’t have to twist your body around,” she laughed as I got up and sat next to her and we admired her painting together.

She named the painting, “The Return.” It was a large, horizontal painting with three different sections from left to right.

“It’s kind of a dialogue between cynicism and optimism,” she said. The painting’s first section on the far left showed a boy pulling back a curtain to reveal to a woman what chaos was going on outside.

The last frame showed the boy closing the curtain and trying to understand the optimism within the storm.

One of Doležal’s paintings was at a convention center in San Francisco, where her and a trusted mentor went out to dinner together to celebrate the sale. As soon as Doležal looked away, the mentor slipped gamma-hydroxybutyric acid, also called the “date-rape drug,” into her drink.

According to Doležal, her mentor took advantage of her that night. She said suing was nearly impossible due to the amount of wealth the man had.

“I can never trust anyone to bring me a drink again, you know, because it was a trusted person,” she said.

After graduating from Howard University, Doležal and her husband moved to Bonner’s Ferry, Idaho, where she gave birth to their baby boy named Franklin.

In 2003, her family moved to Coeur d’Alene, Idaho, where her relationship with her husband became unhealthy.

According to Doležal, her ex-husband was abusive to her and even their son. At two years old, little Franklin would intervene between Doležal and her ex-husbands violence and “he would sometimes get thrown across the room,” she said.

She made the decision for her and the protection of her son to divorce her husband in 2004.

According to Doležal, the decision to divorce her husband was a hard decision to make. “I wanted to have sort of like a perfect record, like there’s no room for error,” she explained.
“Probably because that was how I was raised, like it’s ingrained in me that I had to excel and if I didn’t excel, things were [going to] go wrong and so being a single mom is a failure, you know … that was not excelling.”

In 2006, Doležal developed cervical cancer. During chemotherapy, she decided to keep her incredibly long, blonde dreadlocks she had had and still puts them on today. She was considered cured in 2008.

In Idaho, Doležal took on the role as director of the Human Rights Institute, where North Idaho white supremacy groups burglarized every home she and her son lived in. Doležal said she believes the white supremacy groups felt threatened by female power. According to Doležal, they hung nooses in her home, vandalized and stole from her property, directed death threats toward her along with threatening to kidnap Franklin while he was in the second grade.

She reported all of these acts to the police and each was admitted into police records as hate crimes, yet the culprits were never caught.

Doležal moved from home to home and everywhere she moved, they followed. The hate crimes finally ended when she moved to Spokane in 2012.

With the experiences Doležal had throughout the years, she chooses to try to make change in the world as best she can.

Today, Doležal involves herself in any opportunities where she can to have a voice. She looks at her work as a continuing journey toward justice. Rather than becoming bitter, Doležal chooses to empower others to lead in their communities no matter what challenges she faces. She wishes to reawaken the sense of empowerment.

“It’s really painful from my mom and, you know, everybody that’s pretty much said they loved me at some point or were there for me, has betrayed me in a pretty significant way,” she said, struggling to find the words to describe her feeling. “And so it takes a lot of self-work to keep your heart open and just to engage in relationships and not get bitter and not get jaded.”